Daniel Cowper’s first collection, Grotesque Tenderness, questions whether we are the stuff of the former or of the latter. The first section, “The Life and Crimes of Sextus Tarquinius,” sets the stage. Among other exploits, Tarquin, fifth-century BCE king, raped his friend’s wife, Lucretia. The attack precipitated the overthrow of the Roman monarchy, but Cowper writes him living in the twentieth century, first during the Holocaust and later in California, unmoored and impugned as morality falls apart around him. The vernacular is contemporary, and the juxtaposition – and even some of the preoccupations – is reminiscent of Anne Carson’s The Autobiography of Red. But the poet’s choice to flesh out the backstory of a famous rapist, even though he tries to justify it in an endnote, feels more trite than right. Parallels between how a life and a nation can unravel notwithstanding, did modern times provide insufficient assholes? 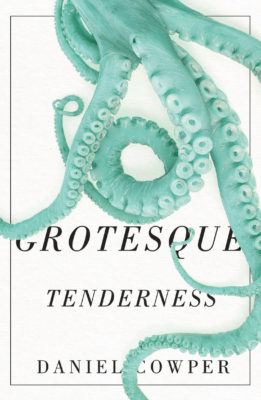 Cowper has a good poetic ear and instinct, and the book’s other five sections show he can use his powers more wisely (though women throughout tend to be so much furniture). Cowper’s gift is to imbue the aphoristic with meaning that is both disturbing and exceedingly human. “Much will be renewed,” reads the poem “Instead of a Christening”; “Children will linger by the shoreline till called. / But one will not come.” Yet whether we look to the future to soothe the past, or explain away crimes as old as (in)humanity, in the tussle between sin and salvation, innocence loses in the end. “What is,” Cowper finds, “is outnumbered by what’s not.” 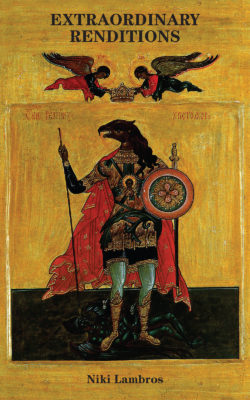 There is something theatrical about Niki Lambros’s Extraordinary Renditions. In the theatre of war, the play is long and unchanging. This first collection explores military conflict as a manifestation of evil. Her preoccupation ranges from the mythical, as in “The Brazen Bull” (about that most eloquently horrid of torture instruments), to the cultural, in a retelling of The Exorcist, to our contemporary bloodbaths, and to the personal. Is there a way out? Just get along already, though I guess that doesn’t make for very interesting poetry. Narrative possibilities are somewhat reductive – “they’ve got the oil this whole / fucking war was all about,” concludes a poem that aligns the Peloponnesian Wars with ISIS – and the unfiltered repetitious violence of a poem like “Boko Haram” suggests that language, stripped of lyric tension, overreaches, while metaphysics (“the souls of ghosts and devils”) feels expository. Metaphor comes closer, as when Lambros catalogues “the relics of the unselved” left behind after plunder. As she leans toward grace, the more self-reflexive poems let the reader see the poet’s struggle. The evidence of her research is touching – “The Jungle of Screaming Souls,” which references the work of Vietnamese novelist Bảo Ninh, is matter of fact in a way that suggests that any interpretation beyond fact would be intolerable. Throughout, religion makes an appearance, not for its frequent role as catalyst, but as a comfort. A museum, a patron saint, a prayer rope – they are amulets, “if only to remember / that these have no power / to heal, either.” 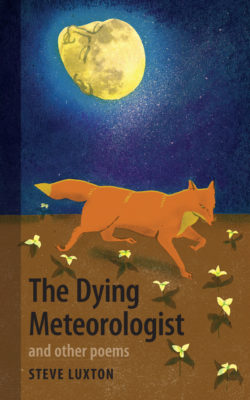 Steve Luxton’s sixth collection of poems, The Dying Meteorologist, is, as his earlier work has been, a moment in the author’s life poetically stilled. The first section looks around at aging and back at youth in poems about life after retirement. The aging poet who sets himself up for viewing in his canonical cage is wry, and tongue in cheek about “Age’s on-setting peevishness!” Each poem is comfortably about itself. There is an attention to concision, and the poet’s reaching-out is earnest. And why not; the thing about getting old is that you’ve gotten to get old. The book’s second, eponymous, section is a cycle that traces the illness and death of one of the poet’s best friends. The honest, confessional speaker and the bittersweet address are refreshing, as much as the elegiac can be. From the moment the speaker finds out about his friend’s pancreatic cancer – good news, bad news; the wife weeping; six months – to the sprinkling of his ashes the following spring, the poems examine that condensation of love that only a terminal diagnosis can bring. Poetry gives no explicit solace, but the language of lyric can be a reminder of transience: as the poet and his ailing friend stroll one late afternoon, they recall Yeats, and the “Eternal things. Of which the Poets sing… / So that when the light starts to fail, / and you’ve abruptly tired, / we turn home, knowing we’ve made / the most of our shortened walk.” 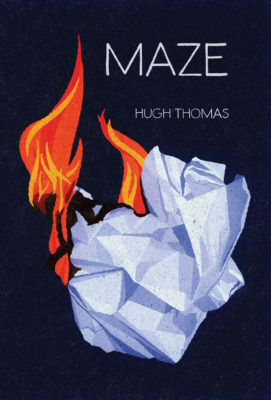 “I detail the verbal exchanges with the affronted voyager on distant terraces…” So begins “Unsigned City,” a prose poem in Hugh Thomas’s debut collection, Maze. The line could stand as the book’s summation or manifesto. A mathematician and frequent traveller, Thomas is drawn to complexification, decortication, to the play and the patterns of language and its collisions. Many of the poems in Maze use constraints; some are loose or sound translations, while others began as found verse. The result is trippy and good-weird, and labyrinthine without being tortuous: the premise is clearly just fun, and the poet sturdy at the helm. There are ways in, and a way out. For all that, Thomas is most successful when he puts down the structural pretexts and allows himself to walk through the world he has made. “Dream,” for example, is uncanny, as befits the titular state, but leaves off with a surprising tenderness: “We will count each other’s heads,” the speaker says. Another instance, the poem “Bath,” is rooted in a philosophical concept of the self – “It is always my bath / thatI am in” – and rattles through statements of bathing fact, the water rising, draining. Yet the ending deftly mixes the thinking self and the self inside the poem: “I shiver / in the cold air. / I have not yet / invented towels.” The language is deceptively straightforward, but the simultaneous presence of the body, the implicit undermining of subjectivity, and the whimsical bend of time bears rereading and rethinking. 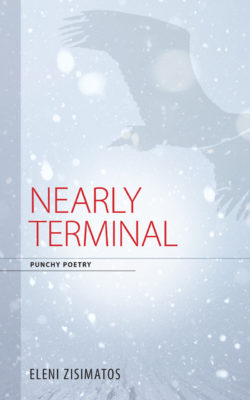 Eleni Zisimatos’s first collection of poetry, Nearly Terminal, is a book to read in winter, for the companionship of solitude and the hovering, precarious balance between nostalgia and hope that can make any meditation seem like a Zen koan. The first section gathers a handful of poetic sequences, while the second and third sections are made up of a single sequence each. Largely abstract, the poems allude to misunderstanding, darkness, and to a happiness somehow lost, relinquished, or stolen. Here are familiar gestures of recent lyric poetry – the second-person address, short lines meant to echo more than they convey – and here too are tropes of the Canadian contemporary idiom, from deer tracks in the snow, and ravens, and all that cold white, meant as a metaphor for the loss of the self. If Zisimatos seems to give in, to accept that we can’t get away from or tame the blanketing, blanking-out whiteness, she nonetheless throws in occasional causality or a narrative toehold: “The person I hate the most is the most / Undamaged,” the last sequence, an address to a beloved, asserts. Elsewhere, a piece that begins as a musing on the somatization of sadness hinges on the line “The child dead” without further context, before asking, “What and why / Is there a need for / Time // Or this.” The poems are untitled, often unpunctuated (and indeed unsentenced), and so open-ended they will either frustrate readers looking for muscle and awe, or please those who prefer their poetry epistemologically roomy. mRb
Katia Grubisic is a writer, editor, and translator.