Viola Chen’s debut, No Problematics, splits. In four chapter-long poems that cleave even at the level of form, the speaker tries their best to refuse it – “I would’ve saved the whole thing; / stopped the break before it turned upward” – by bracing themselves with momentum. They dodge, drop, sometimes dip into rhyme (“give a break, save the ache”). Their lines contradict. They know they are hiding. “This is all me just kind of faking and plating. / flaking and placating.”

Still, the emotion spills, “cluttering every departure”; they give themselves away. On the second page, they write, “Being a stupid baby, I took on stupid baby causes, / waiting for every morning to start to die,” and later we find out that the speaker lost a pregnancy. An ex-lover is introduced as the speaker attempts to avoid just that: “I would / need something else to write about – to sound fresh and good.” But here they are, “me, morning in the crack of another / fucked up basement.” Some things can’t be helped: “There’s nothing I love more than / talking about the same old shit.” 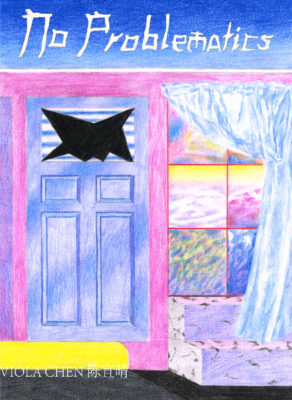 They tick off the impossibility of every interaction – “your name just / being syllables,” “how the body always acts in / response” – and how it is all exacerbated by the fact that the “ways in which we are compensated make no sense.” They repeat “Political parties / the political parties” twelve heavy times. They know their new pants “cost my dad three days of operating a / machine”; and they implicate the book itself. “I’ll make a career out of all of this.”

Despite the divisions – between worlds, loves, the self – their world crystallizes, emotion and setting calibrating, twice: when someone puts on her backpack in one fell swoop, and when they think, “What’s more gendered than a daughter to a mother / when she cries?” Still, they resist even the slightest coming together, any jostling. “Dear noise I had prayed to, having changed my room a little,” they say, poking at their own ragged belief. Even as “my huge head hardened” like a baby’s, meaning it was soft once. Even as “the side cheek of everything just squirting out / My horror and my own father, no one else.” They gnash.

Klara du Plessis’s Hell Light Flesh knows what hands can do. Across five long poems, hands “smear measures / of a day’s activity”; they “pressure […] tubes of paint, purging, / touch lapping up colour.” They “sting / their red shadows onto skin.”

“This could be / an immaculate space,” thinks the speaker, a child waiting for her father in his studio. She pulls open a light-filled drawer as “the strap hangs silently / on a peg beside the door.” When he “turns left out of the bedroom / and left again into the main corridor, / up the stairs,” the house shrinks. The speaker thinks, “The word brushstroke includes at once / the quick contact of skirmish / and the immediate violence / of repetition.” Everything in this book, this house, is both: a place to hide, to be caught. 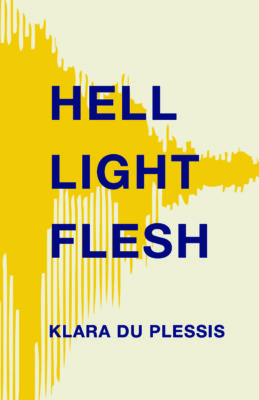 The bothness of violence and art in Hell Light Flesh – “Violence […] is wrapped up / in the ability to create at all. / To lay down the law of self” – points to their shared act: material change. The speaker’s mother cleans her paintbrush, turning water into a “stuttering / elixir of colours”; the speaker remembers “the absolute strangeness of glass”: “sand, silica, mineral quartz” turned into a “transparent sheet.”

On the page, du Plessis treats words as material. She drags letters down a page like mud – “sa / lt / ed / st / icky / wet / we / lts / ru / nn / ing / thi / ck / ly / do / wn / ch / eek”–and turns every feeling into a solid. Of a sound wave visualization of “a belt hitting flesh,” she has made nine visual forms: windows, trees, forests. Sharp blocks of ink that almost hurt to read, even as they are turned into something else. “This window is a garden,” and “Sound waves are a fence.”

A self, too, can undergo violence, art, material change. “Back […] turned away from my father,” the speaker walks toward paintings “with their backs turned.” In the final poem, locked in the bathroom, she looks up: “I present myself to myself.”

Fingers full of moon dust and different dances of light, the poems in Yusuf Saadi’s debut, Pluviophile, wander into their own imaginations. Eve invents poetry when she thinks, “there are whispers in the letters”; Van Gogh worships the moon in saffron. “Words fall like fruit” from Rilke’s “ripe” hands. The poems follow the dead through Montreal’s streets; they listen as a Twix wrapper crinkles. Saadi writes poems that could never fathom each other. 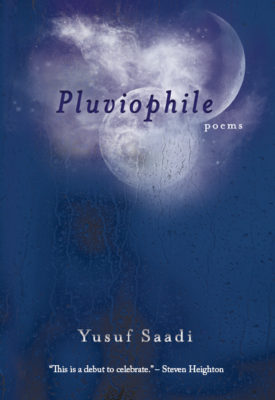 These worlds take every form, from sonnets to love poems to blocks of purposefully noisy prose. As they buzz, Saadi taxonomizes their sound: into a glossary of air, a dictionary of a road trip. He understands the loss inherent to letting anything go from a mouth, writing to words that died “without / eulogy – no holy words for holy words that burned.”

He wants to do something with all of his tidy syllables – “Why can’t we harness sound for energy?” – so he does it himself. He tracks the world’s prayers by listening, his “blistered / toes antennae.” In a single poem, a parking metre prays, a beetle prays; so do “three broken beer bottles,” “a parched pen,” and a dream catcher. “An empty / bottle of spiced rum hums a lullaby.” He makes every page whistle. The noise culminates in a single moment of silence: when “my tongue / is to caress – / not to speak.” mRb