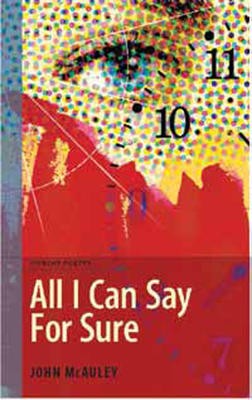 All I Can Say for Sure
John McAuley

John McAuley, one of the Vehicule Poets who were so influential in Montreal circa 1975–80, published four books from 1977–79. His new collection, All I Can Say for Sure, is so good that the long silence must be regretted. The first of the four sections comprises what appear to be autobiographical reflections on the childhood, youth, and career of the poet. These somewhat garrulous poems, however, are less interesting than the ones that follow. The second part, Northern Love, has a youthful intoxication checked by the sobriety of age and experience. One phrase sums up the tone: “Eden Interruptus.” The joy in love poetry is tempered by an awareness of mortality, as Shakespeare showed in his sonnets. McAuley’s love poems rely brilliantly on figurative language with comparisons drawn from astronomy, nature, and even grammar. In fact, the third section of McAuley’s book is called A Poet’s Grammar. It is as if this Canadian poet wanted to rewrite Horace’s Ars Poetica, emphasizing basic units such as nouns, verbs, adjectives, and adverbs. Most poets since the early days of modernism shun adjectives and employ adverbs sparingly, but McAuley actually catalogues some of the uses of adverbs in poetry. These few pages on grammar are followed by a group of free translations from Latin poets: Catullus, Tibullus, Virgil, and Ovid. The translations are thoroughly enjoyable – freedom here means exuberance – and must have nourished McAuley’s Northern Love sequence. He can make a translation into a poem of his own by judicious expansions of the text. For example, his version of Ovid’s story of Daedalus and Icarus gets an original concluding line: “Everyone has a dead bird story / close to heart.” McCauley’s book is rounded off with a set of poems on historical and scientific subjects – ranging from Virginia Woolf to Percival Lowell (the astronomer who thought he saw canals on Mars) – as well as tributes to Leonard Cohen, Leo Kennedy, and, of course, the late Artie Gold, a member of the Vehicule Poets. He also presents entertaining poems about moon exploration, Theodor Kaluza’s theories of the fifth dimension, and “Ma Yu Ching’s Bucket Chicken House, Kaifeng, China, the World’s Oldest Restaurant.” These objective works balance the subjective tales of the opening section.

The world since the 1970s has not passed him by: he writes an ars poetica in tweets and a lipogram: “For Socrates This Lipogram in A.” The only shortcoming of the poem, a touching account of the death of the great philosopher, is that the reader would probably not notice the complete suppression of the vowel “a” in the poem if the title had not pointed to it. The constraint is not extreme enough to be noticed. 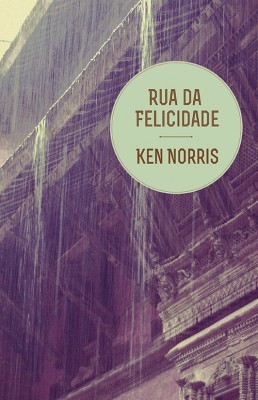 Ken Norris is another Vehicule poet. He has written at least two dozen books and chapbooks. Rua da Felicidade is his best work in years. As usual, he has written a book full of travel poems, set in tropical regions: Macau, Bangkok, Singapore. But the amorous element is not so conspicuous as before. In place of current love affairs, he remembers old ones with nostalgia. The book has a pervasively sombre tone: he expresses compassion for beggars and, most of all, for tsunami victims. The title of the book, meaning “street of happiness,” is ironic: it refers to the red light district of Macau. “Friends, it’s a surprise / to all of us / that this book could possibly end / on the Street of Happiness.” The irony comes because the preceding poems are so melancholy. In a different key, Norris’s “Pushing Against the Form” offers interesting insights into the art of poetry, declaring that “we” (perhaps the Vehicule Poets) were best when pushing against form rather than merely serving it.

Peter Richardson is a virtuoso of form and he pushes it hard in Bit Parts for Fools. So many of his poems are written in neat stanzas, but he stretches the forms over and over by letting the syntax of his long sentences run on from stanza to stanza. When contemplated on the page, the stanzas suggest self-containment, but the sentences often overflow their banks, carrying the reader along with the stream. He can use remarkably long lines with skill in an age given to rather short ones. Richardson likes to create dramatic monologues and narratives. Only in the third and final section of his book does he turn to personal narratives about suburban life (especially bird watching) and colourful relatives. The erudition in his invented stories and monologues ranges widely: he deals with poison gas in World War I, trains on the Eastern Front in World War II, and the lives of renegade Roman legionnaires in AD 9. The poison gas poem, “Song of the Canister’s Contents,” is particularly powerful, although the full effect comes only when the reader encounters the note on the poem at the end of the book. Richardson’s poem about the late Ralph Gustafson, “Of Cordwood and Chrysanthemums,” is a fine tribute to one of Quebec’s best poets. Richardson shares Gustafson’s precision and his astringent view of the world, as well as his interest in birds and backyards. He brings the man and his somewhat neglected work alive for us. Amusingly circumstantial titles are a feature of Richardson’s writing, and two of the best are “Dr. Gomez’s Return from a Sunday Botanist’s Field Trip” and “Listening to a Recently Dried-out Lena While Watching Harold Lloyd Hang from a Clock Face at The May- fair.” As for the title of his book, he makes fun of human folly, but participates in it, as displayed in “Test Flight,” a poem in which the speaker’s model plane has a comically catastrophic journey. 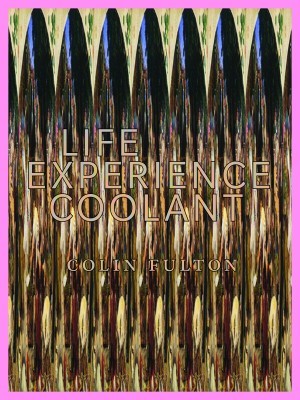 Colin Fulton works with unusual sources to create poems that are compilations based on found materials, reminding us of Nennius, the ninth-century Welsh monk who said of his Historia Brittonum: “I made a heap of all I could find.” The title poem of Life Experience Coolant is a heap of complaints and provocations drawn from the comments sections of online blogs and forums. There is even a jargon expression for such carping writers: Internet trolls. Fulton takes such materials (rambling, irascible, or pedantic) and turns them into comedy. The pages are divided into four squares with materials running on from square to square: upper left to right, then lower left to right. The typography in these blocks is justified even if the complaints are not. The only complaint to make about his poem is that a little of this material goes a long way. More interesting is the work called “36C 8A,” his redactions of John Ruskin’s long notes on the capitals of columns. Fulton works not from the Victorian writer directly but from Jan Morris’s redactions of Ruskin’s writing; we are therefore twice removed from actual objects. Fulton’s typography turns the descriptions of the capitals into visual simulations of the architectural feature. Typography illustrates content. The other sizable composition in the book is “Red Horse/Judges,” a series of prose poems reworking texts from Open Parliament, an online archive of everything said in Canada’s legislature. Needless to say, the level of the prose – a heap of public language – is not elegant, which is surely the point. The parliamentary materials are often complaints; although, they are a little more sophisticated than the griping of Internet trolls. Fulton is very skilled at what he does. Readers of mainstream poetry will probably grow bored with this book, but those who love experimentation will be drawn in by his ability to play freely among the signifiers and push the notion of form through typography. 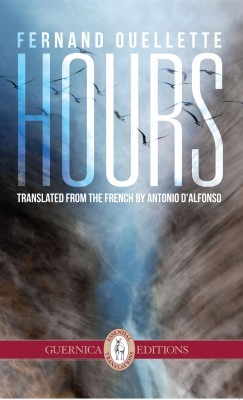 Fernand Ouellette is one of Quebec’s finest poets. His Hours commemorates the death of his father. It is much less detailed than Pierre Nepveu’s long elegy for his parents in The Major Verbs (reviewed in mRb, Spring 2013), but it has an austere self-possession. Ouellette does not approach his father’s passing with the sort of clinical information that we often receive in poems about dying parents. Rather, he sees his father’s passing as a solemn and solitary event in spite of the presence of the grieving family. In so much contemporary poetry, the description of tubes, monitors, and extreme interventions makes a death scene more vividly present to the reader, but Ouellette seems determined to preserve the dignity of the dying man, to value his spiritual isolation. As he becomes a “strange planet,” a dying person can offer a certain access to freedom to those he leaves behind, by the example of his solitude. The translator, Antonio D’Alfonso, has produced a readable work in English. His afterword suggests that the French original bends the language in innovative ways. That does not come across in the translation, but D’Alfonso conveys a strong sense of the solemnity of the occasion and the way that it is commemorated. mRb
Bert Almon lives in Edmonton, Alberta. Retired from teaching, he follows the careers of his former students.