Written against a backdrop of global migration caused by war and famine, the global and social movements in Rachel McCrum’s poetry take on many tones, swaying from memories of privileged Irish-Scottish immigration to the narrow escapes of refugees by boat in the night, each with its own quotidian feats and traumas. Originally published in 2017, The First Blast to Awaken Women Degenerate gets a well-deserved second wind in its bilingual version, imbuing McCrum’s multifaceted poetry with a layer of interpretation through translation (bilingualism has its perks).

Her poems follow the flow of people between physical, social, and psychological borders, digging into meanings of displacement, home, and homeland. Within this, she addresses social mobility for women coupled with ongoing harassment and violence, where even big wins come with equal losses. The demand here, especially in the titular poem, is not only for more room to move but to speak, to be heard, perchance to affect change, always to contain raging multitudes.

we roared
and with those waves of sound
we tilted the city:
cetacean gulping,
we sank the silence. 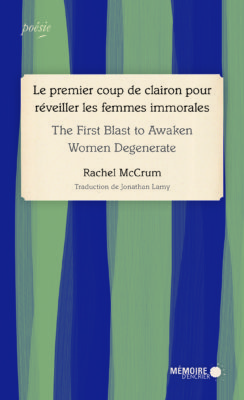 McCrum delivers many of her poems with jabs of wry humour, as in the pop-cultural inspiration of “I am Gigi Hadid’s Left Elbow” and in “Problems to Sharpen the Young,” where standardized testing language reveals the inequity of tragic circumstances and the test’s final question – “Whose teeth are sharpest?” – is both ironic and menacing in the context of running for one’s life while being chased to death. Clearly nestled in such side-eyed wit is anger, frustration, disappointment, and sadness, which pervade the book for good reason. In “Tomato Sonata” McCrum has a good explanation as to why:

this implacable comedy, this thing
that reminds me, as we click rage and spit
pixels of fruitless ire and ego –
not only those with the loudest voices sing.

Written over 14 years, Sarah Venart’s I Am the Big Heart explores the conflicting realities, impromptu joys, and gut-wrenching pains of parenting, from giving birth to grieving one’s own parents’ deaths. Stretching back to her and her parents’ childhoods and fast-forwarding into the recent past, Venart is in fact confronting life itself and the varied loves that crack a heart wide open, for better or worse. Opening with the suitably titled “Epiphany,” I Am the Big Heart proves its title to be a question, packed tight with even more personal inquiries, many without answers.

Metaphors were easy then, not only the sky,
but migrating everywhere.
And now everyone is arrow
arrow, arrows. Everyone harpoons.
And I am the big heart, aren’t I?
When my black dog was being put down, in her last second I whispered, Squirrel. 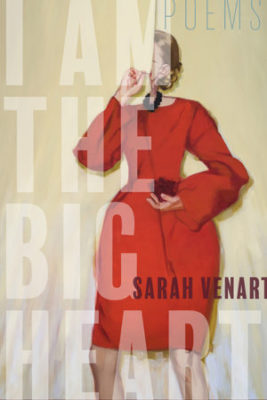 I Am the Big Heart
Sarah Venart

Entering parenthood doesn’t necessarily increase the size of a person’s heart, but it does make the heart a worthier, more obvious target for every emotion aimed at it. This heart accepts the disconcerting unknown and the reliable, inevitable death alongside unfolding life, loves lost and gained. As Venart ranges across her past and the people who’ve made their way inside her heart, she shines an even-handed light on life’s unknowns. In “The Midwife Advises Me,” she finds existential clarity from her newborn:

Why hold on to what hurts? The blue milk
of your eyes says, Make room for what’s good.

This tilted love story to the heart wends its way through five distinct chapters to “Darling Citizen,” where parenthood and youthful individuality collide in desire and emotionally resonant reason: why not want, why not be mercurial, why not open up and let go?

The heart knows what to do, what not to do again.
In earth years, my heart is ridiculously young.
It blinks closed, it glistens open to herd the blood.
It’s the red eye waiting for the lunge.
It parts my reeds and silt and lifts me out.

Hierarchies, power plays, and questions of hatred within so-called tolerance rear their heads throughout Check, Sarah Tolmie’s latest book of poetry, but rather than philosophizing, Tolmie gets to underlying social truths through perceptive satire. Tolmie even gives some backhanded praise to the Pope, though maybe not the Church (“Sometimes saying the obvious thing / Is perfectly satisfying”). Whether we’re hairless apes on the job, weary parents, or well-dressed teenage girls, and whether we want it or not, we all have a squad, give or take a member – therein, of course, lies both kinship and strife.

Culture is war. Everything that’s said
Is disagreed with, A to Z.
What then do you ask of me?

Without titles, Tolmie’s poems ease into one gripping narrative despite their distinct styles. Perfect and slant rhymes that please the ear and readers’ wit are embedded in the causal language of conversation, albeit with a poet friend. Pithy couplets and tercets hold their balance between joke and aphorism.

The world is one big leading question
Slick chutes and boxes made of teflon.

Tick boxes, gun sights, Instagram accounts,
Shunt all the people where we want
Them to be:

Following, or far away. 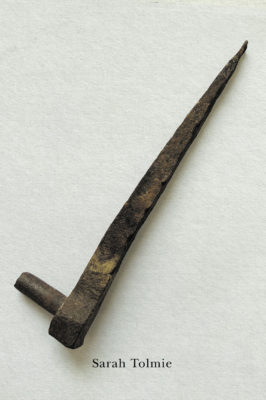 Probing corporations, academic institutions, families, friendships, and the consequence of both pop culture (Benedict Cumberbatch gets his due) and poetry (or at least social-media poets), Check roots out the slippery nature of consciousness, asking what is noticed, what isn’t, what is elided in favour of not seeing the truth. With the dark humour she threads throughout her work, Tolmie also lambastes words that have become meaningless jargon in certain corporate hands, especially appropriate for these online pandemic days:

Digital means I give you the finger.
And virtual is the scent that lingers
In a room full of wannabes.

Throughout its five chapters, Pearl Pirie’s Footlights contains a mind-whirling number of almost timeless observations on the world. Whether aging next to a young tree or spilling a Diva Cup in the woods, the poet searches out ideas and meaning while questioning the nature of existence and the universe. Adding to the intrigue, Pirie doesn’t place herself right in the middle of her poetic observations, but is rather another part of the unfolding action, an implicated eyewitness, even in her own work, as “in a state of reception” implies:

waiting for the list
to become a poem
and enlighten me.

In a conscientious variety of poetic forms and tones, quoting well-known writers, grade-school teachers, and Instagram posts, Pirie draws attention to how subtle creative choices can shift perspective. In the parallel non- rhyming couplets of “what follows,” she hits that message home:

just say you had a healthy baby.
don’t declare a gender..some girls have penises.

even lemmings aren’t as we thought but
people follow fascists because they lead.

if a few of us survive, our successors
will have as much to do as we do. 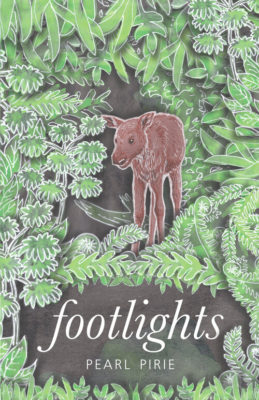 Pirie is able to rocket from tangible mundane objects and actions, like cereal boxes and walking, to cosmic abstractions and imagined scenarios well outside her own field of observation. For one, a heater enters into a brief, tense relationship in “in the room grown dark”:

it isn’t. it falters at holding the
connection with you

but even electricity
wants to continue.

As if her poems were a metaphor for how to live outside the confines of expectations, no matter what happens in them as they go, Pirie keeps trekking toward their often curious, provocative conclusions – naturally making them very rereadable.

Inspired as much by nature and relationship as the conceptual, The Eleventh Hour, Carolyn Marie Souaid’s eighth collection, connects everyday observations of the present – breathing, aging, the desire to dance wildly – to surreal and spiritual moments that exist outside of time and the body. Yet thankfully her poems’ feet don’t entirely leave the ground and everything stays interwoven and relevant to materiality, as “No existen lindes para el amor” confirms:

or anything. It could be a concept.
The details don’t matter.
Boundaries do not exist for love. 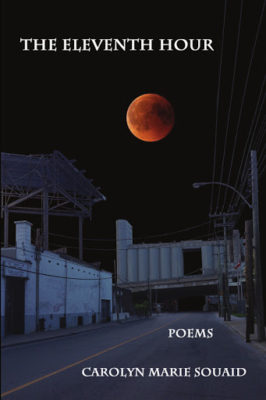 Elegantly judicious with her words, Souaid reflects a clarity of thought on the daunting subject of mortality, shift- ing focus to duende, the emotionally heightened human spirit “orbiting the nucleus of time.” A balm for these strange times, the poems of The Eleventh Hour span sandy beaches and wintery Tuesdays, Christmas shopping, and parents’ hip surgeries: “the quiet theatre of our lives,” she writes, soon after referencing the Ottoman Empire and the Great War. History is made personal through this poetic storytelling and the end of people’s lives made bright, as in “Their Death Projects” (celebrating the lives of Montreal writers Richard Sommer and Susan Briscoe):

Seems she and Richard just did what they did—
like the ancient warriors who lived the adventure,
the Great poets who made art of their undoing.

Souaid is naturally funny too – again, thankfully – as she illustrates the less romantic yet nevertheless meaningful and memorable parts of life. “Still Life With Slippers” harkens back to driving an old Dodge in search of “an alley to fuck in, / a place to celebrate the electrical storm. / Husband: still now I speak of love.” She says what needs to be said, with care and spark, and reminds us to speak those things out loud too. mRb