The Enterprise of Light

Cora Siré’s outstanding debut has material for several books. Her subjects include travel, exile, geology, works of art, and Latin American history. The travel poems are not quick tourist snapshots: she has an impressive knowledge of Vietnam, and her poems about Argentina’s sad history have tragic depth. The personal themes – diasporic dislocation, the struggles of love – are as piercing as the quena, the Andean flute that she writes about in a poem of brilliant metaphoric phrases, the equivalents of musical notes. 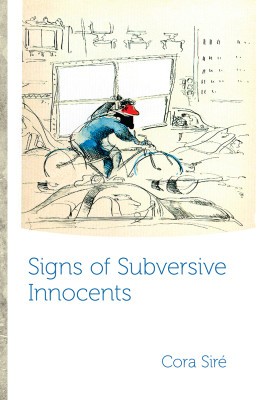 Her poem “Zeitgeist,” which is illustrated on the cover, describes an artist cycling through a dreary December cityscape carrying a large canvas that bears a work of art created in a “generous space.” In spite of the masculine pronoun given to “this guy,” he seems a reflection of the poet herself. The generous space of this book is filled with formal ingenuity, ranging from rhymed stanzas to glosas based on the writing of the Uruguayan poet, Delmira Agustini. Her tour de force is a double ethere, a tribute to Leonardo da Vinci best read, she says, from the bottom up and from right to left. Da Vinci used mirror writing as a code, which makes the tribute appropriate. Occasionally her rhymes are excessive – sounds placed too close together or too strained to work – but these are excesses of exuberance. Her range includes the plaintive Andean flute, but she commands an orchestra.

Larissa Andrusyshyn’s first collection, Mammoth, explored grief by making fine use of imagery drawn from DNA and paleontology. In Proof, she extends her range of metaphors to include mathematics and entomology. Mathematics lets her create unsentimental poems about a potentially sentimental subject, known in creative writing workshops as “the break-up poem,” a dangerous subcategory of “the relationship poem.” She is served well by her knowledge of commutative qualities and the work of Euler and Fermat. Think of Andrew Marvell’s use of plane and solid geometry in “The Definition of Love,” published in 1681, with its planispheres and parallel lines. Is Andrusyshyn our modern metaphysical poet? 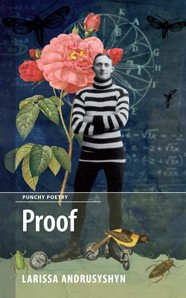 Her audacity in using the “Ew!” factor in a set of poems about insects is impressive. Literature has never included poems about “Sex Lives of Leopard Slugs” or “The Diving Bell Spider.” John Donne, who brought scientific imagery into his poetry, would be impressed. One of her best poems, “The Genus Nabokovia,” uses facts about the butterfly discovered by and named for Vladimir Nabokov as a means of describing his work and his relationship with his muse/wife, Vera. It’s a shame he isn’t alive to read it, especially the daring line about the butterfly having “photoreceptors in its appendage— / it sees with its genitalia.” The fondness for declarative sentences in this book, combined with the short lines, gives it a brisk, tonic quality. The title poem lists various meanings of “proof,” though she does not include the term as used in the field of numismatics to denote coins of exceptional quality struck for collectors. Her work is a proof copy in this sense: polished to a shine.

Mary di Michele’s The Montreal Book of the Dead shows how well a chapbook works when it has a theme. Most of the ten poems in this pamphlet are about people who are either literally dead or suffering from failing memory. Nearly all of the poems are written in stanzas, usually quatrains or tercets, but she also writes a glosa and an unrhymed sonnet. Her syntax is precise and well suited to these meditations on death, aging, and memory. Some of the poems are elegies for her parents, but another theme is dementia, a shadow of death. She doesn’t hesitate to generalize, offering a gentle wisdom: in “Forgetfulness” she observes that remembering is hard for the old, but forgetting is difficult for the young. In “Scotopia” (the term for seeing in dim light), she takes us to the top of Mount Royal at night, and then delivers an epiphany, a vision of the world from the stellar perspective, seeing it as a whole: “we all bow to the darkness, / we all turn in the light.” In faint light, illumination is born. As Wittgenstein said, “the feeling for the world as a limited whole—that is the mystical.”

The Montreal Book of the Dead
Mary di Michele

Di Michele concludes with an unrhymed sonnet, “Somewhere I Have Never Traveled,” saluting the well-known poem by e. e. cummings. But while cummings’s poem is an ecstatic vision, di Michele’s work is a troubling hallucination. The narrator finds herself at the Canada-United States border, but the outpost is unmanned, with no one to inspect the passport that proves her existence. In an eerie moment, she finds that the passport photo doesn’t “look like me.” She is neither here nor there, and like the dead in folklore she casts no shadow. After a series of elegies for others, the author finds herself in a hallucinatory state between worlds, the kind of ambiguous state described in the Tibetan and Egyptian books of the dead. A border crossing, indeed.

The best poetry in Stephen Morrissey’s A Private Mythology is found in the sequences. His 2012 chapbook, The Coat Poems, is included in the first section of the new work. He makes some amusing and often moving variations on the garment: “The Homeless Man’s Coat,” “The Poet’s Coat,” and “The Shaman’s Coat,” to name a few. The garments become metaphors for themes like love, poverty, the self, and the writing of poetry. Hints of childhood in a dysfunctional family in “Mother’s Mink Coat” are elaborated in several later poems. 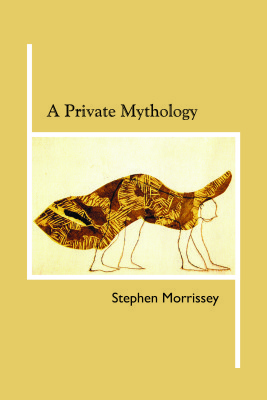 The most interesting sequence is “The Great Year,” which reflects Morrissey’s long interest in astrological signs and his understanding of anthropology. The Great Year is a cycle of around 26,000 years, each portion of which is marked by a dominant constellation. W. B. Yeats worked out the scheme in vast detail and used it to explain all of history. Morrissey covers the period from the Age of Virgo (13,000–10,800 BC) to our present Age of Aquarius. He naturally exploits the symbolism of the astrological signs ruling each period, especially the animals. The poet has researched the epochs of human history from the Neolithic onward, and he describes developments in material culture and shifting mythologies. In the last poem of that cycle, he has his own vision of the world, seen from space as one living being, a fitting epiphany that puts our history in cosmic perspective.

The autobiographical works in the book’s last section mix love poetry, discussions of the poet’s calling, and family stories. Most of the love poems have only their sincerity to recommend them, and the remaining poems often fail to make his private mythology (his family history) interesting enough to others. The most memorable lines of the book are in “Waking at 4 a.m.” Morrissey tells us that “this is when the poem / of morning is created; / we are workers in the darkness, / early risers, busy with / the enterprise of light.”

The Poetic Edda, also known as The Elder Edda, is an Icelandic compilation of Norse myths and narratives dated around AD 1000. The texts convey a pre-Christian world that is often startling in its violence and its rather incoherent mythology. The Icelandic sagas written centuries later are better known and easier to find. The Edda is a distillation of a culture: its religion, its legends, and its wisdom. The best-known presentation of the Edda for common readers is a fairly short selection prepared by a poet, W. H. Auden, and a scholar, Paul B. Taylor, published in 1970. Jeramy Dodds is a poet and a scholar both. He describes his work as a re-enactment of the written texts, taking whatever liberties seemed necessary to produce a readable English version. He works at keeping the terse lines and the all-important alliterative patterns of the originals. Auden and Taylor are sometimes a little stuffy, almost archaic, but Dodds is always direct and not likely to sound dated a generation from now. 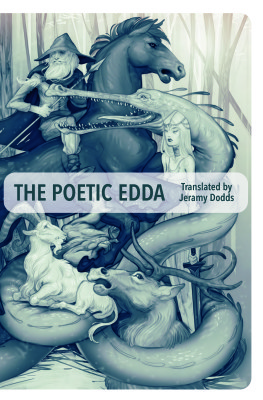 These poems do not have the power of their close literary relations, Anglo-Saxon poems such as Beowulf, “The Wanderer,” and “The Seafarer,” but they capture a seemingly alien world view that can refresh us precisely because of its strangeness. The annotated list of names consists of twelve pages of fine print, and nearly all of the entries will be unfamiliar outside a small academic circle. Coach House has done an elegant job of presenting these texts. The layout and typography are distinguished. In the spirit of the Vikings who settled Iceland, Jeramy Dodds has raided an archaic culture and brought home loot for us to share. A good translator has a streak of piracy in the soul. mRb
Bert Almon lives in Edmonton, Alberta. Retired from teaching, he follows the careers of his former students.