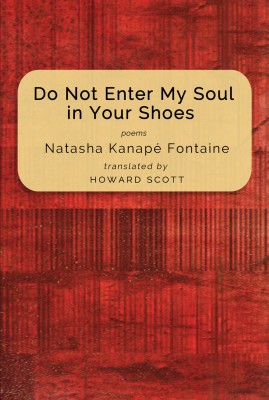 The title of Natasha Kanapé Fontaine’s Do Not Enter My Soul in Your Shoes is a request for listening. There are many rewards to be found in honouring Fontaine’s invitation, to being attentive to her imperatives, from the urgency of “stop breaking my erosions with your boats / let me finish!” to the dreaminess of “Come melt the blue of our broken jubilations.” This is an English translation from French, by Howard Scott, of the debut 2012 collection by Fontaine, who is an Innu of the Pessamit community along the north shore of the St. Lawrence River. Exploring questions of identity, she presents parallel worlds, weaving Innu words and phrases into her work in a way that the rhythms of two languages play off one another beautifully. Fontaine is a slam poet who is equally compelling in book form. Pared down to their most necessary elements, these stanzas weigh every word and its definition(s), making space for wordplay and multiple meanings: “There is summer as there are reservations / between us.” This collection is interested in relationships, between family members, lovers, land, homes, and the threads that connect the past to the present.

Fontaine’s syntax is consistently surprising, her imagery sensual and immediate. Lines like “Your teeth laced up my vertebrae / your eyes are muddled with cedar / our bed of dead leaves is furrowed our hunts / purged of your cider” demand to be sunk into. She tackles big, expansive emotions but sidesteps cliché, always returning to the precise detail, the “shore / braided with white pearls.” A crucial voice. 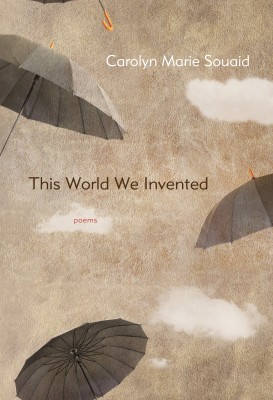 Carolyn Marie Souaid’s seventh collection, This World We Invented, also delves into themes of personal and collective identity. Souaid presents origin stories and life cycles, blending notes from history, religion, science, and imagination. The first section, entitled “Sketchbook,” uses components of visual art (scale, pattern, perspective, symmetry) to ground reflections on life and death. Souaid’s insights are particularized by her light touch and ability to telescope from the micro to the macro. In “Shape,” the speaker asks, “Where in the dryer does the missing sock go? / And to be dead, what’s it like?” continuing, “Actually. / Now that I’m fifty, things don’t fit so well. / My clothes, for instance.” By the end of the poem, we have left this domestic scene for “Algae unaware of love or loss, […] / only the pulsing yes/no of being here for a time, / and then not.” These kinds of leaps are a signature mark of all the best poems in this collection.

The second section, which shares the book’s title, documents chaos, decline, and a sense of unease, but also hopefulness in parenthood, recovery, and pressing on. Souaid witnesses the world’s messiness without reaching for tidy solutions, recognizing instead that “There’s just one crested wave. / And then another, and another.” This collection pivots and turns, speaking from diverse vantage points, illustrating a line from “Collage”: “What you need to say has many rooms.” 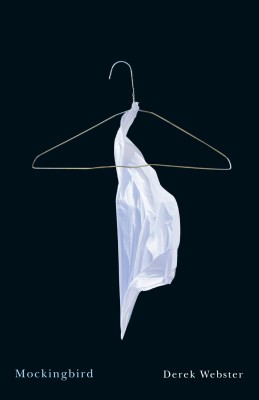 Mockingbird is the first collection from founding editor of Maisonneuve magazine Derek Webster. Motifs from fables and fairy tales – a small red hood, a woodcutter, a she-wolf – flicker in and out of these poems, in lines that are lilting and dark. The inventory of months in “Calendar” and lines such as “Do you dream of rending wrong from right? / Good luck, my darling, good luck and good night” in “Nursery Rhyme for Big Brother” bring to mind children’s verse, with a twist. Dream and waking worlds overlap, often in eerie or frightening ways: “Coal lids closed, it leaps into the air. / Giant shadow rows. Outside the dream / someone knifes the dreamer.” Focusing on themes of domestic breakdown, these poems feature characters that emerge as recurring archetypes: angels and monsters in shifting forms, the neglectful mother, a lonely child. The poem’s speakers tend towards endings with disillusioned or bitter notes, as in the myth-revisioning “Orpheus”: “I must walk the length of my life / yammering about patience, joy and love / until I hated singing / and hated you.”

Like the titular mockingbird, Webster echoes the voices of others, referencing Larkin, Hughes, and Dickinson, and nodding to traditional forms. He frequently employs rhyming couplets; these are most satisfying when their rhymes are somewhat unpredictable – “Woodsmoke’s listless curlicue— / what’s left of what you thought you knew” reads musically over “Rat moving at your feet / A car in the street,” for example. Webster’s vision is at its starkest and loveliest in the book’s penultimate section, where he turns his eye to an idiosyncratic set of birdwatcher’s field notes, an eclipse, a pelican’s “beauty’s folded awkwardness,” and “mist like a cat creeping up the lawn” – images that retain their mystery, allowing us to draw our own conclusions. 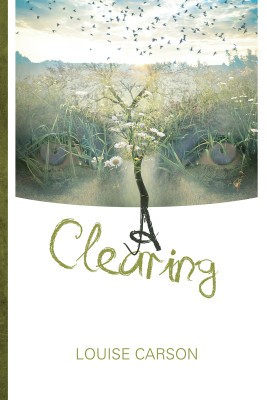 Louise Carson has many journal, chapbook, and anthology publications, but A Clearing is her first full-length collection, released by Signature Editions at the same time as her mystery novel, Executor. Carson’s poems document the natural world and personal wilderness(es). Her voice is wry and honest; “Yes, it’s really like this where I live,” she writes in “Muskrat dives,” acknowledging the reader’s presence as she organizes the seasons, flowers, animals, and musings of her world in rural Quebec.

Despite occasional moments of heavy handedness, many of these poems show a knack for saying just enough. Trained as a musician, Carson experiments with different tempos and capitalizes on the possibilities of variation and repetition. Her carefully considered rhythms range from breathless lines that spill into one another, to shorter ones that unfold slowly, emphasizing silences and white space on the page. Carson’s concise and elegant descriptions are most memorable when they push into a subtle strangeness – the man who steps into the shower, “swimming goggles adjusted”; the woman who “asks everyone she meets: / did you bring me my new face? Did you bring me one with a bright / curved beak?” Carson uses a matter-of-fact tone to avoid oversentimentality, as in “29 words on solitude”: “Sometimes chosen, often not. / Society can tell. / I’ve got emotional leprosy. / Bits of me are dropping off. / Not so bad. When I walk out, / I can hear my bell.” These poems meditate on the potential to be found in small moments, in personal “clearings,” as Carson articulates in “between times”: “in between / is when / I sail the seas.” 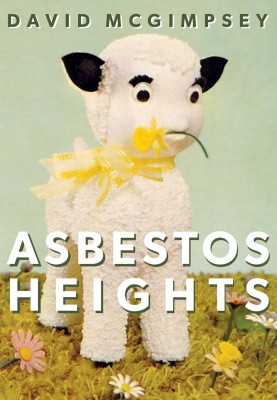 AAs the blurb on Asbestos Heights explains, David McGimpsey has been “implored by concerned readers to be ‘classy’ and ‘real’ for once.” So McGimpsey takes on canonical poetic themes, folding these to hilarious effect into his fixations with sports, fast food, and pop culture, familiar from previous collections such as Li’l Bastard and Sitcom. As a result, lichen creeps over Taco Bells, crocuses are Instagrammable (or not), and a poem titled “Lady’s Slipper” ends on a Beyoncé lyric. McGimpsey satirizes the CanLit microcosm, pointing to “towns / where Canadians happily live their lives, / unperturbed by who was excluded / from the Can Lit? Can Do! anthology.” The jokes are non-stop, delivered with the straight face of formal rhetoric, in seamlessly constructed quatrains.

At the same time, McGimpsey is interested in sincere emotional expression, whether it comes from a poem or a Taylor Swift song. There are many self- deprecating and bittersweet moments here, too, whether in the form of a therapist who couldn’t be less interested in her client’s poetry, or a quiet memory: “My father, at ninety-nine, could not / recognize his favourite Yankees’ faces / but knew their body shapes, averages / and what they did their last time at bat.”

The writer’s attempts to be “classy” unravel over the course of this set of “canonical notebooks,” as signalled by the titles alone – we go from “Nasturtium” to “You may remember me from the smallpress Canadian poetry titles Sugar Shack Parson and Midnight Call to Petawawa.” The effect is dizzying, in a good way. McGimpsey is pure reading pleasure. mRb

Jaime Forsythe is a Halifax-based writer. Her first collection of poetry, Sympathy Loophole, was published by Mansfield Press.