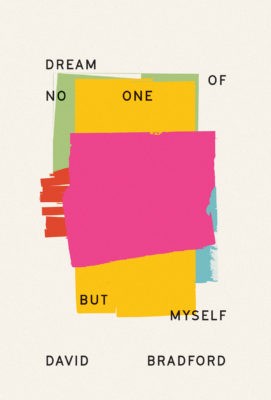 Dream of No One but Myself
David Bradford

David Bradford offers a one-way ticket into his memories with Dream of No One but Myself. There’s no going back from this unforgettable place where the past constantly converges and unravels – where paths of understanding are opened through art and process.

A founding editor of House House Press, a Tiohtiá:ke/Montreal-based publisher focused on radical BIPOC writing practices, Bradford inquires into his own and his parents’ interconnected experiences, stepping into different personae and cadences. Dreamlike, narrative threads are held together by captivating lyricism, interspersed with reflective essayistic passages, confidential footnotes, self-defaced writings, and collaged photographs and ephemera of childhood that ground the book.

Now the month and six
.  hours in between lifelines
……………a white noise machine

Bradford’s collection of form-and-font-shifting poetry manifests a familial mystery that looks less for solutions than laying his own and others’ memories bare, however unreliable or ephemeral they may be. This anti-hero’s quest is shared piece by piece, not in aphorisms but a collection of poetic complications of identity, race, and intergenerational trauma.

Parents’ memories and lives bleed into their children’s and, over time, memories and their meanings alter into a collage. Bradford’s mosaic shows how permeable the boundaries of oneself are, breached or blown up by all the stories and seemingly small things that compose us.

His old value human gift.
Dust in a pine can. Six

years in the Delaware
I ain’t ever getting back. No

plot. Ever safe from anyone.
Too late to help. Or stop 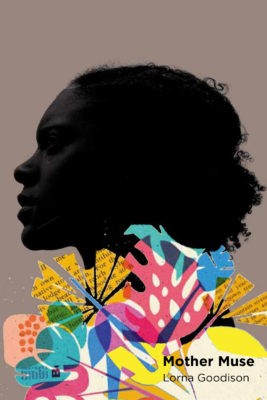 In her newest collection of poetry, the former Poet Laureate of Jamaica and Commonwealth Poetry Prize winner revisits perpetually resonant themes found in her previous writing, from the untold stories of women in her own lifetime to Jamaican lore and legend.

Ultimately, people are the heart of Goodison’s poems, conveying their individuality as inextricably tied to culture, place and politics. In Mother Muse, focus returns again and again to two “mothers” in Jamaican music: Sister Mary Ignatius “Sister Iggy” and dancer Anita “Margarita” Mahfood, who, even if limited by social norms or misogynistic abuse, inspired in others a love of music and creativity as fundamental to life and personal – and political – strength.

Alumnus of Alpha Boys School for the wayward, his mother
handed him over to Sister Mary Ignatius, nun more deserving

of a T.V. show than the high flying one of starched cornette;
she was a devotee of rhythm and blues, jazz, bebop

and all other worldly music. Athlete and able coach of cricket,
boxing, football, netball, and table tennis.

Goodison’s poems hold a similar strength of mind, mapped onto present day happenings and memories, deliberate and knowing on a range of topics. Whether writing about the personal or historical, she is able to blend the two without forced symbolism – meaning arises from the physicality of her imagery and careful, sometimes playful, sometimes reverential word choice.

Contest meant for near white weepdroppers to win.
White in their own eyes till they go to foreign,
and find out what a disqualifier their wee drop
of black blood is. It is then they come back.
Blacker than black: Blackness retroactive.

What can be learned about people and culture from Mother Muse is equal to what the book can inspire in social and creative acts. Goodison sheds light on how sharing stories helps us make sense of our world while illuminating the under-explored multitudes that shape it.

A critic on Fox writes her off, gives her thumbs down
for acting all arrogant; for not taking directions.
For her part, all she did was leave home, drive her car
and change lanes. Say her name. 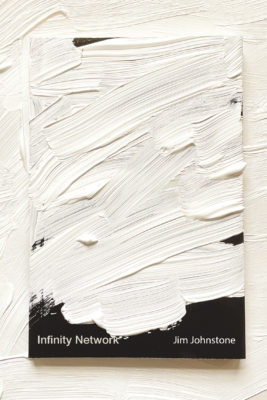 In the final book of a poetry trilogy, Jim Johnstone’s Infinity Network captures the overly connected world’s joys, pitfalls and promises as they relate to both personal identity and wider social concerns.

The mathematical symbols that name the book’s chapters move from zero to integral to infinity – that is, the book’s themes fittingly and auspiciously circle back on themselves, an ouroboros narrator with a body constructed of words. Bodies themselves ramble around an increasingly digital world in Johnstone’s poems, looking for meaningful mirrors or relationships and finding simulacra, constantly reminded of their fallible and contradictory ways.

together, if only just to laugh
off truth—meme, meaning,
identity—the ground floor
where we disguise, despite everything,
as wolves in wolves’ clothing.

Infinity Network appears to look inward at itself too, indirectly examining the observational and meaning-making place of poetry in an increasingly technological, multivalent culture. What is fleeting and what is meaningful converge in Johnstone’s skillful, dreamlike – or fantastically big-screen-like – imagery. Repeated and related words gain and lose meaning in the same poem; mirrors and books and bodies are broken.

The fleeting feeling
of an unanswered punch.

In Johnstone’s visceral, disorienting images is a clarity that all is not right with the world. Yet we still must exist in it one way or another – the question is where to place our attention and efforts, how to recognize each other and relate, even how to stay alive.

The wall defines our lack of sovereignty.
You
and I
and everyone else
who isn’t.
Isn’t permanent
or part
of the panoply. 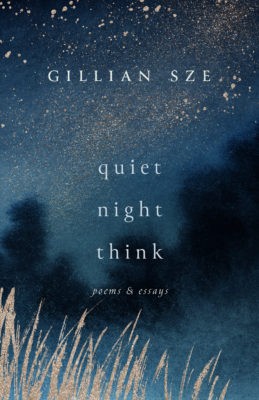 In Quiet Night Think’s personal essays, poems, and a long concluding poem, Gillian Sze lets us into the intimacies of her poetic mind as she expands on how her family’s heritage, the weight of cultural contexts, her identity as a mother, and the impetus behind her own creative acts.

The fern is another word
for memory.
Watch the clouds
as they knit their way
across the night.
What I want to tell you
is imperative—
that we are flawed
and exalted,
that there are those
who still look to the raven for rain.

The book’s titular essay sets the book’s stage and shows Sze’s innate curiosity and depth of thought, explaining that “Quiet Night Think” is the direct translation of the title of a famous eighth-century Chinese poem by Li Bai, which Sze remembers reading and translating as a child growing up in Winnipeg. It’s this short poem that inspired Sze to contemplate language and meaning throughout her life.

She writes, “What is this space that poetry offers? Creative space. Emotional space. Reflective space. A space for possibilities… Loss, as my mother already knew, is what provides the space from which meaning can emerge.”

As Sze’s understanding of the poem evolves past childhood, she uncovers its labyrinthine relationship to her own writing. Her reflections on family are coupled with her reflections on poetry, which both peer into transformational moments and the elements of growth.

A black squirrel leaps from the balcony
to the moss-fringed maple: bracket to branch.
Fog against cloud, the sky whispers to the birds arcing,
Where do you go when I look away?

The book’s other essays offer similar insight into poetry and language, accessed through generously told stories of Sze’s family and her experiences as a mother. The poetry of Quiet Night Think unsurprisingly echoes Li Bai’s poem without mimicking it: Sze draws on emotion-imbued imagery from nature, daily observations and intellectual investigations, punctuated by intimate, often heart-rending glimmers that captivate all the way to the book’s end. 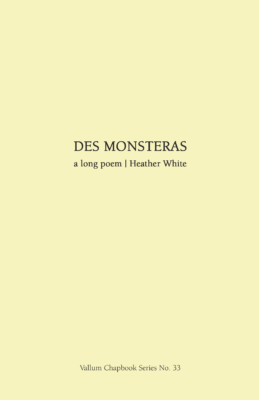 A chapbook on a journey beyond itself, Des Monsteras experiments with personal storytelling through poetry’s often obfuscated path to the truth. Here, White explores who she (or her book’s protagonist) is in relation to a new place, and to new people whose histories she is beginning to grasp.

The chapbook’s subtitle, “a long poem,” immediately plants the suggestion that the poems on each page relate beyond overarching themes and memoir traits. Des Monsteras delivers on that promise through an abstracted narrative, full of emotional edges and deliberate words that chime against each other within and across the pages.

I slept and woke up remembering
that demonstrate comes from the
same root as monster. Both are
about pointing out or warning,
showing, montrer.

Firmly set in the present day, with all its conspicuous pop culture and social media material, Des Monsteras digs into deeper personal concerns in pandemic times and the observations, songs, and half-remembered conversations that fill our days. White queries Taylor Swift lyrics as she listens (and sometimes cringes) while roaming through Montreal in winter, as if writing these poems while in motion, searching out a tune of her own to move by.

… Aren’t we
all just striving to return ourselves
finally to the world? In love you get
returned to it by someone, who
might begin by holding your face. mRb