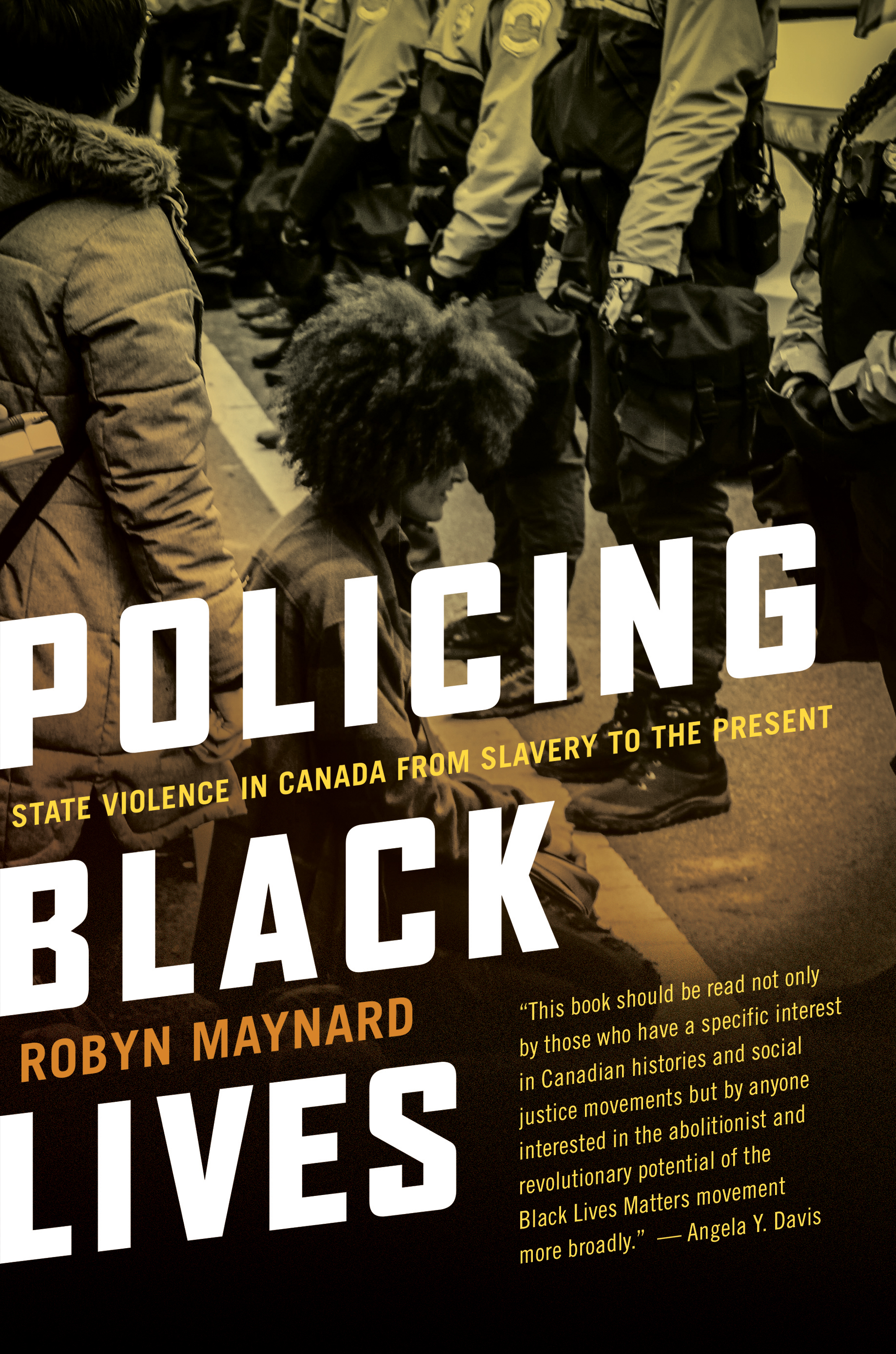 Trump’s presidency solidified the smug Canadian response to accounts of racism in the United States. “That doesn’t happen here!” we are told, in response to across-the-border police shootings of Black people, Muslim bans, catastrophic levels of Black incarceration, or presidential support for white supremacists. For Black Canadians, the erasure of our presence and the denial of anti-Black racism in Canada that follows that erasure illustrates what Anthony Morgan called the “suffocating” experience of being Black in Canada.

Robyn Maynard’s Policing Black Lives: State Violence in Canada from Slavery to the Present intervenes in the narrative of Canada as the Promised Land, a haven for escaped slaves. Reading it as a Black Canadian woman, the book is a brilliant and powerful validation of our lived experiences. Maynard characterizes her work as “bearing witness” to and “rendering visible” the reality that “what is happening to so many of our peoples is not individual or isolated, but part of a larger systemic and society-wide phenomenon that dates back to this country’s history of settler colonialism and slavery.” 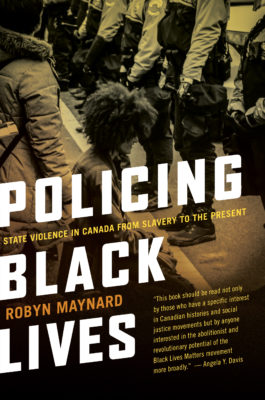 Like the Burnley “Rocky” Jones autobiography released last year, also from Fernwood Press, Policing Black Lives is required reading in the age of Black Lives Matter. And as with Jones’s book, I gained knowledge that I am not alone, and recognized the urgent need for broad community organizing against these injustices. The activism of Rocky Jones, of Black women like Sherona Hall, of the students at Sir George Williams, and the many collectives of Black women who organized against exploitation also speak through this book, reminding us that Black people in Canada have always recognized this injustice, and resisted. Reading it, I was by turns enraged and grateful – grateful for the clarity of a book that so plainly articulates and connects the experiences we have for so long been told “don’t exist here,” enraged at the disregard for our lives made stark in these pages.

Maynard, in an interview conducted by email, observes that “our invisibility has not provided any protection from State harm or state neglect.” She notes:

The Canadian government has a vested interest in appearing committed to “diversity,” benevolence, and generosity. Despite ongoing injustices within and across state institutions – criminal justice, immigration, child welfare, and public education in particular, Canada continues to laud itself as a beacon of human rights and diversity. In some ways, this renders it particularly challenging to push for systemic change. The rhetorical apologies, and the language of reconciliation and multiculturalism – in contrast to the doctrine of hate promoted by Donald Trump – in some ways serves to disguise the fact that the United States and Canada have a shared inheritance of white supremacy, not only in the past, but in the present.

Maynard traces this inheritance from the colonization of Canada, through the still-understudied period of Black enslavement to contemporary manifestations of state violence. She argues for the intersectional understanding of state violence beyond its most popularly understood manifestation in police shootings of Black men. “It was important to me,” she writes, “that my book engage in a serious way with the experiences of all Black folks – certainly looking at the profiling of young Black boys by police – but refusing to ignore the profiling that poor Black women faced at the hands of social service agencies (including surprise home visits and child apprehension, among others). Because so many of our stories are untold, I took seriously the responsibility to try to bring to light those that rarely make it into the public realm outside of a brief headline.” Importantly, Maynard also recognizes the violence faced by trans, gender non-conforming, disabled, and other people so often left out of these accounts.

The brilliance of Maynard’s book is based not only on her scholarship, but, crucially, on her work as an activist and community advocate.

For many white Canadians, Maynard’s detailed accounts of children seized, young students suspended, police assault and sexual humiliation of the bodies of Black women, and the immigration detention sentences with no release date may be shocking, dislodging “settled” ideas of the goodness, inclusiveness, and progressive nature of Canada. For these Canadians, Maynard’s book comes as a necessary disruption, demanding that these injustices be seen. The title, Policing Black Lives, consciously borrows the formulation of “Black Lives Matter” – when Black lives do not matter, the policing of and violence enacted upon our bodies will always take place.

The brilliance of Maynard’s book is based not only on her scholarship, but, crucially, on her work as an activist and community advocate. As Maynard explains, “I began writing, really, as one way to ease the frustration, anger, and helplessness that I felt witnessing the state’s brutal disregard for the lives of many people that I cared for.” The genesis of the book lies in her work in harm reduction and support with people living close to the street, where she spent “a significant portion of [her] time over these years … bearing witness to state violence and state neglect. … It also meant, sometimes, seeing people die tragically from preventable health conditions caused and exacerbated by the intersections of poverty, ableism, and racism. Really, it has entailed watching beautiful people having their lives endangered, maimed or destroyed by the institutions tasked with protecting them.” This “on the ground” work is also present in the writing itself, which resonates with urgency, outrage, and compassion for those discarded, damaged, and killed.

Maynard’s project of “making visible” in her writing is grounded in deeper ideas of transformative justice in communities. As she observes,

Racism in Canada has long perpetuated itself by allowing symbolic – and often tokenistic – gestures toward racially marginalized communities to stand in for a commitment to remedy ongoing injustice. Viola Desmond being on a $10 bill does not mean that any level of government has challenged the unique vulnerabilities at the intersections of race, class, and gender that render Black women amongst the poorest populations in Canada. It doesn’t impact the realities faced by Black women in prison for poverty crimes, for example, and it doesn’t help in situations like that of Majiza Phillip – a Black Montrealer – who had her arm broken by the Montreal police. Similarly, in the United States, the fact that Martin Luther King Jr.’s likeness is found on stamps has not saved the lives of Trayvon Martin or Sandra Bland.

She draws a comparison with the problem of “recognition” for Indigenous Canadians, observing that “with Justin Trudeau in power, even amidst recognition of past injustices, and words that state a commitment toward remedying past and present harms caused, for example, by colonialism, it’s clear that visibility and acknowledgement of injustices are often used to disguise ongoing relationships of racial domination.”

Like the work of Afua Cooper, Charmaine Nelson, Simone Browne, and George Elliott Clarke, Maynard’s is a perspective-shifting book, one that also rebukes the whiteness of Canadian writing, journalism, and scholarship (exemplified by major writers and editors’ support of the “cultural appropriation” prize). That Maynard’s material has been under-researched before her illustrates the need for Black voices in Canada’s literary and academic institutions. Writing this review as, in my own life, I supported a young Black woman whose child was taken from her breast less than twenty-four hours after giving birth, as I texted a lawyer to try to coordinate an absence for a young Black man incarcerated while awaiting trial to attend the funeral of his cousin shot dead in a historical African Nova Scotian community, as I visited a Black man hospitalized due to a breakdown caused by the stress of awaiting trial and the impossible conditions of house arrest – the truth of Maynard’s witness is obvious. That it has not been said in such a way before, and that these experiences are so rarely rendered, speaks to why this book is urgently needed. mRb

El Jones is a poet, community activist, and educator living in African Nova Scotia. She was the fifth Poet Laureate of Halifax and is the current Nancy’s Chair of Women’s Studies at Mount Saint Vincent University. She is a co- founder of Black Power Hour, a collaborative radio show, community organization and education collective founded with prisoners.