A review of Polynya by Mélanie Vincelette

With the continuing popularity of Scandinavian noir, it was only a matter of time before someone tried their hand at outright Arctic noir. With her second novel Polynya, Montreal author Mélanie Vincelette gamely steps up to the plate with a murder mystery – of sorts – set in Nunavut. Published in French in 2011, this Governor General’s Award nominee is only now appearing in English.

Ambroise, a cook at a gold mine on Baffin Island, is crushed when his brother, Rosaire, is found dead in an Iqaluit hotel room. There’s only one suspect – Rosaire’s on-again, off-again girlfriend, local star stripper Lumi – and a mysterious phrase is found written on his arm: “The Chinese discovered America.”

Ambroise suspects that the local police are taking the easy way out by accusing Lumi and Vincelette teases out the connections between a host of colourful characters as Ambroise struggles to find out more about the murder: Lumi’s rival stripper Marie-Perle; Marcelline, a researcher and Ambroise’s unrequited love interest; Inuit pilot Tommy (also a rival for Marcelline’s affections); the mine’s owner, flamboyant French aristocrat Brixe de Saxe Marjolique (who, like Charlie Brown, is inexplicably yet humorously almost always referred to by his full name), and others. The characters are drawn in broad strokes, but as Ambroise declares: “In the North, people are always larger than life.” 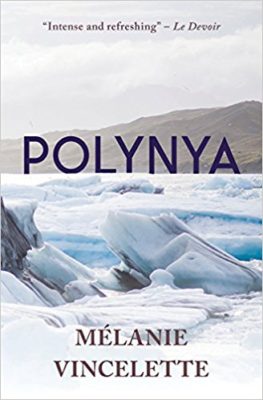 I say that the novel is a murder mystery “of sorts” because it’s more than that – and yet less. There’s a mystery, but the tightly woven plots and breath-catching thrills of the typical crime thriller are not to be found here. The story is constructed around a murder, but loosely. The structure is a skeletal one, onto which Vincelette hangs her poetic turns of phrase, abstract metaphors, and arresting Arctic imagery.

At times the prose is awkward or halting. I might have suspected a dicey translation, but with the local super-team of Sheila Fischman and Donald Winkler (both multiple award winners for their translations of Quebec novels to English), I have to assume that every choice is a deliberate one to reflect the style of the original. The self-deprecating Ambroise often talks about being hesitant, feeling inarticulate, or lacking insight, so perhaps the occasional peculiar phrasing is meant to reflect his inner state.

The plot contains a lot of threads that Vincelette leaves hanging, including a fairly spectacular scene near the book’s halfway point in which Ambroise gets word that a man jumped out of an aircraft in flight, with a hostage in tow. But having set up this intriguing action piece, Vincelette never returns to it; presumably it’s one of several red herrings to keep the reader guessing.

In a way, the book is as much a romance as it is a mystery, with a lot of time spent on Ambroise’s melancholy longing both for his lost brother and for Marcelline. Pining in jealous self-pity, Ambroise imagines murdering Tommy over their romantic rivalry: “As a final despairing gesture I’d write her a farewell letter in mustard on the wall of my prison cell.” The mustard is a nice touch, and key to Vincelette’s style: cutting through the melodrama with a touch of absurdity, the kind of dark, understated humour you might miss at first glance.

“To survive in the Arctic you have to tell great stories,” Ambroise states. “Our only capital is our legends, skillfully contrived.” And Vincelette spins some great yarns here. The way they’re woven together is more poetic than narrative per se, and throughout, her vivid phrases evoke how history, global politics, geography, and especially weather dominate the collective psyche of the far north.