Of Ruins, Bombs, and Dinner Parties

The ruins of the ancient Assyrian city of Nimrud rest in Northern Iraq, some thirty kilometres outside the city of Mosul, where they were preserved as a heritage site for more than three thousand years. Readers find themselves there in the opening of Poppies of Iraq, a touching autobiography by Brigitte Findakly with drawings by her husband and collaborator, Lewis Trondheim.

As a child in the 1960s in her hometown of Mosul, Findakly picnicked with her Iraqi father and French mother in Nimrud and the nearby Hatra, picking poppies but leaving the stones behind. The Iraqi government was so serious about preserving the area that soldiers searched cars leaving the site for stones and artifacts. The ruins survived numerous wars and the harsh elements of the local climate until recently, when the forces of ISIL destroyed the monuments with explosives and heavy machinery. The book sets the tone right away: a tender memory of a peaceful and happy childhood is juxtaposed with the brutality of a complicated and troubled history. How can one make sense of a private life so disturbed by its violent and irrational surroundings? Well, maybe one can’t. Maybe all one can do is tell fragmented stories from imperfect memories that together will build the emotional landscape of a lifetime. That is what Findakly does, covering her early years in her homeland and the challenges of the family’s migration to France until today, in her parents’ old age. 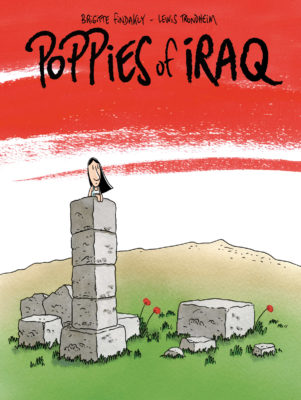 The medium of a graphic novel, as it turns out, is ideal for this endeavour. Poppies of Iraq is a series of tableaux with no linear chronology, a collection of events that cascade, incomplete and suspended, in a rapid and fluid succession. We see Findakly’s school life and Saddam Hussein’s Ba’ath Party rising to power amid dinner parties, censorship, her military dentist father’s work, her older brother’s political awakening, her first communion as a Christian minority, the ancient history of her family, her adolescent love of pop music and magazines, and the diaspora of her extended family to the four corners of the world. But it is only now, as a middle-aged Parisian, that the author delves into deciphering her own childhood. She asks her brother, mother, and cousins what was really happening then. Were the Christians being persecuted? The interplay of faint memory and historical fact does not bring about any easy conclusions.

Findakly confessed it was the invasion of Mosul by ISIL that prompted her to revisit her family life. The delicate and minimalist illustrations ground the narrative, forming a unifying panorama and exquisitely adding to the narrative while subtly inserting humour into even the most tragic episodes. The use of old photographs helps to erase any impression of excessive preciousness in the masterfully composed snapshots of life interspersed with coups d’état, political instability, and personal upheaval.

When life in Iraq proved to be unsustainable, the Findaklys moved to Paris, where they faced bureaucratic, social, financial, and cultural hardships. Life there for Findakly’s parents would never be satisfactory: her mother missed her beloved Iraq, and her father would never practise dentistry again. The original plan to go back “when things get better” never materialized, with the conflicts in the country only escalating. Findakly’s occasional visits to Iraq are marked by alienation typical of the returning émigré who does not recognize her own country, and she loathes her cousins’ Islamophobia.

Poppies of Iraq is the latest in a series of wonderful non-fiction graphic novels about life in the Arab world and subsequent exile in Europe, which includes the already classic Persepolis, by Marjane Satrapi, and The Arab of the Future, by Riad Sattouf. These memoirs are necessary narratives for a better understanding of the contemporary Arab experience, and the present book is a beautiful addition to this literary collection. mRb