A review of Possess the Air by Tarss Grescoe

The true heroes of history don’t always announce themselves. Sometimes they have to be found. Consider Lauro de Bosis. You might not know him now, but by the time you’ve finished Taras Grescoe’s new book he may well be in your personal pantheon.

Grescoe began his career more than twenty years ago by bringing a newcomer’s perspective to Quebec’s social mores in the award-winning Sacré Blues. Since then, he has gradually refined his non-fiction modus operandi, moving from contemporary works where content dictates form to accounts of history that increasingly employ the devices of traditional fiction. The strategy now reaches a peak with his kaleidoscopic story of life and resistance in Fascist Italy, and it’s aided immeasurably by the presence of a real-life protagonist who might have stepped straight out of an early Ernest Hemingway novel.

Possess the Air is a massive project, combining research that’s deep yet deployed with a light touch, the smooth stage-managing of dozens of historical figures of varying fame and notoriety, a blend of the macro (sweeping social changes) and micro (love stories, individual crises of conscience). Yet Grescoe makes it look easy. It’s quite a feat.
The relative obscurity of de Bosis, a son of Italy’s upper classes who risked everything in an attempt to symbolically undermine Benito Mussolini at the height of Il Duce’s power, works to Grescoe’s advantage. Unless you’re an adept of twentieth-century Italian history, you can read Possess the Air as you would a thriller, in page-turning suspense as to how the quixotic project at the heart of the book – an act of selfless aerial idealism foreshadowed in the first pages – will turn out. 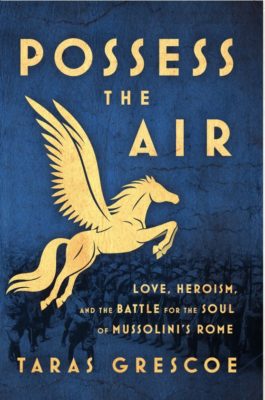 Possess the Air
Love, Heroism, and the Battle for the Soul of Mussolini’s Rome
Tarss Grescoe

Grescoe paints a sobering picture of how totalitarianism can take hold by degrees. Mussolini and his blackshirts appealed to nationalistic instincts at a time of instability, and they didn’t mind resorting to plain thuggery. The book is strong on the feel and everyday dilemmas of life under such conditions, underlining how one’s willingness to go along with oppression can amount to complicity. He also has the born historian’s knack for finding illuminating details in unexpected places: in present-day Rome, an equestrian statue of the anti-clerical general and nationalist Giuseppe Garibaldi is pointedly positioned so that his horse’s rear end faces the Vatican.
Nationalism, fear-mongering, xenophobia… parallels with certain present-day trends hover over Possess the Air. But Grescoe, to his credit, doesn’t belabour the point. Instead, he’s content to offer clear-headed reportage, like philosopher Gaetano Salvemini’s view of fascism as “a malady of sick or failed democracies, whose people consented to abandoning hard-won liberties in return for the promise of national unity, purity and strength” – and effectively say make of it what you will.

Literary figures abound among the individuals through whose experiences Grescoe structures the book, and their legacies are decidedly mixed. Ezra Pound does not emerge with much dignity; Thornton Wilder and Sinclair Lewis do. A young Hemingway saw through Mussolini from the start and comes out looking like a whistle-blowing prophet, albeit one whose message was ignored when it could have made the most difference. As for George Bernard Shaw, let’s just say you may never think of Pygmalion in the same way again.

At times, as with many a well-wrought view of history, Possess the Air can’t help but inspire reflections on the fleeting nature of fame. English actress Ruth Draper, paramour of de Bosis and party to his clandestine rebellion, was arguably the most celebrated stage figure of her age, yet she is practically unknown now: her profile never having carried over to the silver screen, her greatness effectively passed with the memories of those who saw her perform. A similar fate appeared to have befallen de Bosis. But Taras Grescoe has performed an act of resurrection, and done it with flair.mRb