Putin It in Context

A review of Putin Kitsch in America by Alison Rowley

It’s 2020, and you can find everything you need – and tons of stuff you don’t – on the internet. For Alison Rowley, professor of Russian history at Concordia University, the stuff she’s after features images of a shirtless Vladimir Putin riding a bear, catching a tan, or wading hip-deep into a freezing Siberian river.

Putin Kitsch in America is an academic text that looks at the proliferation of political kitsch in the digital age. It’s a simple premise, but Rowley explores a staggering amount of the stuff to take us on a tour of the historical, political, and psychology behind the pieces she finds.

As she explains in the intro, “the form that kitsch takes is always distinctly tied to the era in which it is made,” and our political era is not only digital but also participatory. Over the last decade, we’ve become extremely comfortable taking part in political culture, be it sharing Obama’s “Yes We Can” speech or creating Vladimir memes (Sadputin, Madputin, Radputin) – hollow gestures that make us feel politically involved while demanding no real political action. 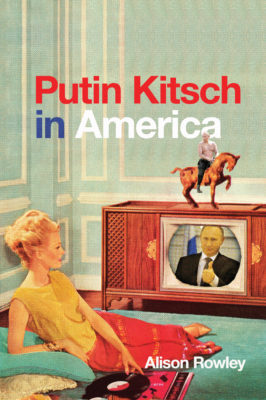 What, other than his name, has made Putin such a (kitsch) star? Rowley expertly outlines Russia’s history and the rise of the President from KGB nobody to Boris Yeltsin’s annotated successor to give context. Putin’s grip on Russia was perhaps inevitable, but his appeal in the rest of the world can perhaps be linked to our participatory culture.

Unlike Trump or Obama, he exists outside of participatory culture, and his image harkens back to an age when politicians were less like celebrities and more like strongmen. Or “an action-hero celebrity-style president,” as Rowley calls him. It’s this image of Putin as a powerful man that makes him the dominant player in every single piece of kitsch in this book. (Weirdly, Hillary Clinton comes in second.)

Rowley’s prose is clear, succinct, and often captivating, but this is an academic text, which at times felt incongruous with its subject matter. More than once I found myself wishing for a snappier form and tone. The material is outrageous, and Rowley surely has the chops (and pop culture references) to pull it off.

Rowley explores the many memes of Putin, the best and most popular being “Putin on the Ritz” which, you guessed it, shows Putin with a mainstay of the American pantry – Ritz crackers. To Rowley’s dismay, however, unlike the slash fiction, she found little evidence that these memes were politically motivated. Sometimes a good meme is just a good meme.

The majority of the kitsch Rowley cites is created through print-on-demand platforms. While this service democratizes publishing and manufacturing, it also means that anyone can make anything. Putin Kitsch in America is about the participatory nature of political kitsch, but it also shows how that participation can dismantle the political institutions it’s mocking. mRb

Sacha Jackson is a Montreal-based writer, editor, and reader.