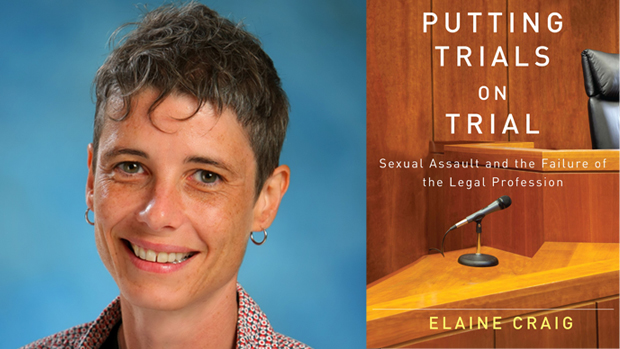 More than a Trial: The Canadian Justice System and Sexual Assault

I once charged someone with sexual assault: a man grabbed my breasts and then raised his fist to punch me as my friends pulled him away. I was nineteen and it was at a university party. The cops were called, and one of the things that sticks out in my memories of that evening is a police officer saying to me, “This happens so often, but so few women lay charges; please do this.” My experience encapsulates two facts underlined in Elaine Craig’s thorough Putting Trials on Trial: Sexual Assault and the Failure of the Legal Profession: those who experience sexual assault are overwhelmingly female, and only a small fraction of women end up taking the accused assailant to court. I did, and it was not a positive experience.

Reading Craig’s book, it appears that I am not alone. The legal system in Canada is stacked against justice for sexual assault survivors in a range of ways. But this book, though quite scathing, is also constructive. It develops an argument for reform of the present ways sexual assault is treated. Trials seem to be beset by a range of different rules, regulations, and traditions: the public, whether complainant or accused, requires counsel to navigate the process. But Craig demystifies this process and, in doing so, is able to win over the reader as a supporter of what becomes an obvious, essential, and very possible reform that would help create a far more fair and just situation for all parties in the courtroom and society at large.

Though it is written as instructions for those working within the system, it is by no means limited to that audience. Putting Trials on Trial provides a readable, though oftentimes disturbing, look at the Canadian criminal justice system’s problematic treatment of sexual assault. For a society rife with criminal procedural television shows and films dealing with these types of crimes, this insider exposé makes for gripping material. Beginning with a description of the context and commentary surrounding sexual assault trials, Craig immediately discusses what is commonly referred to as the “twin myths” about rape, which are reflected in the so-called “rape shield” section of the Canadian Criminal Code. These myths are quite clear: first, that “women who are sexually active are less trustworthy,” and second, that “women with sexual experience are more likely to have consented to the sex at issue in the allegation.” 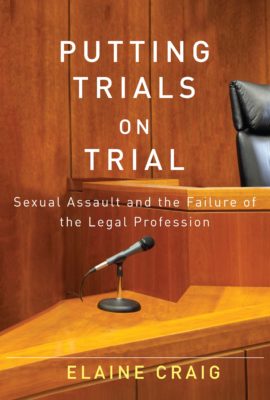 Craig goes on to demonstrate and provide shocking examples of how the defence, the Crown, and the judiciary are all responsible for reinforcing these beliefs, as well as creating and maintaining a trial environment that seems to leave little room for fairness to come into play. Invoking the two myths to question complainants’ credibility is an unfortunate pattern that disrupts the nature of the trial – the actual purpose of finding out the truth of what happened. It actually veils the truth.

Craig agrees that the defence must be an advocate for the accused, but maintains that they should not resort to being unethical in order to be a strong advocate. She describes how cross-examination in preliminary trials can be used in the interest of preventing the complainant from continuing with the process, and enumerates a number of occurrences where defence lawyers advertise their abilities to silence complainants on firm websites. Craig acknowledges the occurrence of so-called whacking of the complainant, defined as aggressive questioning meant to disturb and distress; Marie Heinen’s discussion of this style of lawyering was brought to light by the media at the time of the Ghomeshi trial. Craig takes great pains to suggest that though Heinen was seen as encouraging the use of “whacking” in a video circulated online, this is not necessarily borne out in Heinen’s courtroom style. Whacking is also not very effective in terms of accessing the truth and can thus limit the ability to uncover legitimate information on both sides.

Craig is not calling for an all-out destruction of the system; rather, her very commitment to it means that she focuses on the rights of all parties. The accused has no right to a “discriminatory defence,” she writes, and calls for “clear ethical obligations on defence counsel.” But the failure of the Crown is taken as seriously as the problems of the defence. Recognizing that the role of the Crown is to seek a fair trial over everything else – according to the Model Code of Professional Conduct from the Federation of Law Societies of Canada – there is a responsibility that lies on their side as well.

I felt like I was reading about myself when Craig talked about how so many complainants have a lack of familiarity with the rituals of the court system and do not realize that the Crown is not their lawyer. The complainant is a witness for the Crown, and therefore needs to have some level of preparation. Craig underlines a need for specialized education to avoid the risk of coaching a witness, what she calls a “trauma-informed approach,” and resources that would provide independent legal advice for complainants. Judges, according to Craig, also need to “humanize the courtroom setting.” The physical set-up of the court can impact the ability to achieve a fair trial. The idea that complainants must stand without break seems extreme. Even the imagery of the court – how it underlines the white, Western, male, colonial history of the judiciary rather than the reality of the diversity of Canada and First Nations experience – will have an impact on complainants who do not reflect that history.

Facing this, Craig calls for what reads like basic civility. “Compassion and intervention” are her terms: she wants judges to protect the process as well as the complainant and make sure that this civility is not biasing the trial. Of course, “trial judges must balance the duty to intervene with the need to ensure that the accused’s right to a thorough cross-examination is not unduly compromised.” But this means stopping irrelevant, badgering questions, and understanding that inconsistencies do happen, especially when one is thinking through trauma – this reflects a trauma-informed approach.

Judges also need to be informed of the law. The understanding of consent, which is presently much discussed in the media, is very clear under Canadian law. Consent must be contemporaneous. It cannot be implied. That cannot be a defence. Section 273.2 (b) of the Criminal Code makes it plain that “an accused can only rely on an honest but mistaken belief in consent if he took reasonable steps under the circumstances to ascertain whether the complainant was, in fact, consenting.” Some of the situations mentioned by Craig go far beyond the idea of error and are simply based on misunderstanding or lack of knowledge of the law, or a reliance on basic stereotypes about women, sex, and consent. Leaving what is perhaps the most shocking fact until last, Craig describes how the majority of judges appointed to try criminal matters have very little (and sometimes no) criminal law experience. Thus training and assessment are also necessary. Educational programs need to be transparent and data must be available to demonstrate that judges are indeed being trained and assessed.

For us, as readers, the overview provided by Craig can help in gaining an understanding of how and why sexual assault is such a fraught crime from a legal perspective. In her final chapter, she explains that her goal is to provide “measures that could be taken by the legal profession to make sexual assault trials less stressful, less traumatizing, and less inhumane.” None of these suggestions require transforming the legal profession or restricting the rights of the accused. Revealing that the majority of lawyers interviewed for the project were well aware of the trauma of sexual assault cases and “would have serious reservations about recommending that a loved one endure this process,” Craig’s book behooves the legal profession as a whole to think seriously about these recommendations. mRb