A review of Rain Falls Like Mercy by Jack Todd 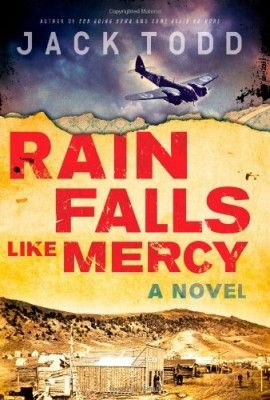 Near the beginning of Rain Falls Like Mercy, a Wyoming ranch owner tells a reporter what’s what: “You want to write about the West, you have to know the truth about this country. The truth is in the tall tales. Take away the yarns that stretch the truth, and all you have left is the East with better scenery.”

For many years, Jack Todd stuck to the facts. As a sports writer for the Gazette, he analysed hockey stats and commented on the performance of quarterbacks. But in 2002, he began a novel based on family documents he’d received from his mother decades before. Sun Going Down, which focused on a cowboy-turned-military-man relative of Todd’s, was the beginning of the Paint Trilogy that spans exactly a century of family history.

Rain Falls Like Mercy is the last volume of that trilogy. And while it is based on true stories, it reads like a series of tall tales. In this book, Todd has combined three genres of truth-stretching: it is at once a Western, a thriller, and a story of military heroism. You name it, Todd’s got it: cowboys, psychopaths, soldiers, prostitutes, prison-wardens, oil tycoons, desperadoes. The choice to pay tribute to these traditions accounts for both the novel’s triumphs and flaws.

The story opens with a grisly slaying of a runaway teenage girl. Her body is found in a cabin on a Wyoming ranch, and we follow Sheriff Tom Call as he investigates with the help of the ranch owner Eli Paint and his wife Juanita. This crime – one in a series of murder-rapes that are described in disturbing detail – is the start of a love affair between Juanita and Tom, but the relationship is interrupted by Tom’s enlisting as a pilot in the Second World War. The case is also left hanging, and it haunts Tom no matter where the war takes him.

Throughout, the third-person narrative shifts from one perspective to another, allowing us to slip into the murderer’s shoes, those of one of his victims, and then those of a Navy gunner, all in rapid succession. Best of all, Todd allows us to hear the idiosyncrasies of his characters’ language, which can be wonderfully over-the-top. For example, the countryside is “drier than a preacher’s breakfast,” and a crossroads “looks like hell after the fire went out.”

But some elements are a bit too much: “The longest life is no more than a sliver of light between two boundless ribbons of dark, like the light you see through the chinks of a log cabin at sunrise.” Or the scene in which an American Indian intones a traditional funeral cry after everyone else has left the site of a death.

In the end, though, these things don’t spoil the fun of Rain Falls Like Mercy. This novel is a romp, and part of its charm is its flamboyant, not-quite-realistic colour. It feels right that some of the cowboys sound a little too much like cowboys.

And sometimes the writing is great. When the murderer is picked up as a hitchhiker, Todd perfectly builds the tension of the scene. We know how it will end, but, as with a Greek tragedy, we are riveted. We don’t want to see how the action will unfold, but are unable to turn away.

Todd is a master at creating suspense on a larger scale as well. The end of each chapter makes you want to plunge into the next. In this way, Todd has undoubtedly succeeded in Rain Falls Like Mercy. He brings us back to the childhood pleasures of being taken in by a good yarn. mRb