A review of Reading the 21st Century by Stan Persky 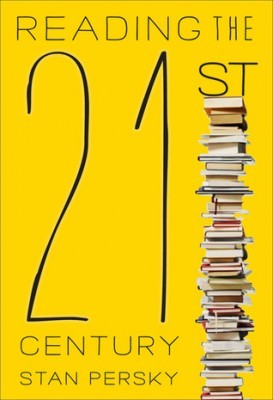 For Socrates, writing ideas down induced intellectual laziness. Not only does the skill of writing “introduce forgetfulness into the soul of those who learn it;” it also cheap- ens one’s education because the student thinks that the text can replace the living, breathing teachers who modify their discourse according to each pupil’s needs.

Whether or not you agree with Socrates about the dangers of the written word, his warning is remarkably relevant to the digital age. Constant Internet access has, for many, displaced an indispensable part of our thinking. As soon as a fact is in dispute, out comes the smartphone, and – ta-dah! Yet we remember nothing. Even worse, our interest in intellectual questions seems to have flagged.

This problem is at the centre of Stan Persky’s Reading the 21st Century. Persky has analyzed the statistics showing a decline in reading, writing, and general knowledge in today’s students. He has also tried to teach works of Spanish literature to a group of undergraduates, only to find that they hadn’t heard of the Spanish Civil War. Or Albert Camus. Or Augusto Pinochet. “How do you discuss a novel about the nature of historical memory with people who have no historical memory?” he writes.

Persky calls this a contemporary “cultural and political crisis,” and his new book of criticism attempts to look at how books published between 2000 and 2009 deal with it. He is interested in how the books of great writers, from novelists like Philip Roth and Javier Cercas to cultural commentators like Tony Judt and Richard Dawkins, address the loss of much of their younger audience to electronic “infotainment.”

It’s an important question, but Reading the 21st Century doesn’t answer it. Persky simply reviews every book he mentions, quoting liberally, often without connecting the authors’ ideas to his central theme.

Persky is obviously a talented book reviewer, and he writes very engagingly about the books he loves, but part of the problem is that he doesn’t get down and dirty with the prose he’s writing about. For example, of the unconventional writing techniques in Elizabeth Costello, Persky writes: “I suppose postmodern critics would describe all this as ‘destabilizing the text,’ but whatever it is Coetzee is doing in this virtuoso performance, it’s surprisingly compelling.” Even if you dislike postmodern criticism, you’re bound to find an explanation of “destabilizing the text” more fulfilling than no explanation whatsoever.

Yet when he is writing about books that directly relate to this cultural crisis, he is at the top of his game. Mark Bauerlein’s book The Dumbest Generation provides evidence for the up-and-coming generation’s lack in education, and Persky does a fine job not only of presenting this information but also of convincing us that Bauerlein isn’t an alarmist. And he is right to take issue with auerlein’s attribution of the problem to the revo- lutionary ideals of the 1960s.

Even when he ventures off topic, Persky writes about some amazing ideas and wonderful plots. We learn about Edward Said’s interest in the kind of artist whose end-of-life style reflects unresolved problems rather than comfort in one’s own oeuvre. We lose ourselves in the snowflake-like structure of Orhan Pamuk’s Snow, a novel about a poet investigating a series of suicides related to the prohibition of wearing headscarves.

Despite its flaws, as an introduction to great works of literature of the past decade, Reading the 21st Century works. When Persky praises the essays of historian Tony Judt as “persuasive invitations to the life of the mind,” he is describing his own book’s achievement. This volume will likely inspire you to read and think about literature, and there can never be too many books that do that. mRb