A review of Readopolis by Bertrand Laverdure

No one ever suggested the literary life was easy. Whether you’re a writer, editor, small-press publisher, or planner of literary events, the hours are long, and if there is any pay, it’s often meagre. But we don’t do it for the money. At least most of us don’t. So what’s driving the purveyors of literary culture if not material gain? Bertrand Laverdure anatomizes this question in his chaotic, ever-morphing novel Readopolis. 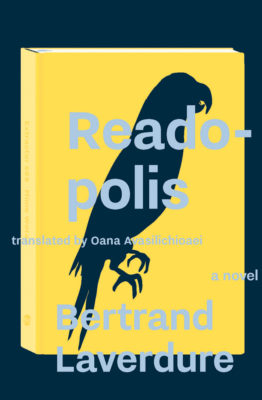 As a reader on the editorial board for an unnamed publisher, Ghislain, the novel’s central character, sees himself on the front lines of a war for the very existence of Quebec literature. He takes an antagonistic attitude towards aspiring authors, seeing them as “smooth talkers” with “detestable pipe dreams.” For Ghislain, reading is more than an occupation; it’s a vocation and a spiritual calling. He props up his identity as a reader with self-constructed ideologies that include his analysis of types of readers and their temperaments (autodidacts, practicalists, and impressionists), as well as his theory of the reading phase, a mental state that transports the reader to the world of readopolis. Ghislain describes readopolis as “a complex state of concentration that enables us, by decoding a series of written or printed letters, to reproduce at will the sense of being detached from the world, the impression of doing precision work on a fragile object placed before us.” His obsessive reading habits are not limited to the page. Railway plaques, discarded student essays, pamphlets handed out in the metro – anything adorned with the written word becomes a target for his analytical eye as he wanders the city. Like most people engaged in literary work, Ghislain has another job to make ends meet, at the Couche-Tard next to the Joliette metro station.
With Readopolis, Laverdure has created a beautiful, humorous jumble of a book.

The novel is overflowing with ideas, forming a collage of mutating literary mediums: aphorism, e-mail, letter, screenplay, stage play, and straight-forward narrative, including a stand-alone dystopian sci-fi novella that envisions a world where writers can assassinate their critics. References to theorists, artists, writers (many Québécois), and filmmakers – far too many to list – sprout like rainforest mushrooms throughout the text. Musings on history, economics, ethics, ontology, social commentary, art, film, pop culture, architecture, and literature form the bounds of Readopolis, until the barrier between Ghislain’s reality and readopolis itself becomes blurred. His friends respond to his increasingly neurotic world view with a mixture of amusement, concern, and disdain. And it must be said that the constant intellectualizing of absolutely everything can become tedious, which is the point. Ghislain’s mind is an exhausting place to be. Maintaining the towering edifice of readopolis, which requires tremendous effort, is ultimately delusional in a society that does not see the value of his obsession. As Ghislain laments: “We are all mirrors. We understand so little of what surrounds us that we start to conceive, invent games to soothe the spirit.”

With Readopolis, Laverdure has created a beautiful, humorous jumble of a book. As fantastical as it is, it’s very much a novel of place, immersed in the sights, sounds, and flavours of both Montreal and Chicago. Oana Avasilichioaei’s translation is impeccable, retaining a distinctly Québécois essence. And though Ghislain’s world view may ultimately fail at transcending the reality surrounding him, it is necessary. As cult filmmaker Alejandro Jodorowsky proclaims regarding the ultimate failure of his film in the documentary Jodorowsky’s Dune: “Dune is in the world like a dream, but dreams change the world also.” I think most champions of literature would agree that this same near-mystical outlook is necessary for both their sense of optimism, and their very sanity. mRb