A review of Rebel Musics, Volume 2 by Edited by Daniel Fischlin and Ajay Heble

University of Guelph professors Daniel Fischlin and Ajay Heble edited the first volume of Rebel Musics, a collection of essays on protest music released in 2003. With the book’s twentieth anniversary approaching, they considered a reprint with a few new essays – but with Black Lives Matter, Idle No More, Extinction Rebellion, and other social movements gaining force, they found themselves with so much contemporary material that a whole second volume of original material made more sense.

In between an introduction by Fischlin and a conclusion by Heble, seven essayists write on a diverse array of intersections between music and politics. Feryn Wade-Lang contemplates the connection between ambient music and queer identity in “Music for Loneliness: Ambient Sound and Improvising Queer Resilience.” In “Rebellion Musics: The Reel Multicultural Jazz Archive Way Out West,” Josslyn Luckett chronicles the radical Black filmmaking collectives who documented music-making in 1970s California. Leila Qashu’s “Singing For Justice: Oromo Women’s Musical Responses to Violence,” possibly the collection’s most fascinating piece, documents the musical traditions of the Oromo minority group in Ethiopia, including a ritual where a man who has assaulted or insulted a woman is pursued by a large band of women who rhythmically chant at him until he apologizes and sacrifices a cow, which is then distributed among the women (a much better solution than either carceral punishment or cancel culture, in my opinion). 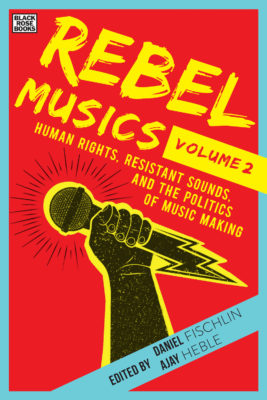 George Lipsitz’s “‘Welcome to the Dance’: FandangObon as a Polycultural Anti-Racist Remix” tells the inspiring story of the fusion between Mexican and Japanese musical ceremonies in Los Angeles. In “‘I Sing of Difference’: Violeta Parra’s Testimonial Songs for Justice,” Martha Nandorfy writes in detail about the career of Parra (1917– 1967), a Chilean folk singer who spent time among the Indigenous Mapuche people (who were part of her own heritage) at a time when Indigenous struggles were not at all on the radar of the country’s nationalistic left. Alyssa Woods and Robert Michael Edwards’ “A Hand on the Mic and a Fist in the Air: Sampling the Civil Rights Era in Holy Hip-Hop” focuses on the renewal of the activist tradition in recent rap. Finally, with “Enchantment’s Irreconcilable Connection: Listening to Anger, Being Idle No More,” Dylan Robinson offers a thoughtful and profound reflection on the complexities unearthed when an Idle No More drum circle occupied a Victoria, BC, mall during the Christmas shopping season.

In general, the essays have great value as research, as historical documentation of subjects that might otherwise have remained obscure, and as snapshots of moments in activist history. Because of the academic context, there’s a paradoxical irony in their language, mirroring a vexing issue in progressive discourse writ large. The topics, for the most part, could be of great interest or relevance to a wider public, but the academic language is often highly esoteric, not to say occasionally impenetrable, erecting a serious barrier to these texts being understood beyond an already specialized readership.

Some of the essays take a truly radical perspective on traditional frameworks for understanding music itself. Robinson cites musicologist Suzanne Cusick’s critique of music theory as “the dismemberment of music’s body into the categories ‘form,’ ‘melody,’ ‘rhythm,’ [and] ‘harmony.’” Nandorfy quotes Parras declaring, in a sort of proto-punk/noise manifesto: “[…] destroy meter, free yourself, shout instead of singing, blow into the guitar and strum the horn. Song is a bird without a flight plan that will never fly in a straight line. It hates mathematics and loves whirlwinds.” These provocative ideas challenge the very fundamentals we have for studying and making sense of music.

Ultimately, for those who love to discover more about music, if you can make your way through the occasional thicket of academic discourse, the latest iteration of Rebel Musics is an invaluable text in which you’re guaranteed to learn something – or several things – you never knew before.mRb