A review of Recognition and Revelation by Margaret Laurence, edited by Nora Foster Stovel

In a social media era, it is relatively easy for authors to feel proximate, even intimate, to their readers. Tweets and other updates create the opportunity to hear about a writer’s morning coffee, their bus ride, their response to the daily news. In the foreword to Recognition and Revelation, a collection of fifty-one pieces of short, non-fiction writing by Margaret Laurence, spanning from 1966 to 1993, David Laurence muses about how his mother might have responded “had she lived long enough to encounter the Twitterverse.” We’ll never know what Laurence might or might not have chosen to share, and it’s worth noting that, in several essays, she deplores the expectation of writers engaging in publicity and media. Nonetheless, the achievement of this collection is that it leaves a reader with a clearer and deeper sense of who she was as a writer, thinker, and individual.

In her introduction, editor Nora Foster Stovel provides context for the importance of reading essays written by writers better known as authors of fiction, especially female authors. In her non-fiction, Stovel argues, Laurence could adopt a more explicitly didactic and polemical tone toward the social and political topics that were of particular concern for her. Stovel’s introduction is rich and detailed, and paired with thoughtful and meticulous scholarly apparatus throughout the collection, making the book valuable for researchers as well as more casual readers.

The collection is divided into five thematic sections. The first section includes essays on writing and the creative process; the second is a loose grouping of “personal essays” describing incidents and themes in Laurence’s own life. These are the essays where readers encounter Laurence most directly in her wry and idiosyncratic voice, particularly when she reveals the often sizeable gap between her internal reality and external circumstances. She is at her comedic best when she describes her overreaction to an editor’s well-intended suggestion that she change the title of a forthcoming novel, or her pained response to an encounter with an annoying stranger on the Greyhound. She is likewise at her lyrical best in this section when she writes about the majesty of the Canadian landscape, and its role in the shaping of her identity: “Because that settlement and that land were my first and for many years my only real knowledge of this planet, in some profound way they remain my world, my way of viewing. My eyes were formed there.” 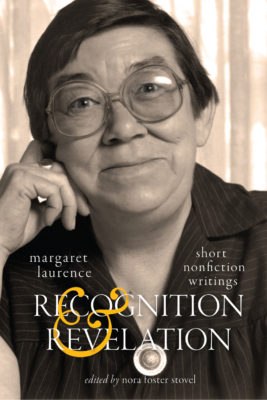 The third section focuses on Laurence’s relationship to Canadian literature, and includes introductions that Laurence provided to novels published in the New Canadian Library editions series, and a collection of speeches and tributes Laurence wrote in honour of important figures in the world of Canadian arts and letters. Part Four focuses on speeches Laurence delivered in order to advocate for nuclear disarmament, and Part Five, labelled as “socio-political essays,” extends this political and social consciousness into a broader scope, including topics such as freedom of speech and the impact of technology on gender roles. This section powerfully captures a sense of how new and nascent Canadian literature, and even Canadian identity, was when Laurence began championing it. On the other hand, some of the content of the nuclear disarmament essays comes to feel repetitive, although it is a useful insight into Laurence’s process to see her repurposing phrases and ideas.

Throughout the collection, Laurence’s wry sense of humour, moral compass, and eye for the ridiculous and the subtly moving shine through. For anyone who loves her fiction, these writings will complement and deepen their relationship to one of our most important Canadian authors. mRb