For a city that coasts on its creative reputation, Montreal often seems like it’s hovering on the fringe of a larger artistic world. Its (very) relative affordability makes it feel like more of a starting point for transient artists than an actual hub. As such, the alternative art scene here exists somewhere even further in the margins, in a kind of unseen space where weirdos thrive, free to experiment with odd ideas that might be discarded elsewhere. This is the world inhabited by Rick Trembles, a prolific illustrator, cartoonist, musician, and permanent wearer of very large sunglasses that always leave you wondering if he’s actually looking at you or staring somewhere right above your head.

With Represented Immobilized, a graphic memoir published by Conundrum Press, Trembles takes us beyond his impenetrable appearance, additionally defined by an all-black wardrobe and an unruly mop of jet-black hair, through a series of autobiographical strips, each describing a different moment in the artist’s life. Unsurprisingly, considering the way Trembles’ mind is tuned and his eclectic body of work, the memories chosen are scattered and seemingly random: a childhood nightmare about statues in a basement, getting robbed while buying comic books, being kicked out of a Who concert, chopping down a tree on Saint-Laurent Boulevard to try and stop gentrification. 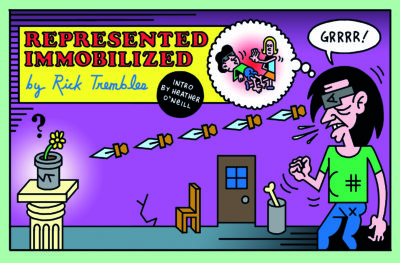 More typical memories of first kisses and fights are mixed in with darker ones recalling creepy old men with wandering hands in small cinemas, unwilling childhood sexual experiences, or friends snatching purses from old ladies to afford hanging out at a pool hall. Trembles’ cartoon lettering occupies huge chunks of each strip, serving as quite a matter-of-fact narrator, like he’s trying to empty his brain of every outlying fact related to the specific memory. Introspection is sporadic, cumulating in a concluding strip that finds Trembles wondering why he’s even chosen to “freeze unworthy moments.”

“I chose reminiscences I was most worried about fading from memory as time wore on,” explains Trembles by email from his apartment a few blocks from mine, as dictated by pandemic-era interview etiquette. “Not sure how I decided they were likely candidates for amnesia, maybe it’s because the people contained in them were so far from my life by then that I foresaw myself eventually replacing them with newer memories. Memory banks are finite, no? Don’t you need to empty them out before filling them up again? So, I wanted these comics to serve as a memory jog in case that ever happened in the future.”

Readers of the now-defunct Montreal Mirror will recognize Trembles’ trademark style, his slightly grotesque human shapes and often lewd copy, from Motion Picture Purgatory, the comic-strip film reviews that first appeared in the paper in 1985. “I got kicked out a few years later for insisting on writing about what they considered questionable topics, like films containing sex and violence. A change of editorship a decade later and I was rehired completely uncensored until the paper folded in 2012,” he adds. While two books of these comic-strip critiques have been published by UK’s Fab Press and mini versions of these reviews still appear monthly on the Canuxploitation blog dedicated to Canadian trash cinema, his experience drawing more autobiographical comics far precedes his success with Motion Picture Purgatory.

“As a child, I called my first stab at comics ‘The Tremendo’ to merge my last name with ‘tremendous,’” Trembles recalls. “My father was a commercial artist and even a cartoonist when he was younger, and it wasn’t easy growing up in his shadow. He kept correcting my early efforts out of existence, so I eventually stopped showing him my doodles for fear of shrinking into nothingness before his immense professionalism.” While his father’s career choice might have inspired a young Trembles to start doodling away, he ended up following a different path, one forged by the emergence of punk in 1970s Montreal. “When punk started, I submitted to DIY zines which were printed ultra-cheap, so my work has remained predominantly B&W line-art and easy to reproduce to this day.”

As a book, this collection not only immortalizes Trembles’ various memories, but also the moment in Montreal DIY culture that first spawned their initial publication.

Aside from contributing to a variety of zines from the 1970s onwards, including starting his own “post-punk newsprint music/comix” called Sugar Diet Magazine, Trembles also did an autobiographical comic titled Eighties Diaries for Vice until, according to him, “those assholes kicked me out when they were gearing towards their U.S. move.” It’s also a local zine that first published the memories collected within Represented Immobilized. Between 1996 and 2003, they appeared in the pages of Fish Piss, Louis Rastelli’s chronicle of indie literature and comics. “There was a bit of a Montreal DIY comix explosion kicking in by then, so I ended up in lots of other people’s zines and published little minis of my own, too.”

As a book, this collection not only immortalizes Trembles’ various memories, but also the moment in Montreal DIY culture that first spawned their initial publication. “You could survive dirt poor in this city back in the day. That’s dead as the dodo now. The rent for my first 3 1/2 in The Plateau in the mid-80s was 90 bucks a month. Now these dumps are million-dollar condos.” The polishing of many neighbourhoods and subsequent rising rents might evoke the fear that this previously mentioned breeding space for weirdos might disappear from the city. But worry not, there is a weirdo side to every coin. “I have no idea where the ‘underground/alternative comics and zine scene’ is these days,” Trembles admits. “It’s akin to the ‘underground/alternative music scene’ in that I’m always blown away whenever I accidentally discover something outta the blue on my own, because nobody ever covers this stuff. There are still little pockets of experimental music/comix innovation hidden all over the globe, too weird to garner widespread coverage. And the weirder the better for me.”

Tacked on at the end of the autobiographical strips is a series of “One Minute Worries,” which Trembles prefaces by describing as his attempt at documenting his “broke ass trying to get by on nickels & dimes” during the spring of 2015. “With ‘One Minute Worries’ I also wanted to make an adventure comic, and my quest was how to live on pennies for a month solid since I was so broke at the time. I was also really stressed out as a result, so injecting humour into the situation provided a pressure valve for me. At the end of every day, I deliberately gave myself no longer than one minute to summarize its highlights/lowlights, that’s why the artwork is so loosey-goosey.”

The resulting combination of the book’s two parts serves as a kind of self-deprecating portrait of the underground artist, revealing the more mundane underbelly of it all. Turns out, punk rock dudes sometimes just need to figure out how to change a lightbulb for cheap, worry about ants in their apartments, and be insecure about their “beer- tits.” Considering the book’s Heather O’Neill-penned preface mentions some kind of experimental autobiography, Represented Immobilized will not be the last we’ll be hearing about the secret inner workings of Rick Trembles. “I’ve been working on that since the 80s and it seems to be in a perpetual state of transmogrification. The ultimate in navel-gazing. Case in point: now I’m going to have to rewrite the last chapter to include my innermost feelings about how this interview we’re doing went!” mRb