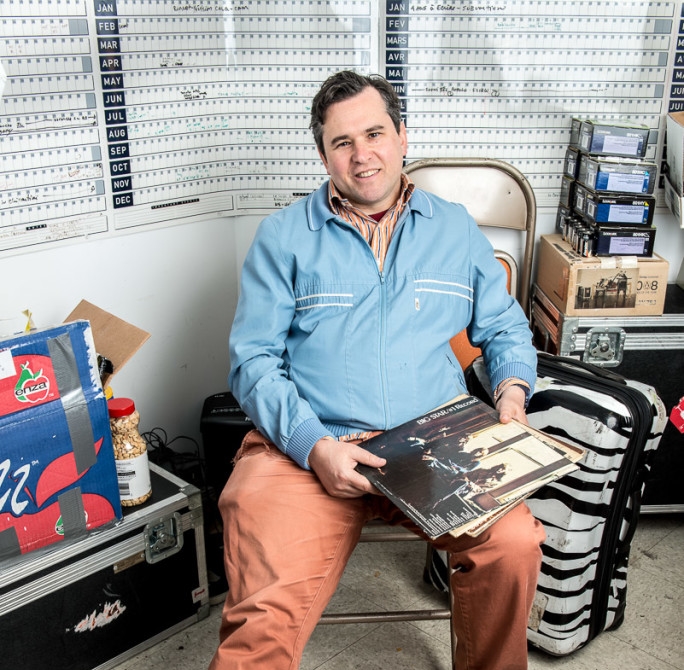 “I can’t do realism. I mean, it’s a lie,” Jacob Wren says with a laugh in his voice. Sitting across from me in a café in Mile-Ex, the prolific novelist and artist continues, “a book isn’t reality. Reality isn’t even reality.”

We’re well into our conversation about his new novel and this is the latest aphorism he has used to explain his creative process while writing Rich and Poor, a work that is both a meditation on economic inequality and a plot-driven tale of suspense. We’re discussing the challenge of writing a contemporary political novel when political fiction has for so long been dominated by dystopian allegory and didactic realism.

“Both those things interest me,” Wren tells me, and indeed Rich and Poor can be seen to draw on both traditions, but it’s also something else entirely. Just as he rejects realism, he also rejects the gloom of dystopianism. “I’m basically hopeless,” he says, “but I don’t want to write hopeless books. A book is a fantasy, anything can happen. I’m looking for possibility.” His aim, he tells me, was to write a contemporary political novel “that’s not condescending to the reader, that’s fun to read, that’s a page turner, but is also experimental.” 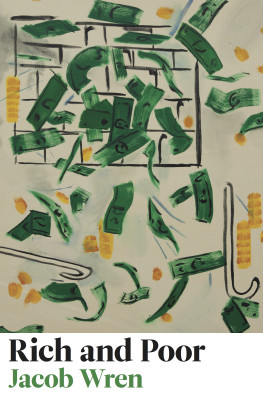 Wren has more than achieved this goal. A political novel for our time, Rich and Poor thoughtfully examines the disparity between the world’s richest citizens and everyone else. Written in unadorned, clear prose, the book is a contemporary parable loaded with brilliant reflections on capitalism, inequality, and the transformative possibilities of social justice.

The novel follows two unnamed men, the billionaire CEO of a multinational corporation and the penniless dishwasher who plots to kill him. Alternating between these two first-person narrators in short sections, this unconventional narrative style allows Wren to imagine two very different views of our contemporary world.

The rich man is irreverent, delivering “real talk” about the corrupt business world and remorselessly admitting to the many underhanded techniques he has used to get ahead, violence and betrayal among them. The poor man is an undocumented immigrant and former concert pianist who has given up music. While the rich man’s opinions are grandiose, and delivered at a leisurely pace, the poor man’s thoughts are clipped and often dulled by the exhaustion of manual labour. His narration is honest and direct, connecting with the reader and serving as the emotional core of the novel.

Both narrators engage actively with political questions, and their aphoristic reflections on class, labour, monopoly, personal responsibility, and violence appear throughout the novel. Rich and Poor is full of cool-eyed observations about early twenty-first-century capitalism, but the novel is just as articulate on small-p political issues, such as friendship, dignity, and the consolations of art. Interweaving the big issues with the small is central to the novel’s experimental project, which ultimately seeks to question the meaning of the political under late capitalism.

Tension builds as the poor man successfully embeds himself within the billionaire’s corporation, leading to the violent confrontation that changes both of their lives. The second part of the novel charts the aftermath of this encounter, in particular the poor man’s unexpected new role as a union organizer among farm labourers. Among Wren’s great achievements in Rich and Poor is his evocative depiction of the transformative power of building a movement for social justice, as opposed to the isolation that comes with the singleminded pursuit of vengeance. While his plot to murder the rich man kept him isolated and enraged, organizing the union connects the poor man with other people, new ideas, and eventually even to the music that he had abandoned. The shaping of individual workers into a political force with shared goals is movingly rendered during a union meeting when the workers are asked to speak about their hopes. “These words could be anything,” the poor man says, “but if we all listened to each other, we could later remember what others had said in moments we were losing faith or the will to go on.” The statements from the workers that follow call for dignity, respect, and show a desire for a more just world.

Weeks before Rich and Poor was published, a massive data leak from Panamanian law firm Mossack Fonseca gave the world a glimpse of the immense fortunes sheltered in tax havens. As we talk, Wren tells me that his novel was inspired by another moment when the politics of inequality were in the headlines: “The weeks I started writing it were the weeks I started hearing about Occupy Wall Street and reading David Graeber’s Debt: The First 5,000 Years. I was really thinking about what kind of novel would come out of that.”

Political questions have also been at the forefront of Wren’s three previous novels, Families are Formed Through Copulation, Revenge Fantasies of the Politically Dispossessed, and Polyamorous Love Song. For Wren, part of the challenge of writing has always been to bring political themes to what he calls the “often apolitical avant-garde writing tradition” that he identifies with. Wren’s early influences included the interdisciplinary American publisher Semiotext(e) and the artist novels available at Art Metropole, Toronto’s book-centric artist-run gallery. He admits, “as a writer, I’ve often been more inspired by the writing that happens in and around visual art than I have by literature, which often seems a bit old-fashioned.”

Wren’s work spans these worlds; his writing is only one part of his broader art practice. He came to Montreal in 2000 to join multidisciplinary group PME-ART, whose work focuses on conceptual, ephemeral performance and frequently performs internationally. Although his work as a novelist and performer emerged separately, they overlap in interesting ways; elements such as narrative, storytelling, and transcription frequently appear in the performance work of PME-ART.

In The DJ Who Gave Too Much Information, one of the group’s regular performances, members take turns telling stories and playing records. The experience is a bit like visiting the house of a friend with good taste in music, overly eager to share their collection. The 2014 performance Adventures can be found anywhere, même dans la mélancolie explicitly questioned the lines between art and literature as the group “re-wrote” a book by Portuguese novelist Fernando Pessoa in the Leonard and Bina Ellen Gallery over the course of several days, transcribing the text and adding additional content as they went along.

Reflecting on the Pessoa project, Wren explains that it resulted from a search for a “playful, open, alive way” to give the writer a greater respect by treating him disrespectfully. “Which is what I try to do when I’m writing my own books,” he says, seamlessly segueing back to his work as a writer. He continues, “I try to write in a very playful, live, energizing way, where of course I’m serious about it, but at the same time I’m also trying to take it not so seriously and find out what’s alive in it.”

Searching for what’s alive. For possibilities. For hope. With a gripping plot and sharp political analysis, Rich and Poor searches for the possibilities that are alive in our world of inequality. Wren finds them in community building, solidarity, resistance, and art. As the novel ends, the success of the union is far from certain, but the poor man who once turned his back on music is again singing loudly. mRb