A review of Serving Life by Richard King

Serving Life is the third mystery novel in the late Richard King’s “Nurse Linton, Detective Bellechasse Series.” King is quick to share the double meaning of his title with his reader: Serving Life begins in a courtroom, where Ian Chambers is sentenced to a lifetime in prison for murder, then quickly shifts to the emergency room at Montreal’s Gursky Memorial Hospital (an admiring nod to Mordecai Richler), where doctors and nurses flutter around incoming patients and discuss prognoses.

Among them is Annie Linton, an ER nurse with an eye for medical non-sequiturs. When a man without a heart condition dies suddenly from a heart attack, the doctor overseeing his case shrugs it off, muttering “these things happen.” But Annie can’t help but question what sent him into cardiac arrest in the first place. One man’s death quickly becomes a larger puzzle for Annie to solve: patients with dementia are dying from seemingly unrelated heart-related issues. 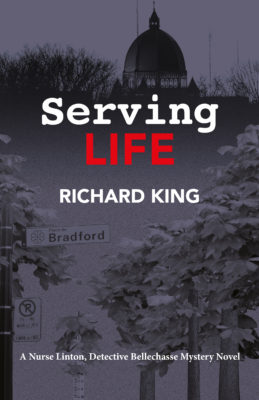 Annie soon discovers – by way of eavesdropping on family conversations and light interrogation – that a mysterious Dr. Hingston has been paying these same patients house visits and providing them with experimental medicine for their dementia. With no trace of any Dr. Hingston in the hospital database, Annie looks to the families of the patients for information. Fuelled by intuition and a lack of concrete evidence, Annie is determined to figure out the identity of Dr. Hingston and put an end to his deceptive and fatal scheme. The heirs to a successful dry-cleaning business, and children of one of the victims, are her initial leads. Even though one of them is unwilling to cooperate, what Annie gleans from them catalyzes a chain of events that lead her ever-closer to Hingston. As the series name suggests, Annie Linton’s sleuthing is not done alone: her boyfriend is Detective Gilles Bellechasse.

What seems like a simple whodunnit slowly unfolds into a well-thought-out web of interconnected crimes, marked by moral ambiguity and an unmistakably contemporary concern with medical misconduct. Suspicion is cast and recast as Gilles (and Annie, unofficially) investigate a series of local murders, including that of another researcher at the hospital, Dr. Tiddley, and follow evidence anywhere it will take them – from the hospital (where a highly contagious flu is being warned of), to Montreal’s police headquarters, a chemical plant, a condo in Outremont, and back to the courtroom glimpsed in the prologue, where Ian Chambers faces his life sentence. King’s story is deeply realized: information moves unexpectedly between characters, coincidences are woven into the fabric of the plot, and, as always in his work, Montreal appears true to size.

Serving Life is riveting, lighthearted, and, for all its twists and turns, crystalline. Suspense is cut with casual meetings at coffee shops, bottles of wine shared over dinner, and scenes of Annie and Gilles dealing with their respective daughters. King is a master storyteller, a writer with a thoroughly rendered plot and lived-in setting, and his prose style reflects that. It is purposive, clear, and brightest when the plot is at its thickest.

Richard King died in January 2022, just months before the publication of Serving Life, apparently with a draft of the fourth installment for the series underway. Longtime owner of the Paragraphe bookstore, former president of the Canadian Bookseller Association, writer, and hospital volunteer, King is remembered as a cherished, integral member of Montreal’s Anglophone community.

Serving Life is preceded by A Stab at Life (2020) and Banking on Life (April 2021). International readers can delight in the formidable addition to this series of thrilling mystery novels. Montrealers, however, will be able to see that the Linton, Bellechasse novels, especially Serving Life, are not only an homage to the mystery genre but also to King’s beloved Montreal – for its shadows, its scenery, and, above all, its people.mRb