A review of River City by John Farrow

Imagine a murder during the 1955 Maurice Richard Riot in Montreal. It happens right in front of the Sun Life Building, and the murder weapon is a legendary Quebec artefact. One pictures a smile on the author’s face as he feels the tension and potential of the set-up. Immediately thereafter, the smile becomes a grimace as the author tries to figure out how he can possibly contextualize the cauldron of social and political tensions that boiled over on that night. With so much history, where to start? To really tell the story, he’d have to go all the way back to the arrival of Jacques Cartier. That’s where most authors would say: “Imagine the murder happened in Orillia…” but not Trevor Ferguson. Working under the pen name of John Farrow, Ferguson invents Jacques Cartier’s Dagger, and makes it the unifying device for the mix of crime and history, the histoire noire, that is River City. The murder investigation is as hard-boiled as crime fiction comes and serves as the prequel to Ferguson’s Emile Cinq-Mars series. This dirty trip through la grande noirceur of the Duplessis era alternates chapters with the story of the Dagger, which is also the history of Montreal. It’s no textbook history lesson; it’s a visceral reliving of the battles, massacres, miracles, betrayals, and bargains to which Montreal, and Canada, owe their existence; it will make street names like Maisonneuve and Jeanne Mance bleed for you. Cartier’s Dagger, procured from a Hochelaga Iroquois Chief in exchange for a hat, moves through the hands of coureurs de bois, kings, insurance agents, fascists, and a prime minister, while the murder investigation drives to its resolution during the October Crisis. It’s amazing that anyone would even attempt to write this book. 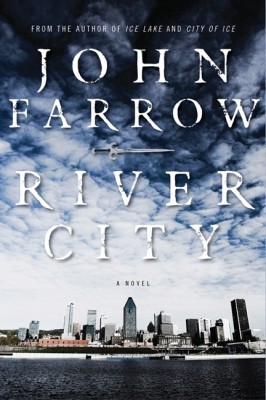 Ferguson has some impressive tools, not the least of which is patience – the book weighs in at 850 pages. He’s got an ability – which has also been ascribed to the painter Norman Rockwell – to drop the observer into a moment right on the edge of the action, and render it richly and lucidly. There are only two scenes which really clunked for this reader, one was a detective initiation, and the other is a spoiler, but that’s nothing given the sheer number of moments this book succeeds in constructing well.

Moving through a range of characters and periods without seeming like 400 years of Forrest Gump is an accomplishment which owes a great deal to Ferguson’s ear for dialogue – it’s clear that he’s also a playwright. A 1534 meeting between Cartier and Cardinal de Medici in a Sicilian villa evokes an elevated and distant tone without resorting to anachronistic language or having it feel flowery and camp. We understand that most of the murder investigation is conducted in French, and again this is conveyed lightly with occasional sentence inversions and telltale turns of phrase. Ferguson is also a wonderful mimic. It is harder to evaluate his imitation of Samuel de Champlain, but he does a marvellous Trudeau, so mercurial and angular that this reader could almost see that distinctive Gallic nose twitching beneath the printed words.

The island city lodged in the throat of the continent’s most significant waterway casts a spell on its inhabitants – Ferguson knows why, even if we don’t. He peels back time’s layers and explains the conflicted, almost bi-polar linguistic, religious, and political paroxysms to which Montreal is prone. He tells us a story, the seedy and corrupt kind that we love despite ourselves, helping us understand how even this inclination is part of our heritage. This book is a gift to the city of Montreal, and to all those who love a good murder. mRb