A review of Road to Thunder Hill by Connie Barnes Rose 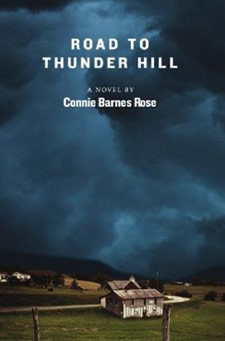 It’s a cliché to start a story with the main character waking up – startled or otherwise. But, Connie Barnes Rose’s use of this device in her latest novel, Road to Thunder Hill, manages to work. Not only because, from the get go, it shows readers how lost and confused her main character, Trish, is, but also because it acts as a synecdoche of her “awakening” to what her life has become; an awakening that will occur by the end of the novel whose narrative spans a single stormy weekend.

Trish and her husband Ray are on a break. After a huge fight on their daughter’s 16th birthday, Ray decides to take a job in another town 200 kilometres away. A year or so after the doomed birthday party, Ray is still away and his visits home aren’t as regular as they once were. When the novel opens, Ray is delayed by an unpredictable April storm, and Trish, in her anger, confusion, and unhappiness almost sets fire to her house, almost sleeps with her husband’s best friend, and ends up staying with her half-sister – whom she doesn’t particularly like – to wait out the storm.

Throughout Trish’s downward spiral of unhappiness and sulking, Barnes Rose strikes a perfect balance between the character’s inner and outer life, and readers are torn between the two sides presented. On the one hand, Trish is an unpleasant, negative person who constantly nags and complains – no wonder her husband left. But her internal dialogue shows a whole other side of the character that enables Barnes Rose to create a truly three-dimensional character. As unsympathetic as Trish originally is, she slowly becomes likable – as a character if not as a person – even when she acts like a child, sulking while everybody else is having fun.

It is obvious that Barnes Rose, who has previously published short stories – in fact, her collection of short stories Getting Out Of Town, was a finalist for the QSPELL Award for Fiction – has truly developed a strong voice that now resonates through Road to Thunder Hill. Written in a steady, unfaltering prose, her first novel carries readers through the mid-life crisis of a woman who needs to pluck up the courage to change.