A review of Rock 'n' Radio by Ian Howarth

In the age of podcasts and streaming, you could be excused for forgetting that commercial radio still exists. Indeed, it lumbers on, mostly for audiences either too entrenched in their habits to change them (listeners of classic rock, CBC, AM talk radio), or who don’t know any better (Top 40 pop). When I listen to local classic rock station CHOM, large chunks of the commercial breaks are devoted to the corporate owners’ satellite network and to hawking ad time on the station – not a good sign. Into this twilight era, like an only-slightly-premature obituary, comes local author Ian Howarth’s Rock ‘n’ Radio, a passionate paean to the golden age of the airwaves here in Montreal.

When Howarth, early in the book, uses the phrase “one of the most exciting eras in Montreal AM radio,” you get a strong sense of his overall tone: very specific, very enthusiastic, and very nerdy. He profiles the DJs and station owners – mostly men, along with a few women who tolerated the era’s Mad Men-like gender politics – who dominated the airwaves of English-language radio from the fifties to today, though the focus is mainly on the commercial and cultural heyday of the sixties and seventies. 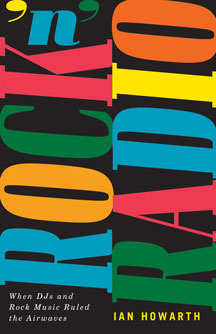 Perhaps unsurprisingly, Rock n’ Radio is heavy with baby boomer nostalgia. It was a time when a billboard of a girl in a bikini, with a young rep standing below it handing out samples, was considered a major marketing coup – young people back then had spending money but were not jaded to the ways of the market, essentially the polar opposite of today’s youth. At one point, former CKGM DJ Jim Sward, in a grandiose reverie, proclaims: “When you think back to the beginning of time – the very beginning of time – was there any sweeter spot to be born than 1946-1952? There’s no generation before or since that has had the same kind of momentum, influence, and power.” He’s referring specifically to the commercial viability of the youth market, but a generalized longing for the bygone days of the boomer heyday runs through the book.

As such, the tone is elegiac by nature: not only are many of the stations Howarth describes long gone, but the people themselves are fading away. A few of the DJs he profiles passed away after being interviewed, and in the short time since the book’s publication, former CFOX DJ Charles P. Rodney Chandler died and CHOM’s Tootall (Robert Wagenaar), one of the last holdovers from the station’s freewheeling pre-corporate era, retired.

Aside from radio geeks, fans of Montreal history also have some tidbits to enjoy here. There’s the time that AM station CKGM ran a listener survey that predicted the PQ’s sweeping 1976 election victory, and the poll results ended up on the front page of the Journal de Montréal – an early example of the media from the “two solitudes” paying attention to each other, a rare phenomenon to this day. More dramatically, there’s the time that FLQ militants invaded CKGM’s studio in 1970 and commandeered the airwaves, broadcasting revolutionary rants for several hours while surrounded by armed police.

And, though the book focuses more on the personalities and the business side of radio, there are a few great rock ‘n’ roll anecdotes as well. I never knew that the Beatles refused to return to Montreal after a misguided anti-Semitic attack on the very un-Jewish Ringo Starr, that Melissa Etheridge went from opening act to stadium headliner on the strength of being championed by CHOM’s Terry DiMonte, or that legendary local concert promoter Donald K. Donald got his start after Janis Joplin drunkenly threw up on the shoes of old-school promoter Sam Gesser, who then turned the rock end of his business over to Donald.

All told, Howarth’s unabashed fandom and attention to detail make the book mainly of interest to his fellow Montreal radio enthusiasts, a niche market no doubt – but his passion and thoroughness will ensure that those fans enjoy it very much indeed. mRb