A review of Rogue In Power by Christian Nadeau

Christian Nadeau is hardly the first person to criticize Stephen Harper and his Conservative Party for their efforts to steer Canada in a more right-wing direction, nor is he the first to claim that the Harper government has scorned this country’s democratic traditions. Over the past few years, such comments have become as ubiquitous as gripes about our weather.

What distinguishes Nadeau from most of Harper’s detractors is that he writes from the perspective of a politically engaged philosopher who wants to link his activism with the insights of his academic field. With Rogue in Power, Nadeau attempts “to combine [his] professional commitments with [his] duty as a citizen.” Nadeau aims to deploy the methods of philosophy to attack the strategies and values of the Harper government. 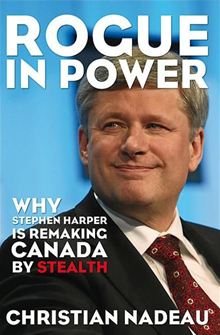 A political theory professor at l’Université de Montréal and the author of numerous scholarly works, Nadeau hopes that this book will persuade a general readership that liberal principles are superior to the principles upheld by the Harper administration. By “liberal” principles, Nadeau does not mean those of the Liberal Party or of any other specific party, nor does he mean the libertarian principles that sometimes go under the name of neo-liberalism. Nadeau espouses the progressive strain of liberalism that insists that freedom goes hand in hand with civic equality and fairness in the distribution of resources.

In contrast, Harper sees freedom as threatened by the egalitarian aims of the welfare state, which he believes must be curtailed even at the cost of greater social and economic inequality. Nadeau argues that the Harper government combines this economically libertarian ideology with a non-libertarian belief that government should promote traditional moral values. Nadeau acknowledges Harper’s willingness to be pragmatic, but he views this pragmatism as a mere tactical manoeuvre. Harper’s long-term goal is the fundamental reshaping of Canada. If Harper succeeds, Nadeau fears that Canada will have been transformed to the point of no return: regardless of which party is in power, Harper’s principles will reign supreme.

If Harper succeeds, Nadeau fears that Canada will have been transformed to the point of no return.

Many readers may share Nadeau’s belief that political philosophers should strive to influence public debate by making their ideas accessible to a wider audience, and agree with his frequently made claim that citizens need to be more politically engaged. Readers may also share a fair number of his misgivings about the goals and policies of the Harper government. Nonetheless, the book remains somewhat unsatisfying, largely because it covers far too many topics in too brief a space. Only small portions of the book deal directly with political theory, but despite Nadeau’s refreshingly jargon-free style, these sections are likely to leave non-specialists scratching their heads. Complicated theoretical distinctions, such as the distinction between the good and the just, are described in only a few sentences, and the ideas of high-calibre thinkers like Machiavelli and Hobbes are presented in a few short paragraphs or less. Popularization can be a good thing, but Nadeau’s attempt at popularization exceeds the limits of good sense.

The bulk of the book consists of Nadeau’s attacks on the individual policies of Harper’s government. Few policies are left unmentioned: the book covers dozens of topics from abortion to aboriginal policy. Unfortunately, almost no topic is analyzed in sufficient detail, and a bright and critically minded Harper supporter would probably not be swayed by these rather skimpy critiques.

Nadeau seldom acknowledges the reasons why some smart, well-intentioned, and highly informed people side with Harper on a variety of these issues. In this regard, the book shares a flaw with many undergraduate philosophy essays: it attacks a position without first making a serious effort to explain why an intelligent person might uphold that position. Readers already predisposed against Nadeau’s target may find this book an enjoyable read, but they won’t come away with many new insights. mRb