“This thing of darkness..."

A review of Rose & Poe by Jack Todd

Rose & Poe, a novel by Montreal Gazette sports columnist Jack Todd, is a North American fable loosely based on The Tempest. It tells the story of Poe, a simple-minded, hunchbacked gentle giant with six fingers and six toes, and his doting mother Rose. The pair have a modest existence cleaning houses, making cheese, tending goats, and merrymaking in their local tavern in Belle Coeur County, a fictional region of New England surrounded by water on three sides and Quebec the other.

Their lives are thrown into disarray when Miranda, the daughter of Prosper Thorne – once a hot-shot corporate lawyer, now a recluse with a crumbling mind and an unsettling obsession with his teenage daughter – is violently assaulted. Poe witnesses the attack on his childhood friend and carries her bruised and bleeding naked body into town. Distressed and unable to express himself or identify the assailant, Poe is arrested and immediately becomes the unwitting subject of a vortex of small-town fear and hatred. 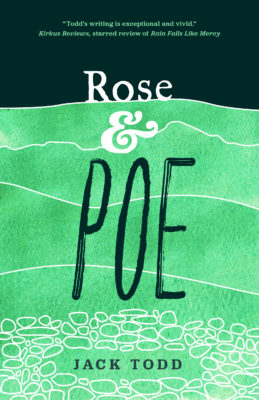 In the first section of the book, Todd delicately chronicles Poe’s beginnings and Rose’s unwavering devotion to her gormless but well-meaning son. From fighting for custody as a teenage mother – first against the heavily dandruffed, bloody-lipsticked social workers who show up at her door and later in court – to her epic pan-American bus voyage to fetch Poe and bring him home after he is conscripted into the army, each episode is quaint, didactic, and uncomplicated, tinged with humour and championing the resilience of motherly love in the face of adversity.

Despite the repeated unkindness Rose is subjected to from those around her, she is guileless and understanding of her bullies – even Poe’s father, who will not publicly acknowledge their relationship or child “because it just wouldn’t do.” She is poor, but generous with the little that she has – regardless of whether it’s her love, labour, singing, or body. And not everyone in Rose’s life is cold, unkind and immune to her charm; there are also plenty of compassionate characters, from the friendly innkeeper who helps Rose get Poe back from army camp to the lawyer who promises to take Poe’s case on pro bono.

The second half of the book descends into a less compelling courtroom procedural that unfolds in the musty local courthouse and lacks the charm, magic, and quirkiness of the first half. Poe is subjected to two vicious trials – by the law and by public opinion.

Todd’s lyrical but simple prose is a pleasure to read and is most effective in its descriptions of nature. Birds perch on telephone wires like “notes on sheet music,” pee soars in “golden six-foot arcs,” and a “buttermilk moon” crowns the night sky. There is an innocence and sincerity in his choice of metaphor – as if we are seeing the world through Poe’s eyes.

Like in the novel’s Shakespearean counterpart, nature takes centre stage. Its role is mostly benign and comforting, shoring Rose and Poe and their goats from the more complicated human world of bureaucracy, discrimination, and prejudice. But it also lashes out, reaching monstrous and terrifying heights in the form of a destructive storm that floods Belle Coeur County (which may or may not have been summoned by Prosper Thorne with a magical rod).

The focus on nature and lack of temporal references and modern technology gives the story the quality of a timeless fairy tale. Subtle references to magic and Poe’s giant size and body deformities add to this effect. Other than the title two, however, most of Todd’s characters lack depth and are stereotypes – perhaps inevitable for fixtures in a fable. Miranda’s characterization suffers the most. She is a quintessentially bland object of male desire – a damsel in distress, denied personality or meaningful dialogue. Other characters seem to exist primarily as a plot device to drive home The Tempest analogy.

Despite those shortcomings, Rose & Poe is a well-crafted tale about discrimination, prejudice, and the danger of being different. Most of all, it is a homage to motherly love. mRb