A review of Running Downhill Like Water by Jane Woods

“Life is unfair.” How many times have we heard this saying coming from the mouths of time-worn adults and scorned children alike? It’s the whole premise of Jane Woods’ second novel, Running Downhill Like Water, published by NON Publishing. The novel, which takes place in the small town of Sainte-Clémence, follows, over the span of fifty years, the life of four individuals to whom fate has been cruel: though they are full of potential and small hopes at first, circumstances of trauma and mental illness throw a wrench into their destiny. As the title suggests, their lives slowly come apart as time follows its inevitable path forward like a stream running downhill.

The story begins with Lucy, a socially anxious misfit whose dad abandons her and her mom for a stunning Russian woman, moving to Paris to live with the woman and her daughter. Convinced of her worthlessness, Lucy spins tall tales of a Russian childhood to feel better and struggles to integrate at school and make friends. Enters Sheila, a talented classical violinist who attends the same high school as Lucy: she tolerates her presence, and her lies, for a time before violently rejecting her. Raised to believe she is destined for greatness, Sheila’s arrogant nature takes a beating after failures both as a musician and as a mother.

The foursome is completed by brothers Neil and Evan, who move in with their zealously religious aunt Louisa after being orphaned. Louisa happens to be neighbours with Lucy who’s come home after college with no career prospects and even fewer social skills, refusing to mingle with society or take any further place in it. Lucy befriends her little neighbours and takes a liking to Neil especially: she lets them watch TV and plays cards with them, offering a respite from Louisa’s tyranny. The rigid Catholic upbringing offered by their aunt leaves severe scars on both brothers, as Neil violently rebels against indoctrination, and Evan tries to buy peace by assimilating his aunt’s beliefs. Neil ends up having a complete mental breakdown by early adulthood, and Evan takes on the mantle of caregiver for his big brother and subsequently suffers a severe crisis of faith. 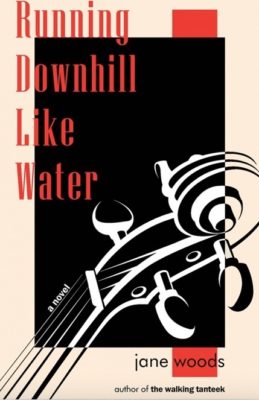 Woods’ prose is vivid and her character descriptions in particular are incisively funny, conjuring up indelible images. Take, for example, this description of Lucy’s neighbour Tamara: “Thin as a length of string, nose like a sharp wedge of cheese, a long, long body of rough terrain: conical hillocks, knobby knolls, sharp outcroppings.” The physical descriptions of her four main characters, though, remain vague, as she focuses more on their actions and psychological turmoil. The novel is written in third-person narrative and sectioned in four parts; Woods shifts point of view in each section, writing from their specific perspectives, starting with Lucy, Evan, then Sheila and finally, back with Evan. Neil never gets his own part, probably because he’d be a very unreliable narrator: he suffers from what he calls melancholia agitata, which is an outdated term for mixed mania or bipolar disorder, and has several psychotic episodes throughout the novel. Mental illness is a strong theme explored in all four main characters, as an inevitable consequence of truly sad circumstances. While it is never approached malignantly, few solutions are offered by the author, and I felt myself hoping for any kind of redemption for the characters by the end.

Woods’ talent in creating complex and flawed characters is undeniable by how quickly she made me both feel for them and dislike them: Lucy’s compulsive lying as a defence mechanism is heartbreaking as well as highly irritating; Sheila’s righteousness makes her cruel, but her later suffering is pitiable; Neil and Evan, however twisted they turn out to be, are victims of childhood abuse and severe mental illness. At times, it feels as though Woods is being unnecessarily brutal with their characters. But it’s not a bad thing at all, because it does reflect real life in a striking way, and she captures what makes humanity both terrible and great.mRb