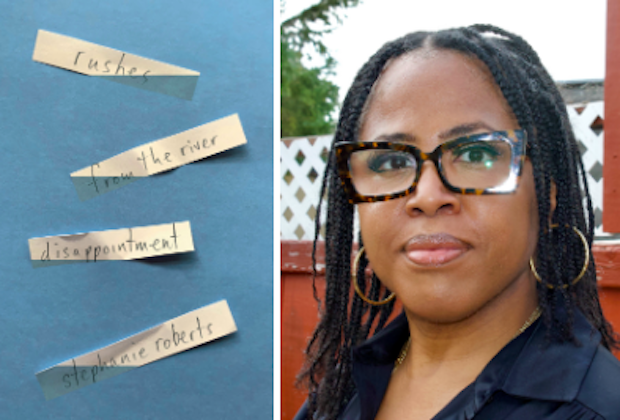 Then a Rush of Tenderness

rushes from the river disappointment

Rushes from the river disappointment by stephanie roberts is a sweeping force of music, pulsing images, clear wit, and tenderness. Within beautifully formed poems, there is extensive consideration of what we can understand about love and grief alongside faith and “unbelief ” over time. With synaesthetic shimmers of “mauve solitude,” “shy-blue,” and “turquoise impossibility,” roberts’ collection is also meditative, wry, and one you can return to again and again.

roberts’ epistemology is an attempt to understand the conditions and nature of faith, especially amid loss, injustices, and pain. In “Commute the Sentence,” the speaker opens: “every day i experience thinness cracking to bits / along a line of recurring grief / a monochrome voice echoes continue / without end.” In this single-sentence poem, which moves from left-aligned to right-aligned lines alternately, grief is relentless and yet the title is an imperative; it is a kind of request. Such a demand calls back to the first line of the book in “People Believing Badly,” when the speaker declares, “those of us who’ve seen miracles know how to ask.” In this way, reading rushes from the river disappointment is a little like moving through its title body of water. It bends through different terrains, the view changes over time, but each poem connects. 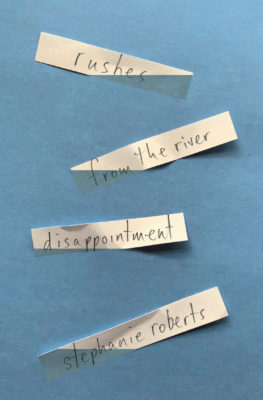 There is a sense of being caught between believing despite feeling forsaken and believing because of such a feeling. In “Tame,” the speaker considers the “candyass fear of loss” and asks, “does the moon care?” The same way “pain don’t care,” “the moon does not give a flying fuck.” This connection highlights one way roberts sustains complex philosophical questioning throughout the book. Tones, approaches, and atmospheres of the poems vary, allowing for many angles into its thinking. A range of diction and syntax is relished, showing roberts’ skill with the lyrical and colloquial. While “the lime-gold glow of old / and future dangle folded as fresh / cicadas on bracelets of branches” on one page, another poem is titled “OMFG: UNTIL THE TYGER LEARNS HOW TO WRITE.” In another playfully titled poem, “TEMPESTA: TUESDAY DECEMBER TWENTHIETH THREE THREE THREE AY EM,” a storm approaches and we are advised:

let her come, is what the orgasmic dream says, rocking
desire with a picture of your rider, head thrown back,
teeth arcing darkness…

The force of a storm whirs through “r” sounds, which repeat in a way that is stealthier than alliteration. There is only a let up, as the poem ends with “the heart’s assurance / that you don’t have the power to let her do anything.” The storm, like the moon, like pain, is indifferent to faith or lack thereof. About this, says roberts in an email interview, “Indifference seems to truly embody the opposite of love […] nature doesn’t love us as can also be the case with people.”

Indifference is considered in “This Is About Being Black.” In a narrow, justified column of text, a speaker gardens next to a neighbour who is proudly comfortable “reckoning sam cooke’s pain’s / the same as hers” while“everywhitebodyknows / everything. painting my nights / black and blue with grief then / copyrighting the music.” The form enacts the feeling of being fenced in, and within this space roberts distills the dynamics of cultural appropriation into what seems an all-too-common experience for the speaker. About this, roberts notes, “Black people can’t afford to be indifferent,” adding, “it is prudent for Black people to be hyper-aware of the self-gratification in white assumptions of sameness.” Later, in the book’s title and penultimate poem: “there are people capable of eating popcorn at the movie / of your agony,” again capturing the intensity and yet dailyness of experiencing this truth.

Reading roberts’ book is a little like moving through its title body of water. It bends through different terrains, the view changes over time, but each poem connects.

roberts goes on to express her “aspiration to remain tender and to practice tenderness,” even though “it is a struggle under the seemingly endless affronts to one’s humanity by racism, misogyny, and capitalism.” This aspiration is clear both in roberts’ book and practice, especially with “Scene V.” This is a list poem under an epigraph from British writer Emma Tranter: “I don’t know how to stay tender with this much blood in my mouth.” roberts explains, “Tranter’s words give graphic image to the tension I suffer between truthful and tender.” Notably, Tranter’s words have been misattributed to Shakespeare many times. Publishing the epigraph was itself an act of tenderness, roberts tells me, one to take the “strangely backhanded compliment [in which] Emma was erased” and “restore her authorship in print.” Though this book details many degrees of disappointment, it also thinks through resistance in the sense that to be disappointed implies one once had expectations, or one resisted giving up.

Introducing all about love, bell hooks writes, “disappointment and a pervasive feeling of brokenheartedness led me to begin thinking more deeply about the meaning of love in our culture,” and this same deep thinking characterizes roberts’ rushes. The disappointments are not only the loss of love in one’s own life, but disappointment in the norms that uphold power’s indifference to love. Thus, what is just as urgent as faith for the speakers of these poems is the relationship between believing and loving. roberts tells me, “In spite of past hurts and future uncertainties, under the weight of doubt, the Beloved must accept into her own life the Lover’s offer of the imperfect self. This belief in i love you.” This necessity and difficulty are felt in the “opening liturgy / of i love you” and the “smoke signals” in response to i love you. The utterance speaks to both what one chooses to believe and what one must believe. As hooks notes later in all about love, “the deeply cynical who have lost all belief in love’s power, have to step blindly out of faith.”

Similarly, roberts explains, “You can exercise faith without love, you can have faith without even very much thought, but you can’t love without faith. Many failures of love come not from lack of emotion but lack of faith.” A question that arises then is, what is proof to the faithful? In “Winter Aubade,” the speaker laments, “calculus is unforgiving / – the horror-relief over such proof / is intense.” This compound noun, “horror-relief,” captures the push and pull of disappointment as well as the way roberts’ collection holds space for such complexity.

Each poem warrants more detailed attention and there are more dimensions of these rushes to explore. Finally, though, one of the major delights in reading roberts is a profound enjoyment of language throughout, as in, “I’m going to write a book called god awful poems comprised of the most red love poems my sad glad heart can mustard.” Long and short sentences alike brim with energy and polysemy, as in, “each spring a hesitation.” There is joy in the slow-down to parse the syntax as the line breaks it, to falter and reflect on each word. There is faith in what language can do even if “poets lie definitively.” mRb