Rwanda and the New Scramble for Africa

Deep-seated ethnic enmity erupted in a hundred-day genocidal rampage during which Hutus killed Tutsis, a rampage that was stopped by the Rwandan Patriotic Front (RPF). A noble Canadian general tried to end the bloodletting, but a dysfunctional United Nations refused to give him resources. Washington was caught off guard by the slaughter, but it has since apologized for failing to intervene and has committed to never again avoid its responsibility to protect.

In Rwanda and the New Scramble for Africa, Robin Philpot demolishes this version of history.

Philpot points out that while the official story begins on April 6, 1994, any serious investigation must go back to at least October 1, 1990. On that day, an army of mostly exiled Tutsi elite invaded Rwanda. The Ugandan government claimed that 4,000 of its troops, including the defense minister and the head of intelligence, “deserted” to participate in the invasion. This unbelievable explanation has largely been accepted since Washington and London backed Uganda’s incursion into Rwanda. 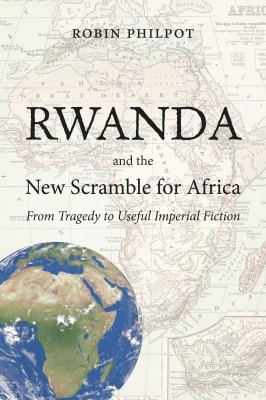 More than 90% Tutsi, the RPF could never have gained power democratically in a country where only 15% of the population was Tutsi. Even military victory looked difficult until economic adjustments by the International Monetary Fund and Western-promoted political reforms weakened the Rwandan government. The RPF also benefited from the United Nations Assistance Mission For Rwanda (UNAMIR) being dispatched to keep the peace. According to Gilbert Ngijo, political assistant to the civilian commander of UNAMIR, “He [UNAMIR commander General Romeo Dallaire] let the RPF get arms. He allowed UNAMIR troops to train RPF soldiers. United Nations troops provided the logistics for the RPF. They even fed them.”

On April 6, 1994, the plane carrying President of Rwanda Juvénal Habyarimana and Burundian President Cyprien Ntaryamira, both Hutu, was shot down. A French judge pointed the finger at Paul Kagame and the RPF, but the head of the International Criminal Tribunal for Rwanda (ICTR), Canadian Louise Arbour, refused to investigate evidence implicating the RPF. When the ICTR prosecutor who took over from Arbour, Carla del Ponte, did look at the RPF’s role in shooting down Habyarimana’s plane, the British and Americans had her removed.

Habyarimana’s assassination sparked mass killings (but no planned genocide, according to the ICTR). Five days after Habyarimana’s death, an internal US memorandum warned of “hundreds of thousands of deaths,” but Philpot notes, “even though they knew that the massacres would occur and that millions would flee to other countries, the Americans devoted all their efforts to forcing the United Nations to withdraw its unamir troops.”

If left to its own devices, unamir would have blocked the RPF from capturing Kigali; however, Washington was motivated to undermine French influence and improve the prospects of North American companies in the nearby mineral-rich eastern Democratic Republic of Congo.

Ottawa has supported this witch hunt, and Philpot points to the example of Faustin Twagiramungu, a former Rwandan prime minister denied a Canadian visa: “The Prime Minister of the government that supposedly ended the genocide had now become a génocidaire. Canada had already received Prime Minister Faustin Twagiramngu [sic] with all honours in December 1994 when he was looking for funding to rebuild Rwanda under the RPF. Either Canada’s institutional memory is short and selective or, more likely, the country has a policy of supporting the RPF government at all costs.”

All told, Philpot has provided us with an invaluable resource for understanding the Rwandan tragedy and for countering those who cite the tragedy in order to justify Western military interventions. mRb