A review of Safe Passage: Travels Through The Twentieth Century by Donald Mckay 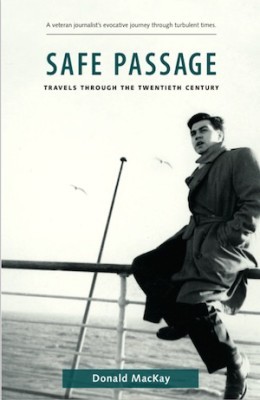 It would be difficult for an aspiring journalist not to feel a certain envy at the arc of Donald MacKay’s career. From a job editing local
stories for the Canadian Press in Halifax, he quickly went on to work as a foreign correspondent for nearly thirty years, and subsequently
wrote ten books on Canadian history. In his eleventh book, Safe Passage: Travels through the Twentieth Century, MacKay
takes stock of a long life and career.

Beginning with his childhood in Halifax and his struggle with tuberculosis as a teenager, he goes on to describe his experiences as a
reporter. He travelled across Canada to cover news as a British United Press employee, transmitting his stories using now-obsolete teletype machines. In 1950,
he relocated to London, England, where his work involved “not only chasing headlines but being ready to cover any subject under the sun at any time.” He
was in Hungary in 1956 when revolution broke out, in Paris during the upheaval of May 1968, and in Montreal at the time of the 1970 October Crisis. He later put his journalistic skills to a different use and wrote an oral history called The Lumberjacks, which he followed up with nine other works of non-fiction.

MacKay has a lot to tell, and at times it feels as though he is still trying to live up to the United Press motto of “a deadline every
minute.” Almost any of the news stories he chooses to summarize would profit from being discussed in greater depth; instead, he often lingers just long enough to pique the reader’s curiosity. Similarly, the childhood recollections that make up the first chapters of Safe Passage emerge as a sometimes messy
cascade of anecdotes.

It is a relief when MacKay slows down, as he does in a chapter where he describes working for Radio Free Europe (RFE) in Hungary
at the time of the Hungarian Revolution. On October 23, 1956, demonstrators in Budapest took to the streets and demanded the withdrawal of Soviet troops. For a time, the Soviet government seemed willing to negotiate, but on November 4 it cracked down and soon crushed the rebellion.

In the aftermath, RFE, whose mandate was to “agitate for change” and “break the communists’ monopoly on information,” was
accused of contributing to the conflict bybroadcasting unfounded promises ofAmerican military help. “‘In the Western capitals a practical manifestation of Western sympathy is expected at any hour,’” one RFE reporter announced. MacKay provides a detailed and thoughtful overview of events, shedding light on the ambiguous role played by a radio station that – at least in its early years – walked a fine line between broadcasting information and disseminating propaganda.

Elsewhere, he chronicles the challenges of working as a reporter in a dictatorship. Under the leadership of António de Oliveira Salazar,
the Portuguese government exercised strict control over the media. Despite being limited in what he could report, MacKay learned a
great deal about the effects of Salazar’s policies. He also provides a clear-eyed account of life in the Portuguese colony of Angola,
which he visited in 1954, noting that supposedly “assimilated” Blacks “were in effect second-class citizens who must carry identity
cards and were paid less than whites or mulattos.”

Though brimming with observations on politics, MacKay’s memoir offers disappointingly little in the way of introspection. There
is no rule stating that memoirs must divulge details about one’s private life, but part of their interest can be that they offer a view of
world events through the prism of personal experience. Safe Passage reveals more about MacKay’s career than it does about MacKay
himself – though it is a successful and varied career, and one that could interest avid news readers. mRb