A review of Salut King Kong by Edited by Elise Moser

Salut King Kong borrows its title from a story that was shortlisted for the 2013 Quebec Writing Competition, about a teenager walking around his small town in a gorilla suit. A scant four pages, the reader has only one leaf to turn between beginning and ending, between the discovery of the costume and how the boy ends up in it, sweating in the park with a chocolate milkshake in paw, waiting for his co-worker crush to meet him with the dipping fries. Like the twenty-nine other pithy contributions, “Salut King Kong” is no longer than 1200 words. The stories are short and seldom (too) sweet; they showcase established talent as well as new voices. It’s a Montreal book timed perfectly for a Montreal metro ride. 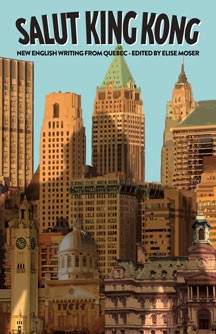 Since 1999, the Quebec Writers’ Federation and CBC Radio have collaborated on the competition, with Maisonneuve magazine publishing the winning prose and Véhicule Press anthologizing the entire shortlist. This fifth anthology, edited by Elise Moser, covers the last three years. If anything can be said of the selections taken as a whole, it’s that the book is a welcome reminder of how much can be established in tone, style, and atmosphere in so few words. On the other hand, the clipped little sentences and first-person narration favoured by many of the authors can become tiresome, inundating the reader with a seemingly mandated and circumscribed Short Story Style.

Fortunately, there is slightly more variation in subject matter to keep things interesting, though the familiar thematic stomping grounds of sex, love, and youth (or youthful adult ne’er-do-wells) have, evidently, not lost any allure to the writers featured. It’s no wonder, then, that the winning submissions each year are among the aberrant few to experiment with form. In particular, the most recent winners, 2014’s “The Glass Man,” by Allegra McKenzie, and 2013’s “Agnosis,” by Steven Manners, are noteworthy for departing so starkly from Short Story Style. The former, in particular, is deserving of its accolade – the simple fact that it is memorable after a few weeks is perhaps the highest recommendation that can be given to it and any of the other pieces that stand out among the crop.

Other distinctive works include one whose extensive title I’ll here abbreviate to “The Dialogues between Sherlock Holmes and the Author.” Ann Ward puts herself into a time-travelling romantic relationship with the “Famous and Fictional Baker Street Detective” (that’s another bit of the title), and the resulting vignettes would be very much at home in McSweeney’s. Susi Lovell’s “Taking Them There,” about a school bus driver who goes off-course, is simple and surprising. It elegantly weaves sparse details into a complete circle just as it ends, which is one of the particular gifts of the short story form; when done well, there’s nothing like it. “Breath,” by Josée Lafrenière, shares this simplicity. Two children wander into a haunted house, a dramatic stage erected to reveal a subtler, more heartrending death – it’s effective and affecting.

While some of the weakest pieces are not much more than a string of sentences lumped together (though even they occasionally yield an exceptional sentence or two), it bears repeating that there are a number of excellent stories within the book. A second piece by Stephen Manners, “The Unknown Unknown,” puts words to this sentiment: it’s “like when someone says they love you and then tell you something else, something they know will erase all the words that have passed before.” mRb