Sasquatch and the Green Sash

A review of Sasquatch and the Green Sash by Keith Henderson

For some of us, a certain fourteenth-century poem will forever be entwined with the memory of a certain 1975 movie.

Monty Python and the Holy Grail, for all its flights into full-blown silliness, was grounded in a thorough knowledge and obvious affection for its Arthurian source material, including Sir Gawain and the Green Knight, an epic poem of uncertain authorship. For this reviewer, the next stage of awareness came a few years later when the poem was an early item on the first-year, non-elective English literature syllabus at university, where a classroom of late-adolescents had life priorities that, alas, didn’t easily allow for the close study of medieval alliterative verse.

What finally provided the key was hearing The Pogues’ Shane MacGowan sing “The Sick Bed of Cuchulainn,” a twentieth-century-spanning drinking ballad that invoked the ancient Irish mythological figure whose exploits form a branch of the Arthurian family tree. For at least one listener, the song was so stirring that it felt all but imperative to get to grips, at long last, with what inspired it. 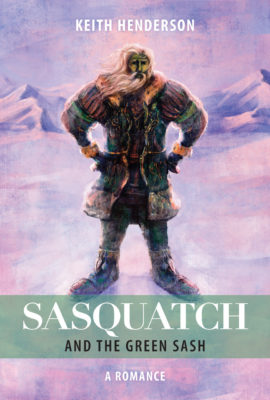 The point here is that we shouldn’t be precious or purist in these matters. Any means of entry into a classic is better than none at all. Keith Henderson may not have cut his teeth on the Pythons and The Pogues, but he’s acting on a similar impulse. The storytelling tradition would never have become a tradition if people hadn’t been willing to work on variations of what came before, and in Sasquatch and the Green Sash, Henderson takes Sir Gawain and the Green Knight further afield than most would dare. Describing his project in the acknowledgements as “a hybrid thing, at once an adaptation, translation, and Canadianization,” he makes good on all three claims.

Henderson’s telling opens in the present-day Canadian North, in the domain of the Dene Nation. A Yuletide feast hosted by local bigwig Arthur LeMagne is disrupted by the uninvited arrival of “the most appalling figure, thickset, square, who in height outstripped all earthly men.” The apparition sets a dare: strike me your best blow with my best knife, but only if you’ll let me do the same to you after a year. Gavin McHenry, a melancholic young RCMP constable, takes him up on it, some would say foolishly. Thus begins a one-to-one clash of wits and brawn, set against a numinous Arctic backdrop and told in a rich narrative voice with just the right amount of Middle English seasoning. The sash of the title, gifted to Gavin by admiring maiden Ghylaine, is a piece of fabric with allegedly life-preserving properties. And, at this stage in a review, the no-spoiler statutes should be respected, even if the story is technically several hundred years old.

The finer points of the chivalric ideal can feel irretrievably lost to modern readers: among other things, its male-centric gender dynamics haven’t aged well. For that reason, a Sasquatch is an inspired choice of adversary – a legend recent enough in Canadian folklore to carry a frisson even into the cynical internet age. K. S. Whetter provides an introduction that does a handy job of placing both the original and Henderson’s re-jig within the Romantic tradition. Enhancing the book’s old-yet-new feel are the boy’s-adventure illustrations by Steve Adams and the use of a typographical font distinguished most notably by its frequent employment of a curlicue extending from the top of the lowercase t’s and p’s. The latter is a device that can stand for the whole project: at first its quirks distract, but you get used to it, and soon enough you barely notice it, too caught up in a well-told yarn to care much about anything else. And if, upon finishing, you should happen to feel moved to investigate or revisit the work of that anonymous ancient versifier, all the better. mRb