Growing up in rural Ontario with no newspapers, no radio, and three TV channels, I used to shudder at the roar of canned laughter beating through a thin wall between the living room and my desk. Prime-time TV was a constant, except when the weather was good or there was nothing on but “a CBC special.” In our house, the genre had a name of its own.

At university I soon developed the newspaper habit, along with a taste for Peter Gzowski’s psyche-defining morning radio show and Barbara Frum’s trenchant interviews at dinnertime. In those days, you couldn’t give CBC radio a miss and still consider yourself well-informed. 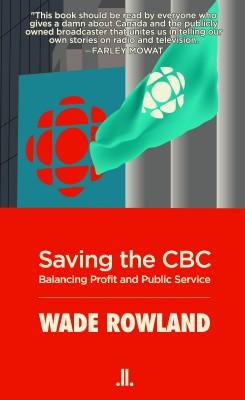 How times have changed. These days I read three morning newspapers, watch hbo almost exclusively, and am married to a foreigner who leaves the room whenever he hears the sonorous voice of Peter Mansbridge. If the perky Wendy Mesley is hosting The National, he’ll stick around long enough to mention she’s Mansbridge’s ex-wife, at which point I once again point out how civilised we Canadians are. It’s one of those married conversation rituals.

On my own, I channel hop past the truly egregious items that crowd out useful information and stop at the ad-shortened The National: weather damage, accidents, consumer fraud, medical disasters – punch-in-the- gut stories designed to produce a mixture of awe and guilty relief at bedtime.

There you have it, all shades of the good grey CBC, from annoyance to necessity to contentious curiosity, which brings me to Wade Rowland’s manifesto Saving the CBC: Balancing Profit and Public Service. Reading this cri de cœur for Canada’s public broadcaster aroused a paradoxical reaction: first alarm, then a fierce desire to see the whole bureaucratic mess shaken up or shaken down.

Formerly a senior manager at both the Mother Corp. and CTV, Rowland is now a media professor at York University. His prognosis is gloomy and passionately argued. He believes the CBC is facing fiscal problems it cannot survive without radical reform. Since 1985, federal funding has been cut by two-thirds while total government expenditures rose by fifty per cent. Some time soon, a private broadcaster will snag broadcast rights to nhl hockey, divesting CBC of $100 million a year in advertising revenues and precipitating “an unprecedented financial crisis.” So, like health care and pensions, is on the proverbial collision course.

Rowland’s ten-point reform program includes abolition of all advertising, elimination of professional sports broadcasting, increased in-house production and local programming, expansion of CBC radio with no ads, and greater government subsidy.All ideas that would take the CBC back to a simpler, gentler time when it was part of the vital national glue I experienced in my intellectually formative years.

A short, meaty book, Saving the CBC explains how and why the organization was founded as well as how internal bureaucratic struggles have plagued it for eons. Rowland’s own experience as a tv news consultant in the mid-1990s is candidly presented as “A Cautionary Tale.” When the head of English- language television, Ivan Fecan, sent out a memo suggesting CBC news should step out of the commercial ratings game and instead concentrate on in-depth reporting and analysis, Rowland wrote a reply for his boss, news VP Ted Kotcheff, vividly defending entrepreneurial TV, arguing that CBC had to compete with commercial broadcasters. Kotcheff was later ousted in “a palace coup” and Rowland was dispatched to the basement, where his phone never rang.

“In retrospect,” Rowland writes, “I can see that we were both far too enamoured to competitive rivalry in the industry, and not creative enough to see how something better could be built outside the commercial framework.” Building that something better is the central argument of Saving the CBC, which sets out an altruistic path to a pure public service institution. It’s a useful summary of all that’s wrong with CBC, a dense, fact-filled work that has already succeeded in stirring debate about the future of public broadcasting in this country.

What’s missing is the future.There is the very real possibility that tv as we know it will soon go the way of the book – leaving content providers to scramble for new forms of delivery of their work. In that context, whether CBC should produce drama and variety in-house or buy it from independent producers may be a moot point. Maybe producing content is CBC’s future, as networks morph into new beasts altogether. For certain, the future of CBC has a lot more to do with the future of tv in general than with how well the organization conforms to the role its founders envisioned half a century ago.

Most discouraging, he quotes the musings of Robert Rabinovitch (CBC president from 1999 to 2007) from a 2010 interview: “So you have to ask yourself, what is the CBC for? I don’t know the answer, but I do know the way it is right now is embarrassing. It’s going to get worse.” A comment, Rowland says, that illustrates both the dire nature of the predicament “and Rabinovitch’s fundamental unsuitability for the position.” Indeed.