A review of Saving the City by Daniel Sanger

Daniel Sanger’s Saving the City: The Challenge of Transforming a Modern Metropolis is a meticulous yet immensely readable chronicle of the evolution of Projet Montréal, interwoven with a solid retelling of Montreal municipal politics over the last twenty years. Part oral history, part memoir and part political history, Sanger presents an insider’s account of the party’s rise to power with the detached analysis one would expect from a veteran journalist. Given the obvious emotional attachment that would come with dedicating a solid chunk of one’s life to nurturing and developing a political movement as transformative as Projet Montréal, Sanger’s task is a difficult one, especially given the circumstances surrounding Sanger’s departure from the party, but he manages successfully.

Sanger achieves a subtly neutral tone throughout, assisted through the often eye-opening candour of big-name party members past and present who help tell the story. It leads me to conclude that Sanger was not only well-liked by the people at Projet Montréal, but that they all seemed to understand the necessity of contributing to this book in the most transparent way possible. Everything is out on the table. The book occasionally reads like an extended post-mortem, dissecting every election, decision, success, failure and scandal since the party’s creation in 2004. 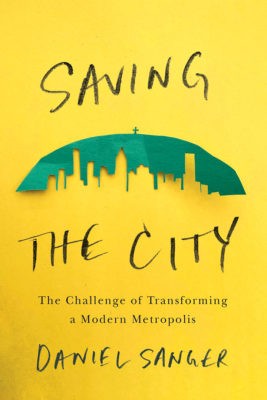 Sanger provides thought-provoking insights. He suggests that the party never would have been able to build a base of support in the Plateau had it not been for the creation of the borough system during the municipal mergers of the early 2000s (which attempted to provide responsibilities and decision-making powers to the inner-city boroughs on par with those of the formerly independent cities), and that the party owes its existence in part to the old regional transit planning body (the Agence métropolitaine de transport), where party founder Richard Bergeron worked.

It was with the approval of former AMT director Joël Gauthier that Bergeron dedicated many of his billable hours at the transit agency to laying the groundwork for what would become Projet Montréal (a fantastic irony given the party’s squeaky-clean reputation as well as its ascent to prominence in the wake of the fallout from the Charbonneau Commission – Gauthier was charged with filing false financial information by UPAC). Sanger also discusses the internal dynamics of the party – such as the rise and resignation of enfant terrible Luc Ferrandez, the tense leadership contest (and unanticipated victory) of Valérie Plante, and the controversy-laden borough mayoralty of Sue Montgomery. He also gets into how the idea of the Pink Line came about, which had much more to do with expert campaigning than workable public transit planning.

It is ironic that a party founded to promote the development of tramways as a means to end our dependence on cars (which Richard Bergeron has estimated sucks about $25 billion annually out of our economy) would wind up winning control of the city campaigning on a pink line drawn on a Métro map, while decades’ worth of Bergeron’s expert analysis and planning sits on a shelf. It would seem the appearance of change appealed to Montreal voters, while those who had drawn up the plans to implement it proved to be political liabilities.

I take issue with the choice of title: Montreal has not been saved, not yet at least, though I do think that Projet Montréal has given the city a fighting chance at positive transformation. Whether the progressive environmental party continues to evolve based on its core founding principles, or degenerates into the culty single-candidate political machines that have characterized Montreal municipal politics since time immemorial, remains to be seen.mRb