A review of Science Fiction by Joe Ollmann

On the heels of Joe Ollmann’s widely acclaimed graphic novel Mid-Life comes Science Fiction, the story of Mark Sett, a high school biology teacher who experiences an unforeseen crisis that shatters his belief system and threatens his long-term relationship. But it isn’t his unexpected breakdown that alienates his live-in girlfriend Sue, an over-educated grocery store clerk; rather, it’s what triggers his revelation and his wild claims that she finds so bewildering. 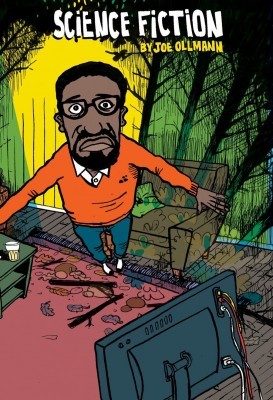 Mark, “a pragmatic and rarely frivolous man,” is concerned strictly with the facts and evidenced-based truths, so when he selects Taken at Night, a movie on the straight-to-the-video express, his girlfriend is perplexed. Not only is it science fiction, something her partner has always loathed, but it’s over-the-top cheesy. As Sue and Mark watch the opening scenes of the film, Mark begins to weep and later confesses that the film triggered a long-repressed memory of being abducted, not by gangsters or masked men, but by aliens.

Sue’s understandable response to her partner’s bombshell disclosure is shock, which quickly turns to annoyance. After all, asking your partner to believe a claim that is so dramatically out of character is an excessive demand. A bout of depression or teacher burnout would indeed have been easier to accept. While Sue’s reluctance to take such a leap in faith is understandable, most readers will find themselves looking for a way to believe Mark and not dismiss him as delusional.

Ollmann’s work is always replete with humour, and Science Fiction is no exception. While there could have been a more plausible cause for Mark’s crisis that was equally at odds with his scientific way of thinking, such as a sudden belief in God or creationism, it probably wouldn’t have been as funny. In spite of the outrageousness of Mark’s apparent abduction, the turmoil the couple experiences in the aftermath of his revelation is highly realistic, with Ollmann skilfully and accurately capturing the various stages of the couple’s demise.

Science Fiction is a page-turner in no small part because of the strong characters Ollmann has created and his mastery of the story’s pacing. In addition, the author has a great ear for dialogue, which is infused with a wonderful wry wit. His frames also show a wide range of emotion demonstrating his keen sense of observation. For the sake of variety, he could have experimented a little more with the layout, instead of repeatedly giving us the same nine-frame panel. In the end, Science Fiction is enjoyable, but it is not quite as entertaining as Mid-Life, for the simple reason that it is easier to relate to a 40-year-old man revisiting fatherhood than to a high school teacher who believes that he was once abducted by aliens.

But these are minor points. Ollmann is nevertheless a gifted storyteller.