Félix Séguin and Eric Thibault’s Inside the Montreal Mafia

Located somewhere near the intersection of an in-depth profile of the inner machinations of organized crime in Quebec, a recent history of the Montreal Mafia, and a years-long interview with a high-ranking gangster in need of a good psychologist, Inside the Montreal Mafia is an entertaining, illuminating, and often sobering look at the downfall of the Rizzuto crime family from the perspective of Vito Rizzuto’s close confidant and lieutenant, Andrew Scoppa. 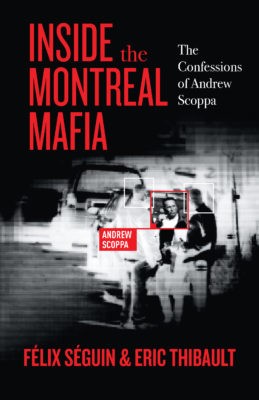 Written by veteran investigative journalists and crime reporters Félix Séguin and Eric Thibault, the book is their third collaboration focused on organized crime in Montreal and Quebec. Inside the Montreal Mafia is centered on the eye-opening revelations of Scoppa, who provided much of the material for the book in a series of clandestine interviews. Scoppa, who was gunned down outside a suburban Montreal gym in 2019, may hold the distinction of being the highest-ranking organized crime figure to ever speak so candidly about his experiences.

There is an element of art imitating – or perhaps influencing – life in this book. The authors frequently mention Scoppa’s need to speak frankly about his life, detailing the poverty of his youth and lack of strong role models as explanation for how he became involved in crime. It strongly evokes The Sopranos, in terms of the evident catharsis Scoppa draws from the confessional sessions held with Séguin and Thibault (Scoppa is described as “needing to be consoled”), and his nostalgic pining for the good, though generally no less violent, old days when organized crime in Montreal was more thoroughly dominated by Italian clans well-connected to New York City’s Five Families.

Séguin and Thibault also make the comparison explicit, referencing the show several times and describing Montreal’s mafiosi as speaking English with an accent similar to that of Tony Soprano. Despite these comparisons to arguably the most famous fictional gangster of all time, Scoppa is sufficiently complex to make him an intriguing character in his own right. He craves validation, revels in his status and stature within the hierarchy of the Mafia while simultaneously breaking its code of silence, and seeks recognition for his good deeds (particularly when he assists the police, once helping to eliminate a bad batch of heroin that was already in circulation) as much as the acumen he demonstrates with his legitimate businesses.

Expertly interwoven with Scoppa’s inside information is a detailed look at the collapse of the Rizzuto crime family and the near-simultaneous rise of the Hells Angels during the Quebec Biker War. Though the war was largely a conflict between rival outlaw motorcycle gangs for control of Quebec’s street-level drug trade, the nature of organized crime in Quebec and Montreal more specifically made it impossible for the Mafia to remain uninvolved (despite this being their preference). Scoppa reveals that the Mafia and bikers used the chaos of the conflict as an opportunity to eliminate troublemakers from within their own ranks.

Though the book is highly readable and engaging, certain details are repeated as though two different voices were trying to tell the same story. The authors also switch between referring to Scoppa as Andrew or Andrea, and this could have been standardized for clarity. Additionally, though the first person is often used, it’s not always clear which of the two authors is speaking.

A broader criticism is that, while interesting, it’s not entirely clear what public good this type of journalism serves. There’s already plenty of information about how organized crime works, plenty too about Mafia and biker activity in Quebec. In terms of history, it’s accessible, well-researched, provides new information (if not necessarily analysis), and most important of all, isn’t academic, but I’m not sure it’s going to change minds or drive policy. And even though I enjoyed it, I’m not sure it’s fundamentally anything more than a glimpse into the life and times of a marginally charismatic sociopath.mRb