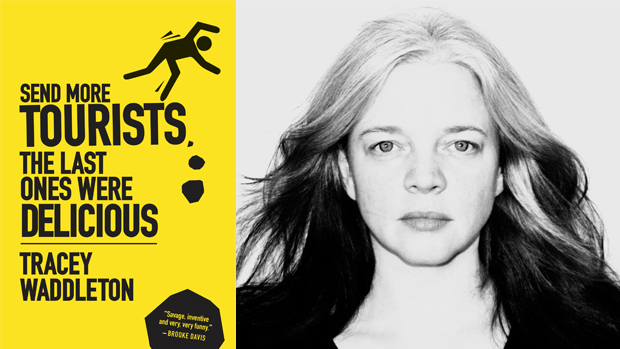 Send More Tourists… the Last Ones Were Delicious

Ff you type Trepassey into Google Maps, as I did early in September, you’ll see a marker placed precariously at the south- eastern edge of Newfoundland, surrounded by the falsely reassuring blue of the Atlantic Ocean. A thirty-plus-hour drive from Montreal, getting there appears to require a six- to sixteen-hour ferry from Nova Scotia, depending on the route you choose.

Next to the map, crowdsourced photos include a modest lighthouse against a curtain of white-grey fog and a pair of fresh-faced moose, captured in profile. A general search turns up a few links, among which are a municipal listing with a Hotmail address for the town and a detailed but sourceless Wikipedia page.

When I asked author Tracey Waddleton what it was like growing up there, she corrected my pronunciation of Newfoundland – Newf– und-land, not New-found-land – with a smile that put me at ease.

“It’s very isolated.” She described how the cod moratorium in the early ’90s cut the small fishing town’s population in half, from 1100 to some five or six hundred people. Waddleton was a teenager at the time. “But it has an interesting history,” she continued, a conspiratorial gleam in her eyes. “Pirates, shipwrecks. The Titanic went down off the coast.”

Waddleton decamped to St. John’s, two hours north, as soon as she could. 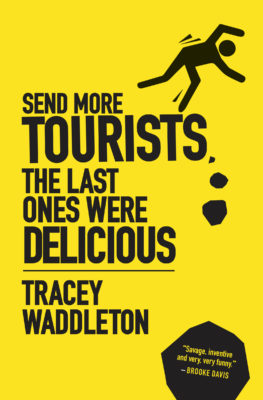 Send More Tourists… the Last Ones Were Delicious
Tracey Waddleton

Still, a sense of being trapped – by gender, mental illness, duty, class, or indeed, a town so small that everyone knows you – is palpable in many of the stories in Send More Tourists… the Last Ones Were Delicious, her debut fiction collection. Few of the book’s twenty-five stories are explicitly set on the Island, as Waddleton referred to it, but the Island has nevertheless seeped into her work.

“Newfoundland is full of storytellers,” she told me. “You’ll meet someone on the side of the road, and they’ll stop you for an hour. Their stories are often told with humour, and they’re often about dark, bleak things because of the situation people are in and the isolation.”

She might have been describing her own stories. Waddleton often uses humour and a business-as-usual tone to undercut her characters’ desperation. The book’s cheeky title is a prime example. The story unfolds on a drive between Montreal and St. John’s, the tension steadily mounting to life-or-death levels. Following the climax, the narrator encounters a moose on the highway and remarks dryly, “There is talk in the paper of a cull. Moose are discussed like terrorists, like they have intent. Look how they interfere with our lives, with our highways. The accidents.”

According to Waddleton, the story is autobiographical. “I have a terrible memory, though,” she said, shaking her head. “So I still feel like I put it together well.”

But the title story is an anomaly; Waddleton isn’t really an autobiographical writer. Instead, she adopts a wide range of points of view – she cited Italo Calvino, Zsuzsi Gartner, and George Saunders as influences – and her characters are a motley bunch. Sometimes, they have names, ages, genders, and other identifying features. More often, they are identifiable only by their experiences. “I want to be able to appeal to a reader despite gender,” she explained. “Not putting gender identifiers in is one thing I do that’s more intentional.”

Other than that, her writing process is instinctive. “I’m learning along with the reader when I’m writing. That probably makes me the most boring person to interview,” she joked. I assured her she was not alone; my writing process seems to involve pestering my cats, staring out the window, and occasionally talking to myself. It’s not exactly a spectator sport.

Still, I found something unique in her process: when she starts a story, she tends to finish it in a single sitting, before moving on to cuts. There’s also the manuscript’s dramatic origin story, which involved Waddleton quitting her job in Alberta and moving back home. That was in 2009. “I wanted to ‘be a writer,’” she said, the air quotes emphasizing how cliché her long-time dream seemed back then.

“Broke up with my boyfriend of seven years and found myself just writing all the time. I think in two years I wrote something like sixty or seventy stories. That’s where the stories in the book came from.”

If it sounds quick and easy, it wasn’t. She waited six years before some friends forcibly convinced her to send the collection to a publisher. “I kept psyching myself out thinking it wasn’t up to par,” she said. Though she’s currently working on a commissioned stage play and a novel, she prefers short fiction. “I suspect I’ll go back to short stories eventually,” she told me. “I still want to experiment. I still want to push boundaries.”

I wouldn’t label this collection as experimental, but it is varied. Waddleton adopts a variety of literary styles, from the realist to the Gothic. For instance, “Deep Blue Sea,” one of my personal favourites in the collection, reads like a surrealist, drug-fuelled bad dream, in which a second-person narrator’s loved ones die off one by one.

In contrast, “The Lottery” might be categorized as campus lit, as it features a student who dates an associate professor with a flair for literary-themed kink, the title a nod to Shirley Jackson’s much-anthologized story of the same name. Other stories, such as “Three Men Walk Into a Bank” and “Mr. Moriarty” are distinguished by their rigid structures. With most stories around ten pages, little is lost when a story doesn’t appeal to a particular reader’s tastes.

Some might consider Waddleton’s choice not to use punctuation around dialogue, along with her use of reported dialogue, experimental. However, I found both of those choices fitting for a writer who grew up among storytellers – most of this collection feels like it was meant to be read aloud. Waddleton is spare on physical descriptions, but she makes effective use of diction to evoke setting. Take the opening lines of one of the most powerful stories in the book: “How it was told was that Ben Walsh took Millie out behind the breakwater and did it to her there. He was a dirty old man, Ben Walsh. Everybody knew that.”

When I asked Waddleton where this story, titled “Old Ben Walsh,” came from, her response was swift: “It’s definitely a Newfoundland story.” It reads like a frightening parable on the fear directed towards survivors of sexual assault. “There has been a lot of silence in Newfoundland, in small communities. I assume that’s true everywhere else,” she said. “It’s more about quieting the rumours than undoing the situation or preventing it from happening again.” Waddleton’s characters aren’t literally silent, as in those incredible opening lines, but what they don’t say is important.

Waddleton has lived in Montreal for four years now. That, too, was a spur-of-the-moment decision. “I came to Montreal to visit, and it was full of, just this art, everywhere,” she said, gesturing. “I wanted to throw myself into that. I went home and I sold all of my stuff, and just moved up here with no plan.” Yet, she still finds herself writing about home. It reminded me of a line from one of her stories, in which a character waits for a return flight after a short visit home: “At the airport, there’s the feeling that you’ve left something behind.” mRb