A review of Serial Villain by Sherwin Tjia

Serial Villain is a cross between a short story collection and a comic book, written and illustrated by the prolifically un-pigeonhole-able Montreal artist Sherwin Tjia.

The collection of “A Dozen Thrilling Illustrated Tales!” works the noir genre in a style that is heavily informed by contemporary crime drama. Every third or fourth page of the book is a black-and-white illustration that depicts action scenes with purposefully gauche stiffness – think pulp novel covers done in comic strip flatness. The stories are driven by plots that ask questions like what if an assassin travelled back in time to kill Hitler’s parents but fell in love with his mother, or what if a serial killer was being tormented by the ghost of one of his victims? Tjia’s willingness to escalate the action and take these concepts to – and beyond – the extents of their natural limitations is the collection’s strongest point.

Character details and motivations are what give short stories their texture, but Serial Villain uses the tics of individuality to justify its plot twists; the bodyguard’s brother who kills their mutual client says, in the middle of a car chase, “I’m in over my head Tim. I owe some very dangerous people a great deal of money… It was the gambling.” Dialogue exposition is done this way in TV and film for scene economy, but print is not governed by the same pacing or visual constraints. The gambling debt is an opportunity to define the tone and fabric of the story, but this revelation is hard to accept when it pops up like a jack-in-the-box at an implausible point in the action. The stories would be richer if these threads were woven in earlier, and more thoroughly integrated with the illustrations. 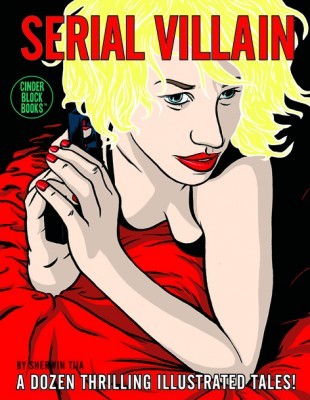 If Serial Villain is to be evaluated as neo-noir then it must stand up to stiff competition. Ellroy, Tarantino, and the Coen brothers use the beats between depravities to deliver human truths – consider the foot massage bit in Pulp Fiction, or McDormand lecturing Stormare at the end of Fargo. When opportunities for depth occur in Serial Villain the protagonists instead use sexual deflection in statements such as “Maybe he’d stick his penis in her aortic valve. He’d have to think about it later.” Violence and sex are the classic noir pairing, and these stories have plenty of both; however, something is lacking in the execution. There is a scene which has two people shooting at one another inside the same car: “BLAM! Falsetto fired. The bullet embedded itself in the ceiling,” but a bullet would punch right through the roof of a car. This can be read as a simple technicality, but it is also an illustration of why Serial Villain is unsuccessful in its attempt to be noir. The noir genre makes us ponder the consequences of violent acts – The Black Dahlia follows the waves that ripple outward from a single murder; Jack Nicholson wears an awkward bandage on his nose throughout Chinatown because of one knife flick – but the violence in Serial Villain is discontinuous and repetitive. Characters who are beaten unconscious twice in the same evening still think perfectly clearly afterwards. Like the bullet that embeds itself in the roof of the car, the consequences of the acts stop artificially wherever the author abandons them and so the events leave little physical or emotional mark on the characters or the reader.

The collection’s inventive plot devices and cinematic pacing show enormous potential. The illustrations define their own style and tell their own stories. Serial Villain is clearly smart, like the kid at the back of the class who doodles inventively disturbing scenes in textbook margins, but in a world where senseless violence and graceless sex are easy to find, this collection does little to add to either theme or improve our relationships with them, and ends up feeling like just another scream in the cacophony. mRb