Shaf and the Remington

A review of Shaf and the Remington by Rana Bose

Rana Bose’s Shaf and the Remington is a stunning accomplishment. Set in the fictional town of Sabzic, in an unspecified country in the Balkans, the book spans the period from the beginning of the Second World War to the end of the Cold War. Written in epistolary style, the story is split into four sections, each told from the respective viewpoint of a given character. 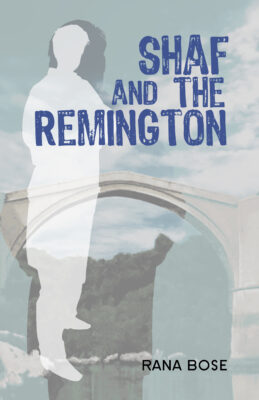 Shaf and the Remington
Rana Bose

In the first, we get to know Sabzic through the eyes of Ben as he recounts his childhood – a town where different cultures, languages, and religions have converged and overlapped for centuries, and where history seems to repeat itself as though on a predetermined schedule. A somewhat pious, reflective, and observant child, Ben, like most children, admires his parents, but especially his Bo (the word for father that he coined and that the rest of his family adopts). He was raised in a household where thoughtful and meaningful engagement was the norm, and information was exchanged freely. His father is a quiet, eagle-eyed man with a commanding presence who leads an obscure double life as a doctor and a revolutionary, standing in firm opposition to his own father’s fascist ideals. His mother, once a physicist, is to Ben the image of composure and practicality, though sometimes he notices a quiet rage burning beneath the surface that materializes when she thinks she is alone. Ben finds his fiery, independent, and openly rebellious older sister Nika to be quite his opposite. She is a long-term thinker, whereas he prefers to observe the minutiae of life and his environment. As Ben becomes distracted and disinterested in his studies, his parents hire Shaf, a friend of his father’s, as a tutor.

A philosopher, physics teacher, and his sister’s “secret” beau, Shaf enters Ben’s life. Ben is both perplexed and fascinated by this sometimes overly eccentric man, who tends to go off on long philosophical tangents, questioning his own views and challenging Ben to do the same during their lessons. Ben comes to admire him almost as much as his Bo, becoming determined to learn his teachings and deepen their relationship. Throughout this, the reverberations of war draw closer, and so too does the tragedy that will befall their family, which will inevitably cause a shift in Ben’s sense of self. Bose’s characters are vivid, distinctly established, and intricately developed, remaining clear in the reader’s mind long after having finished the book.

A departure from the linearity of the first section, the second grants us access into the mind of the ever-elusive Shaf. It takes us through Shaf’s muddled journey from before he met Ben’s father to his time spent tutoring young Ben, his experiences fighting as a partisan in the war, and his travels through Europe and the United States. Though the narrative style is true to the character, at times it is difficult to keep up with. His seemingly nonsensical and incoherent inner monologue causes the reader to be distracted from the story.

The last two sections are the shortest, briefly following Ben as an adult in his search for Shaf, who has been missing for forty years. Bose’s opulent and poetic prose entrances the reader, allowing one to feel present for every meal, stroll along the town’s canal, and diplomatic decision in each era described. He illustrates that even throughout war and atrocious acts of violence, beauty finds ways to remain.

Bose masterfully incorporates history, politics, philosophy, and physics into this gripping novel, transporting the reader to a place where time and space seem to bend and refract. Shaf and the Remington is an allegory of human nature, asking us to question the essence and roots of war and ideology.mRb

Val Rwigema is a multidisciplinary artist and writer currently living in Montreal.