A review of Shifting Earth by Cecil Castellucci

What if the grass were greener in another dimension?

Shifting Earth wastes no time introducing you to its two parallel worlds: on the second page, we see both main characters, botanist Maeve Lindholm and astronomer Zuzi Reed, attending what seems to be the same science conference. What sets them apart at first is the panels’ colour palette: Maeve’s Earth is living through the ravages of climate change, and its bleak brown and orange hues clearly illustrate how bare and hardly breathable it has become. In contrast, Zuzi’s world is full of warm light and vibrant greens, suggesting a much healthier ecosystem. Nevertheless, their different natures remain mysterious for a while longer: the panels are cleverly lined up in tiers, suggesting past and present in the same world rather than two completely different universes. 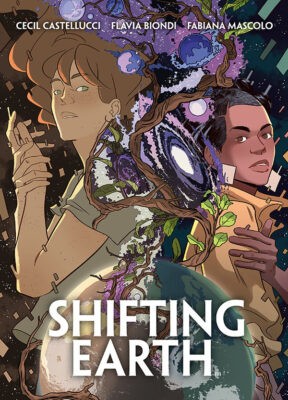 When Maeve is transported to Zuzi’s world in a freak particle storm accident, she feels as if she has stumbled into a utopian paradise – the answer to all her worries in her home world. However, even though Zuzi’s Earth seems full of promises with its luscious flora and fauna, it has its fair share of distorted and sinister human customs. The writer, Cecil Castellucci, does away with romantic notions about this new world, and dives deep into its dark sides; Maeve learns she is pregnant after a one-night fling with her old college friend Evan, and is forced to go through with the pregnancy against her wishes, as every potentially “useful” member of society is a very valuable asset in Zuzi’s world. What might be considered unethical eugenics in Maeve’s world is simply rational resource management in Zuzi’s.

Maeve and Zuzi are two sides of the same coin: as disabused scientists, they try to have their voices heard in rigid systems that are afraid of change and focused on short-term solutions. As a botanist, Maeve is desperately trying to find as many varieties of plants as possible to try and save biodiversity, which is getting more and more sparse as Big Agriculture favours the most efficient seeds, and their mutations, to feed the population. As for Zuzi, she is an astronomer with big dreams of space exploration in a world whose population is utterly uninterested in anything except their own planet, which is suffering in a different way. With land distributed in smaller islands instead of continents, and two moons in the sky, Zuzi’s world is prone to catastrophic floods and storms, and the fight for energy and order take over any possibility of further scientific studies.

What might have read as a dystopian future just a few years ago now feels much closer to reality; for example, seeing Maeve and Evan wearing masks to protect themselves from the toxic atmosphere, and syncing up their phones to verify their infection levels and create a temporary bubble to spend the night together, is reminiscent of some of the sanitary restrictions we had to observe only a few months ago, which made it a bittersweet read for me.

As for the story, it has big ambitions, and the pointed social commentary and complex characters might have benefitted from more time to unfold. At 112 pages, the story, with all its massive stakes, feels a bit rushed, and the loose ends are too neatly tied together for Shifting Earth to be as satisfying as it could have been. That said, if you enjoy science fiction, you’ll probably have a good time reading this comic; Flavia Biondi’s art and Fabiana Mascolo’s colouring jump off the page in vibrant, fluid storytelling, which beautifully illustrates Castellucci’s tale.mRb