The third English-language instalment of Shigeru Mizuki’s gargantuan manga history of Japan’s Showa era (the period from 1926 to 1989, defined by the reign of Emperor Hirohito) is the best yet. This sprawling series gradually deepens its gripping narrative as new layers and perspectives are added to a story that is relatively unknown to most Westerners. Part autobiography and part history lesson narrated by Mizuki’s famous yokai character Nezumi Otoko (literally and visually “Rat Man”), each Showa volume demonstrates how the political becomes personal by juxtaposing historical facts and events with the narrative of Mizuki and his family. But where volume one (covering 1926–1939, including the Depression years and the lead-up to war) was too often bogged down by a lengthy and rather uninvolving recounting of historical facts, and volume two (1939–1944, with a focus, naturally, on the Pacific War) suffered from a seemingly endless series of masterfully drawn but ultimately indistinguishable battle scenes populated by anonymous soldiers, the third instalment of the planned four-volume series takes the reader through a riveting account of the final decisive battles of World War II and – most importantly for the storytelling – gives more prominence to Mizuki himself. 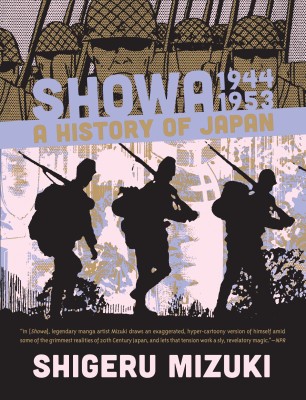 When we left Shigeru at the end of volume two, he was stranded, in a literal cliffhanger, on a mountainside in Papua New Guinea where he had been stationed as a soldier in Japan’s Imperial Army. The new book follows Shigeru’s attempts to stay alive as Japan’s military suffers decisive defeats and his company is stranded without supplies in the jungle. Although he endures a range of hardships including malaria, starvation, and the loss of his left arm in an air strike, the happy-go- lucky Shigeru is portrayed as something of a slacker who is oblivious to the severity of his circumstances as long as he has a bowl of rice in front of him. Given the seriousness of the situation, this narrative strategy seems odd at first, but as the army around him descends into the madness of mass suicide and desperate kamikaze attacks in the final months of the war, Shigeru’s innocent disposition functions as a humanizing counterpoint to a military culture devoted to last stands and absolute obedience to the Emperor. Surviving against all odds through the end of the war – the book, perhaps surprisingly, devotes only a few pages to the atomic bombing of Hiroshima and Nagasaki – Shigeru returns home to a war-torn Japan that is grappling to find a new direction in the aftermath of humiliating defeat. As the country adjusts to the American occupation and slowly emerges from post-war malaise, Shigeru drifts around the country and in and out of jobs until he finds his calling as an artist. Fittingly, the book ends with Shigeru going to Tokyo to try his hand at the new craze of comic books, thereby setting the stage for the fourth (and final) volume of this expansive Bildungsroman to depict Mizuki’s development into one of Japan’s most celebrated manga artists.

Drawn in a style that mixes hyper-realistic back- grounds, often traced from photographs, with cartoony character design, Showa treads a careful visual and narrative line between sombre moments of national as well as personal tragedy and a firm belief that few things are too serious for broad slapstick humour – or, for that matter, to be explained to the reader by a giant rat. As entertainingly offbeat as it is informative and thought-provoking, each new and increasingly impressive instalment reveals Showa to be a singular achievement with a historical and humanistic scope that is perhaps unparalleled in comics. mRb