Between Noise and Silence

A review of Rooms by Sina Queyras

Sina Queyras Rooms: Women, Writing, Woolf is a striking exploration of the kinds of circumstances that make a writing life possible. The narrative seamlessly traverses Queyras’s experiences of university classrooms and domestic spaces, academic and intimate conversations, crowds and solitude to show their path as a writer. While Queyras draws from Virginia Woolf’s oeuvre, much of their reflections interrogate Woolf’s well-worn declaration that for a woman to exercise creative freedom, she requires “a room of her own (with a lock) and 500 pounds a year.”

Queyras begins the book by recounting the jolt they felt when they encountered Woolf’s writing for the first time in 1988. “Nothing had ever felt so familiar and outrageous,” they write, “so foreign and so close.” In fact, throughout the text, Queyras tends to portray Woolf’s work as a force which acts upon them: “Why do [I] return again and again to Woolf? It is because the text made me!” They describe Woolf’s calibrated distance and attunement to the world around her, her capacity to render into language those details which others may fail to even grasp. They revere not just the “genius of her texts but [also] the genius of her living.” 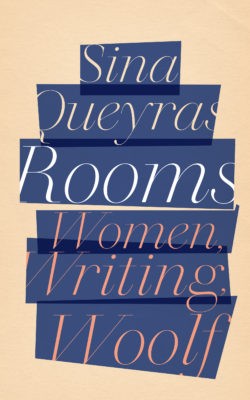 However, Queyras understands that this kind of attention to one’s life and one’s work is made possible by access to certain resources. Like the feminist writers and scholars they were moulded by, they always return to Woolf’s metaphor of “the room” which, at its core, represents the ideal of a writer having enough material security for “an authentic intellectual and creative practice.” What is exceptional about their project, however, is that Queyras is not only concerned with the fantasy of a “room of one’s own,” but the real spaces that young writers like them are moulded by – for better or for worse.

Throughout the book, Queyras describes the defensive posture of the university in the 1990s, the paranoia about the kind of damage women, queer people, and working-class people would do to traditional disciplines: “The academy, I had begun to realize, was dense as the concrete it was housed in. The academy was resistant. The academy was barricades.” As they pursue different literary programs across Canada, Queyras learns about the many ways in which one’s creative growth may be interrupted within academic spaces – through dwindling funds, abuses of power, and unyielding, market-driven assumptions about which kinds of stories and forms of storytelling are of value. Experiences within classrooms, workshops, and professors’ offices are often shown to leave young writers with only the feeling of anger. Rooms compels us to consider if and how this anger can be carried with grace.

Queyras also represents the domestic spaces they’ve occupied throughout their life. The home is shown to be a kind of enclosure – it can offer reprieve, or it can hide violence from view. These scenes of violence are seldom fully fleshed out in Queyras’ book. They represent the pain that proceeds from this violence as something which, in some cases, creates a mental fog and, in others, offers tremendous clarity. Queyras also examines the idea of a “creative partnership” – that is, what forms of intimate relationships can be creatively generative. They offer a tender image of them and their partner writing in adjacent rooms, and state that “we are all looking for some kind of equanimity: immersive, independent, yet connected.”

The “room of one’s own” is something which, decades later, maintains a grip on writers’ aspiration: “Still, one dreams of a particular room,” Queyras writes, “And with that room, a particular quality of mind […] The Internet is full of images of writers’ rooms, shelves, and desks.” Queyras is able to see beyond and intercept this glittering image. Can one shed all their other lived experiences of the world as they enter this private space? And are relationships with others not just as elusive and as essential for a creative practice? Queyras’ Rooms suggests that, in a world where creative expression is mediated by material constraints, what many writers are actually after is the right amount of noise and silence, care without confinement: “somewhere between retreat and community, there is space.”mRb

Aishwarya Singh is a writer, researcher, and recent M.A. graduate of McGill’s Department of English. She lives in Montreal.