A review of Six Degrees of Freedom by Nicolas Dickner

Shipping containers increasingly occupy the public imagination in ingeniously upcycled forms – retrofitted artist studios and tool sheds, a solution for low-cost housing. There is something so delightful in the idea of outfitting these small spaces with compact furnishings that it’s easy to forget their original purpose, the sheer number of containers moving across the world every day, and the wildly complex logistics of shipping everything from bananas to car parts to the occasional stowaway.

Six Degrees of Freedom, Nicolas Dickner’s story of the mysterious journey of a rogue “phantom container,” follows characters who have a healthy sense of wonder but are determined to make something of that wonder too, impatient as they are with the pedestrian uses humankind makes of its own inventions. The novel, translated into English by Lazer Lederhendler, doesn’t indulge much in romantic reflection; its characters move too quickly for that. They’re dreamers, but they also do.

Lisa is fifteen when the story opens and full of plans and ideas, many of them with the primary goal of shaking things up for her best friend Eric, an agoraphobic coding genius mostly unable to leave his bedroom. A disappointing end to a project involving a hot air balloon, a homemade parachute, Eric’s mother’s digital camera, and a GPS beacon leads her to a realization that will inform her approach to future projects: “The real goal of the balloon was its fabrication, the evenings spent coding, sewing, debugging, finding answers to questions and answers to the questions raised by the answers to the questions.” 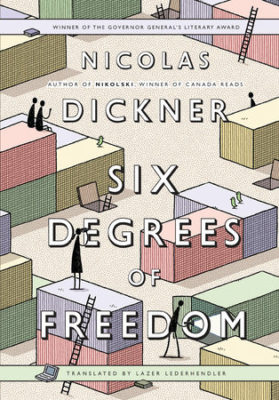 When Eric becomes interested in container shipping, Lisa chafes at the wasted potential of this technological innovation: “Every time you talk to me about containers, I get the feeling you’re describing a major achievement of humankind. Like the roads of the Roman Empire, but better.” And yet, she laments, such technology is used to ship “Bic pens and toilet brushes” when it should really, “I don’t know, push against the limits of the human experience, right?”

Lisa and Eric’s story alternates and eventually entwines with the story of Jay, a former computer pirate serving out a seven-year sentence working for the RCMP. She spends her days looking for credit card fraud and is unable to resist embarking on her own parallel investigation when her colleagues start trying to track down a phantom container they dub Papa Zulu.

Dickner is a true storyteller, and has a light touch with what could be weighty specifics of coding and container shipping. His prose is wry and witty, if sometimes a little insistently clever – Jay “toys with [a] cookie as if it were a subversive idea,” she sleeps on a “futon as thin as hope.” The energetic style, here skillfully reproduced in English by Lederhendler, reflects his characters’ curiosity and drive.

Early in the novel, Lisa helps her father renovate an eccentric old mansion and discovers a glorified crawl space that had clearly been some long-ago woman’s hideout: a lipstick-printed glass, an ashtray, a copy of Life magazine. She instinctively protects the sanctity of this secret space, keeping it from her father, who plasters over its entrance. The desire for private and, well, contained spaces is a recurring theme here, and the way that desire coexists with and is even wrapped up in the drive to “push the limits of the human experience” is what gives the story a depth that makes it more than just a good police yarn – adventure driven not by swaggering aspirations of domination, but by a search for freedom in the in-between, in the cracks that appear when geography is split wide open. mRb