Songs for the Cold of Heart

Since its publication in 2014, Eric Dupont’s La Fiancée américaine has sold more than sixty thousand copies in Quebec.

Using sales figures as any kind of metric for artistic worth is a slippery slope, of course. But the number above is worth pondering for several reasons. Check the shelves in just about every household in Quebec with any inclination toward literary fiction and you will find a copy of Dupont’s novel. It’s the Thriller or ABBA’s Greatest Hits of its world, with a popular reach most serious writers stopped dreaming of decades ago.

It’s fair to say, then, that the novel now finally available in English as Songs for the Cold of Heart is significant as a socio-cultural phenomenon, irrespective of its literary merits. Happily, those merits are many and varied. 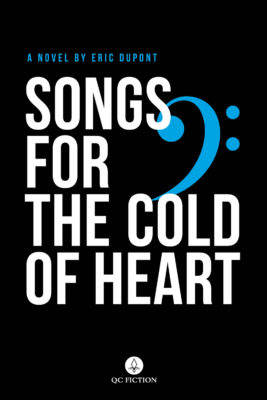 The book opens in the late 1950s in the town of Rivière-du-Loup – “known as Fraserville,” we’re reminded. The Quiet Revolution is not far in the future, but surely unimaginable to the Lamontagne family as they gather in their home that doubles as a funeral parlour. Among the decor is “a ghastly ashtray mounted on an honest-to-goodness moose leg.” It’s the sort of working-class interior immortalized in the Quebec photographs of Gabor Szilasi; that Dupont describes it in such detail is no random choice, but a tip-off to the immersive strategy he sustains over 600 pages.

Patriarch Louis “The Horse” Lamontagne, on this particular evening, is regaling his children with the story of the entry into the family, some forty years earlier, of the titular fiancée, a glamorous young woman (“An American! Just imagine!”) who had a galvanizing effect on her adopted community, and one of the family tree’s many Madeleines. The Great War was nearing the end, and accelerating change was about to descend on the unsuspecting townsfolk.

To take a review much further into Dupont’s elaborate narrative construction would be to cheat readers of the novel’s main pleasure: the organic way it fans out from the micro to the macro and back again over the span of a century, taking what we’ve been conditioned to think of as a parochial society – indeed, Fraserville in 1917 is replete with the classic types, including a priest with less than pure designs on some of his flock – and reminding us that things are seldom so simple.
War, especially, looms large – as the agent of destruction and untold grief, but also, for communities like the Lamontagne’s, as a window onto the world. A mention of returned soldiers “who had seen Paris with their own eyes” doesn’t have to spell it out: these young men have knowledge of things that the local heads of church and state would just as soon they’d forget. But the tide cannot be stopped.

Dupont has drawn comparisons to John Irving and Gabriel García Márquez, but a more fitting spiritual antecedent might be something closer to home – Lachine native Saul Bellow’s The Adventures of Augie March, another big-remit novel by a son of Quebec. To say Songs is as good as that 1953 classic would be a bit premature, but simply to have placed the two in the same mental postal zone without too much strain feels remarkable. For now, let’s say that to the ranks of sui generis epics on life in Quebec – Yves Beauchemin’s The Alley Cat, Gordon Sheppard’s Ha! – we can add another.

Now, back to the matter of those sixty thousand copies already sold. An informal survey taken among Anglos in this reviewer’s social and professional circles indicates that most of us were, at best, only vaguely aware of the Dupont phenomenon as it was happening around us. One therefore senses that Quebec literature’s reputation as a two-way street hangs somewhat in the balance here. Given that Peter McCambridge’s translation does the best thing a translation can do, achieving a readability that doesn’t call attention to itself, Songs for the Cold of Heart’s reception in English will be a fascinating case study. mRb