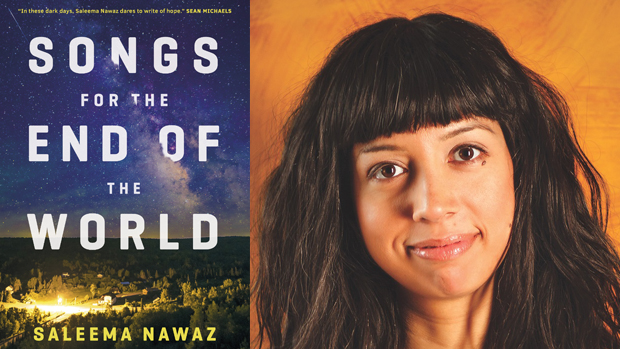 Songs for the End of the World

We’re in a tender moment as consumers of art and media. Many of us don’t want to risk wading into something that might increase any feeling of terribleness. We don’t want to be reminded of our mortality. We turn to art to escape from – or at least to help us process – these feelings.

I must be honest: I was apprehensive about reading Songs for the End of the World. I worried about it being more coronavirus realness than I could handle. Instead, this New Normal we’re living in worked to reduce the tension in the novel. The dread of contracting a possibly incurable virus was diminished, and I could focus on the story, the characters, and their relationships. I related to how they were experiencing this moment, more than anything else. When I confessed this to Nawaz, she answered: “I’m glad it didn’t bum you out.”

Flipping this concept back to the author, one might wonder if spending five years researching the predictability of a pandemic would leave her prepared to live through one. “At the beginning, I was maybe less shocked by some of the things that were happening than other people,” Nawaz says. “But at the same time, I was shocked by the surreality of the situation: to have written this book and having it come out at this moment.”

That said, Songs for the End of the World is about hope and the human condition, and it’s the farthest thing from films like Contagion or other such disaster/pandemic fare.

Songs for the End of the World is set on the East Coast of the United States, centred around a handful of mostly academics, their lovers, and parents, who reside in New York City and small-town Lawrence, MA. Each chapter bears the name and year of a different character at a different moment in their lives, from somewhere in 1999 to the near future
of November 2020.

Nawaz’s writing is flawless and modern, and the presence of this subject matter displays a certain attunement to a cultural present.

The novel opens in August 2020 with Elliot, an underachieving New York City first responder, who is forced into self-isolation in the very first chapter. At another moment, the idea of being sequestered to your own apartment for three weeks might seem shocking. But having lived through a nationwide quarantine order removed that shock and normalized whatever frustration might have been intended. 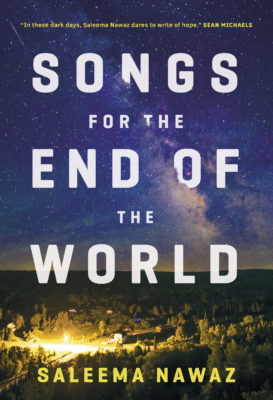 Songs for the End of the World
Saleema Nawaz

A curious string of tension is the story of patient zero, the so-called ARAMIS Girl, her blurry photo posted everywhere as scientists and epidemiologists search for a cure. Edith is a foreign exchange student from China, and it’s not clear if she herself knows her status,  since she is asymptomatic but suffers through a growing nationwide anti-Asian sentiment.

Human behaviour is surprisingly, and, sadly, predictable. But what lies within Songs for the End of the World are nuggets of hope that maybe we can improve or amend human behaviour to rely on each other in different ways.

Perhaps the character who finds the greatest redemption is Owen, a “self- styled pandemic expert” and extreme philanderer who has recently published the (delightfully meta) blockbuster pandemic-themed novel How to Avoid the Plague. Owen, seemingly the story’s protagonist, is the character you’ll love to hate: highly successful, morally bankrupt, and empowered by his unbridled white cishet maleness.

Did Nawaz ever think the media would come to her for coronavirus advice, as an expert in the field? She says:

No, never. But I think there was a moment in the early imagining of the story where I did partially arrive at the idea of a real pandemic following on the heels of a fictional one by imagining myself as Owen writing a plague novel, and then – knowing that epidemiologists have long been warning about the looming threat of the next pandemic – imagining a real pandemic following soon after, almost as the next logical step, and then, finally, imagining how that would feel for him. I think there’s an iterative process to imagination that comes into play where you keep taking things to the next level of “What if?”

Nawaz’s writing is flawless and modern, and the presence of this subject matter displays a certain attunement to a cultural present. Harried clinical trials in the desperate search for a vaccine or cure. Corporations using the pandemic as an opportunity to rebrand themselves as sympathetic agents, jumping on the chance to sell us some merchandizing tie-in. Elite panic and capitalizing on widespread fear.

There are inevitable parallels that are eerily accurate in our COVID-19 moment: worldwide spread, public instruction to stay indoors and avoid close interactions, wearing a mask, having our groceries delivered, and ordering everything else online. Songs for the End of the World also has thankfully imaginative departures: extreme viral potency, possibility of death within twenty-four hours, violent rejection of clinical vaccines, a sprinkling of societal collapse in New York City, and a noticeable void in the omnipresence of video conferencing.

Another stark parallel in Songs for the End of the World is the concert that essentially brings the virus to Canada – a well-meaning SARSStock-like event spearheaded by characters Emma and Stu’s wildly popular band Dove Suite – which ends in the immediate, widespread transmission of the virus, then chaos and tragedy. This highlights at once the incredible power of music to bring people together, and the grotesque arrogance of the music industry to put on this sort of show in the first place. But after having her first baby amid the pandemic, then being faced with a personal tragedy of her own, Emma reconnects with her audience when her track “Song for the End of the World” is released and becomes the anthem for their
New Normal.

While it’s not likely that the Western World is presently capable of such a kumbaya moment, there is something to be said about the type of art that we might need. Nawaz observes: “I have some friends who are like: ‘I want to read your book, but it just feels too close right now,’ which I totally under- stand. But then I think more people that I’ve talked to who do want to be in the moment or consume art or experience art that does reflect their current experience.”

Unsurprisingly, Emma is the character Nawaz was most invested in. “Emma had the most material that ultimately did not make it into the novel,” she explains. “In a way, she’s the least connected to the other characters, so I had cut the most from her, even though probably when I began she was more the protagonist or at least the spiritual protagonist. She’s the character who turns to art. Her human connection is through her writing and music, and I identify with that.”

Connected by family and relationships, both professional and romantic, Songs for the End of the World takes a loose web of acquaintances and tightens it into a knotted social weave that connotes the importance of community, belonging and togetherness. These are the pivotal moments in Nawaz’s characters’ lives that drive the story forward.

The idea of human connection and hope being important for getting through the crisis is something that I hope comes through in the novel, and also that in ten years it’s remembered for being a good enjoyable read as opposed to just being a kind of accurate prediction.

At the end of the day, there remains the small personal problems: relationships, love, family, work, successes and failures, and how people react to these moments that inform our lives, regardless of the shit blizzard that storms around us. mRb