A review of Spaniel Rage by Vanessa Davis

Cartoonist Vanessa Davis made a big name for herself in 2010 with Make Me A Woman, a relatable, endearing, and funny book. Spaniel Rage, which was Davis’s first attempt at comics, contains hints of her work to come. The collection, reissued this year by Drawn & Quarterly, was first published by a smaller press in 2005 and features Davis’s illustrated journal entries between 2003 and 2004, along with some short comics from the same period at the end.

Davis drew these passages in her sketchbook journal as an exercise and it’s unclear if she knew at the time that she would have an audience for them. Without a plot, the book is constructed by chronicling small moments from each day. Davis’s sometimes barely legible captions are candid and uncensored, and sometimes speak directly to the world outside of her sketchbook with phrases like “oh yeah baby I drew my butt for y’all.” These daily snippets leave big gaps for the reader to fill in. In trying to follow the particulars of Davis’s life, you’re jumping from lily pad to lily pad, sometimes with lengthy stretches between them. Interesting developments in Davis’s day job, for example, are just never mentioned again, leaving the reader wondering. There’s a natural flow to the passages but the book lacks that narrative pull that keeps you turning pages. 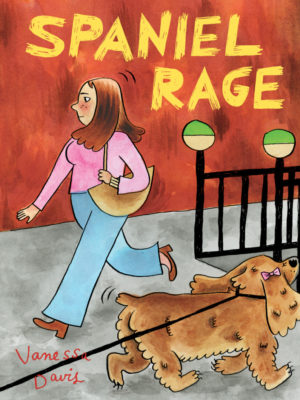 Davis’s strength is in her relatability. There’s something comforting about reading the momentous and mundane moments of someone else’s life. Davis was twenty-five at the time she made the journal, and I often found myself thinking back to that age. Spaniel Rage also brought back memories of life in the early 2000s, when mixtapes were still prevalent and desktop computers were huge.

In the small everyday details of her life – like locking herself out of her apartment or getting a haircut she doesn’t like – it feels like Davis could be any one of us. Even so, she isn’t particularly vulnerable with the reader. She frequently writes of romantic woes but never reveals the nuances of her emotions. The facts of her life stay closer to the surface. In reading other graphic memoirs, I’ve found myself crying profusely and cheering empathetically, but that kind of close connection didn’t form with Davis in this work. Reading Spaniel Rage feels like catching up with an old pal in a public place: you presume you already know the important stuff about each other and you aren’t going to bring up the really personal subjects in that setting.

The strongest and most compelling aspect of this book is the artwork. Davis has a fluid, unselfconscious approach to drawing that is refreshing in its looseness. Illustrations are rendered almost entirely in what appears to be mechanical pencil, and Davis skips any “roughing in,” making the finished artwork on first attempt. The rules of perspective are ignored and the world feels like it’s constructed entirely out of memories, malleable and flawed. Davis’s approach to drawing is distinctly her own.

Spaniel Rage is a pleasant read for those spare minutes of the day, waiting for the metro or just before falling asleep. The book doesn’t deliver a flashy, memorable ending, but the artwork will stay with you for a long time.

Meags Fitzgerald is a Montreal-based illustrator, author, and speaker. Her books include Photobooth: A Biography and Long Red Hair.