A review of Speaking Memory by Edited by Sherry Simon

Speaking Memory: How Translation Shapes City Life, edited by Concordia University professor Sherry Simon, collects scholarly perspectives on the multilingual city, ranging from historical and political to activist and creative points of view. Readers in Montreal will empathize with the idea of a city that operates on more than one linguistic plane, with vastly disparate lingual experiences and narratives that coexist and interact, and the disenfranchisement that can occur when languages are in conflict. Whereas the polylingual city is often coded as positive, as a vibrant, multicultural arena, these essays highlight that it also exists in a constant state of translation, with the concomitant potential of mistranslation, misrepresentation, and even suppression. As Simon summarizes, “Multilingualism points to pure diversity, the number of languages spoken, but translation speaks to the relations of tension, interaction, rivalry, or convergence, among them as well as the particular spaces they occupy in the city.”

This is a substantial volume with a wide spectrum of essays and it is impossible to do justice here to each author and argument; however, the book is structured around three main concerns. In the first section, various multilingual cities – Vilnius, Trieste, Prague, and urban spaces during the Habsburg reign – are studied as geographical palimpsests, considering the layers of linguistic memory that grow over, replace, and compete with one another. For example, Vilnius, the capital city of Lithuania, has, over time, been baptized as Wilno, Wilna, Wilda, Vilna, Vilno, and Vilne. As Laimonas Briedis writes, it is “a place of runaway translations.” These names represent the city’s history of violence, colonization, war, and religious antagonism. A useful dichotomy for reading multilingual cities is the coexistence of horizontal and vertical translations – whereas the former embraces the intersection of languages, of Babylonian multiculturalism, the latter unearths the painful memories of dissent inherent to linguistic plurality, thereby defining the fraught identity of a city like Vilnius. 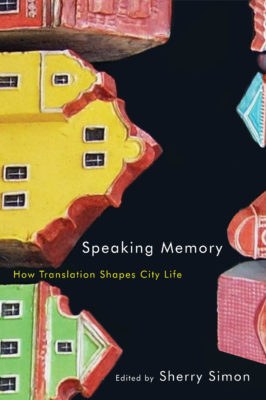 In the second section, movement enters the translational city as a vector of either connectivity or constraint. The conditions under which a speaker enters a city have a major influence on that speaker’s subject position within a community and the resultant modes of communication that are allowed. As Simon Harel points out, “Translation is not the inevitable outcome of plurilingualism.” A migrant, for example, embodies the potential of linguistic reciprocity; Michael Cronin notes that the continual mobility of migration enables a fluidity of translation. The migrant introduces language to a space, assimilates language from that space, and exits to be lingually influenced by the next space they enter. In contrast, the refugee is framed within a deterministic mode of language acquisition. Harel argues that the “refugee who is ‘charitably’ welcomed into a community is obliged to compromise his or her linguistic idiom and make it an instrument of negotiation”; the refugee is ultimately trapped within a monodirectional, static field of communication, of being translated.

The final section explores what Simon calls “the generative powers of multilingual milieus,” such as New Orleans, Montevideo, São Paolo, and Montreal. This section studies the multivocal literature and art inspired by the gap between coexisting languages, bridging the variety of rhythms and textures present in pluralistic urban spaces. Andre Furlani’s concluding essay, for instance, absorbs the democratic texture of different languages on a walk through Montreal; the excursionist experiences language, but never stops to listen, compare, and impose interpretation.

Overall, Speaking Memory is a well-researched and engaging anthology intended primarily for an academic audience. While the subject matter is at times restricted to a small niche of inquiry, the scope of the collection is ambitious, emphasizing the omnipresence of language and the fact that it is truly a central force when it comes to experiencing the multiplicity of the city. Language translates the city.