A review of Sports and Pastimes by Jean-Philippe Baril Guérard

“Down here, we’re all going to hell and we know it, no need to warn us.”

This crucial bit of information comes on page one of Sports and Pastimes, the first of Jean-Philippe Baril Guérard’s novels to be translated into English. It is delivered by the unnamed protagonist and narrator, a rich, twenty-two-year-old actor at the top of her profession in the entertainment industry in Montreal – “this small town of a city where everyone’s worked with everyone and slept with all their sisters.” For the next 203 pages, the reader will occupy a privileged place inside the mind of a young star of the stage and screen, reading all her uncensored thoughts and unfiltered judgments. It isn’t going to be a comfortable ride. 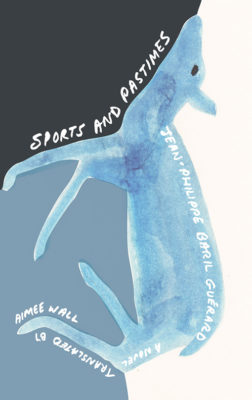 The narrator’s two closest friends are Félix-Antoine and David – the three of them came to fame together on the set of the hugely successful television series Triplet. Despite having acted in any number of other successful films, theatrical productions, and television shows, she is cursed with being constantly recognized as “that girl” from Triplet, “a low-end production with scripts sanitized by educational consultants and social workers that charmed a whole generation.” Aided and abetted by her two friends, she freely indulges in the “sports and pastimes” of the title: nights of frenzied consumption of cocaine, alcohol, and easy hookup sex, followed by mornings of gruelling physical workouts. Rock climbing, cycling, yoga, swimming: all activities that seem to serve as penance for the excesses of the night before. Work, such as it is – film overdubs, commercial voicing – takes up only a few hours of her week, although she is remunerated outrageous sums.

While the protagonist’s lifestyle suggests she has reached the epitome of mainstream success in Québécois culture, her first-person narration of Sports and Pastimes amounts to a scorching condemnation of that culture’s destructive inner logic. The smooth workings of this machine are temporarily upset by the introduction of Gabriel, the director of photography on David’s first feature film. The protagonist initiates a hookup with Gabriel at a karaoke bar one night, has unsatisfying sex with him (as usual), and would have promptly forgotten about him, as she’s forgotten about so many others, except that Gabriel decides to hang himself a few days later. Gabriel, who sports a stag’s head tattoo on his chest and whose Facebook profile picture is a cartoon deer head, becomes conflated in the protagonist’s mind with a twelve-point stag that Felix-Antoine hits with his jeep during a cocaine-fuelled and entirely pointless nighttime trip back from her chalet.

Her interest in Gabriel isn’t at all about the person he was, though – her interest is entirely in the fact that he is dead, beyond reach. Only upon learning of his death does she allow herself to fantasize about a potential love relationship. She begins obsessively text messaging his Facebook Messenger account:

Yet in the end, even this kind of self-revelation is only possible for her if there is no one listening, no one to respond, no danger of an actual connection.

In her excellent translation of the novel, Aimee Wall chooses to retain certain elements of Québécois inflection, expressions and turns of phrase that don’t necessarily make sense in English. The result is a greater intimacy for the reader, as if one were listening to the voice of a woman who is fluently bilingual, who has a trace of an accent, and who assumes that as she speaks, the reader will know what she means. mRb