The Many Voices of Resistance

A review of Stories of Oka by Isabelle St-Amand

Winston Churchill once said, “history is written by the victors.” If any historic event was to challenge the wisdom of the colonial British Prime Minister, the standoff between the Kanien’kehá:ka (Mohawk) of Kanehsatake and Kahnawake and their allies against the Quebec and Canadian governments is a fitting candidate.

In analyzing the writing, art, film, fiction, and facts surrounding the so-called Oka Crisis of the 1990s in Stories of Oka: Land, Film, and Literature, Isabelle St-Amand shows that history is explored via many winding, complex, and at times contradictory paths and not the broad boulevards historic winners stroll in their victory parades.

On July 11, 1990, twenty-eight years ago, Sûreté du Québec officers raided a blockade in Kanehsatake’s pines adja- cent to the town of Oka after Mayor Jean Ouellette insisted a golf course be expanded regardless of the Mohawk resistance or the Indigenous burial ground that was in the way. If the previous sentence is unfamiliar, it’s time to do some reading. 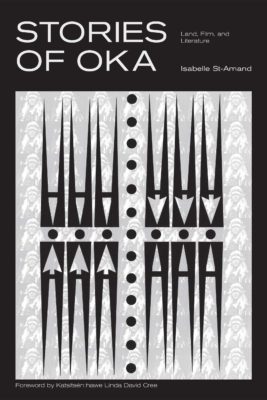 St-Amand’s book, a thoroughly researched examination of prior writing, film, and other art produced with the crisis as its theme, features the voices of those who lived through the summer of 1990, and those who reflected, wrote, or created work with the Oka Crisis at its heart in the years that followed. It is not a straight-up chronicle of the events like John Ciaccia’s The Oka Crisis: A Mirror of the Soul (2000) or Geoffrey York and Loreen Pindera’s seminal People of the Pines: The Warriors and the Legacy of Oka (1991). Rather, it examines those and many other works and voices, and analyses how they fit into historic frameworks of colonialism and settler-Indigenous relations.
St-Amand has a keen eye on how land and its mistreatment are the central motivating factors for the Kanien’kehá:ka resistance

If the description sounds dense, it hits the mark. St-Amand’s book stems from PhD research at UQAM, and took six years to complete. It delves deeply into the event and first asks what happened, followed by: How was it covered? How was it filmed? How was it written about? She examines, for example, Alanis Obomsawin’s film Kanehsatake: 270 Years of Resistance as a means of charting the history leading up to 1990 and showing the community’s centuries-long struggle.

The book is academic in nature, and casual readers may find it turgid, but, if one has the patience, it is worth a study. With a close reading, one gets a solid timeline of the 1990events, and also an analysis of how others looked at the crisis in French, English, and Mohawk communities.

St-Amand has a keen eye on how land and its mistreatment are the central motivating factors for the Kanien’kehá:ka resistance, which is important for mainstream Canada to understand when reflecting on 1990.

What makes St-Amand’s book unique is its collection of perspectives from both within the communities and outside its borders. St-Amand uses the words from the people of Kanehsatake and Kahnawake, as well as those of the politicians, Sûreté du Québec, and army officers on the other side of the blockades. Her bilingual skill gives her the ability to dive into both sides of the event.

In insisting that others tell the story, St-Amand avoids risking cultural appropriation, or sounding like she is telling the story. This is important because contemporary historians and anthropologists must avoid appropriation or false authority on subjects lest they sound like the colonial authorities of a century ago, who made claims that sound true, but, when analyzed, fall incomplete at best and irresponsibly naïve at worst. mRb

Daniel Rowe is an award-winning journalist and photographer and assistant editor of The Eastern Door newspaper in Kahnawake, Quebec.