Stories of Women in the Middle Ages

The Middle Ages might be the historical period about which we have the greatest number of misconceptions: the people at the time did not believe the world was flat, there was a vibrant literary and intellectual culture, universities were created, and women were not always silent.

In Stories of Women in the Middle Ages, independent scholar Maria Teresa Brolis seeks to introduce the lives of women in the Middle Ages by telling the story of sixteen women who lived between the twelfth and fifteenth centuries in France, Germany, Sweden, and Italy. Eight of these – Hildegard von Bingen, Raingarde de Semur, Héloïse, Eleanor of Aquitaine, St. Clare of Assisi, St. Bridget of Sweden, Christine de Pizan, and Joan of Arc – are still famous today, but the other eight are unknown, ordinary women whose lives are uncovered through their wills and other archival documents. These last eight all lived in Bergamo, a city in the Italian Lombardy region, whose records the author has pored over extensively. In many ways, the last eight chapters are more interesting than the first because they delve into a subject we know little about – the ordinary lives of medieval women. 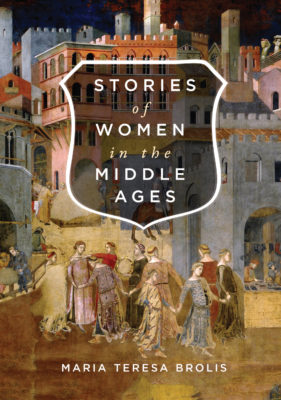 Some of the chapters, however, are not properly “stories”; rather, they focus on a specific aspect of a woman’s life. For example, the Héloïse chapter only tells of her youthful love for Abélard, even though she later deftly managed a new abbey and made it flourish. Likewise, the “unknown” women she lists are mostly launchpads to discuss, with greater liberty, various aspects of femininity, such as marriage, caregiving, poverty, and even witchcraft. These chapters also bring forth interesting asides, like the idea that the female condition started changing in the twelfth century in conjunction with the rise of Marian devotion.

As the book is meant to be a layperson’s introduction, it is quite short. The tone is very informal, using each woman’s first name to create intimacy, and there are no notes of any kind. While these qualities make it an excellent first book to read on the subject, the brevity also brings its share of problems: because Brolis cannot explain everything, some causalities are not always clear, such as when she writes, “Hildegard’s choice to accept only girls of noble birth in her convent – a controversial choice, but commendable in its results, because art in Bingen played the leading role in monastic life,” to explain the reason behind some accusations. Similarly, perhaps in an effort to keep things simple, Brolis calls Abélard a “university professor” when the University of Paris emerged about eight years after his death. Simplifying a story to appeal to a larger audience should not give an author leave to use the wrong terms.

Joyce Myerson’s translation from the Italian also has a few issues: the text goes from the past tense to the historical present (sometimes within single chapters), a verb tense that is much more common in Italian than in English. Furthermore, some passages might have benefited from a translator’s note, such as when Brolis gives the etymology of the word “witchcraft,” which doesn’t correspond to the etymology of the English word. One can only assume that she was talking about the Italian word – stregoneria.

Stories of Women in the Middle Ages should be read for what it is – a brief introduction – but should by no means be used as a single source of information. The book does include a bibliography (though many of the books cited are in Italian, even if some of them have existing English translations) that can help readers expand their knowledge and delve into the Middle Ages. mRb